The Feast of the Blessed Sacrament, July 31st thru August 1th, 2014, Reviewed

Margaret Mullen|August 12, 2014
Live, Slideshow
The Feast of the Blessed Sacrament 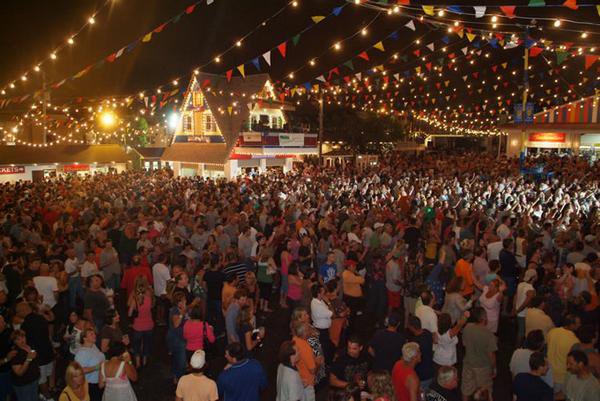 You know you are from New Bedford if you already have plans the first weekend in August 2015. The Feast of the Blessed Sacrament (Body and Blood of Christ) a.k.a. Portuguese Feast, a.k.a. Madeira Feast has been celebrated in New Bedford since 1915 and is the largest festival of its type. Madiera wine and Portuguese rolls are in abundance (body and blood). This year marked the 100th celebration and 300,000 tourists were expected to visit our city with over 100,000 people participating in the festivities – aromatic and delicious Portuguese food (cacolia, carne de espito self-cooked over the large fire pit, fava beans, linguica etc.), Madeira wine shipped in barrels directly from the Island of Madeira, rides, games and MUSIC.

Musical entertainment has always been a big part of the Portuguese Feast. Numerous stages are set up throughout the grounds so whether you like Alternative Rock, Heavy Metal, Folk, Country or authentic Portuguese music & dance you are certain to be entertained. Every year there is a headlining act but this year, being the 100th anniversary, there was more – Gin Blossoms (Thursday 7/31); Blood Sweat & Tears (Friday 8/1) and Phil Vassar (Sunday 8/2).

The Gin Blossoms sounded great, pretty mellow and pleasing to the mixed-aged crowd. Lead singer, tambourine playing, Robin Wilson, is very thin and looked stylish and fresh in his buttoned-up brightly colored polo shirt, super skinny jeans and fedora. At 49 years old he works the stage like a twenty something. The Gin Blossoms remind me of the early 90s living in NYC – working in Manhattan, dating my husband and going to the Hamptons on the weekends. It was a really fun time and the Gin Blossoms music was lively and upbeat.

In the past, music was about the sound, the rhythm and less about the lyrics. If it was upbeat and danceable I liked it. Now, of course, I hear music differently. I often read the lyrics before I listen to a song and the Gin Blossoms have many great song and the lyrics have depth and often speak of love that is never easy or mutual or are about impending doom of love but they are not full of despair. There is some hope, though not for their best writer Doug Hopkins who commited suicide in 1993 at the age of 32 years old.

The set list included: Follow You Down, Somewhere Tonight, Miss Disarray, As Long as It Matters, Found Out About You, Until I Fall Away, Learning the Hard Way, Lost Horizons, Allison Road, Don’t Change for Me, I’m Ready, Wave Bye Bye, Til I hear It From You, Hey Jealousy, Dead or Alive on the 405 and 29.

Here is a sampling of the lyrics from their set list Thursday night at the feast: Let’s not do the wrong thing and I swear it might be fun; Let’s hold the candle and see which one gets burned; There’s no pretending that happy endings will ever see me through; I’m like a broken record that you can play repeating as if it matters; the love I thought I’d won you give for free; Waiting far too long for something I forgot was wrong; I wonder what you’re dreaming why we’re half way cross this bridge we’ve come too far to turn back we’re just too close to quit; Drink enough of anything to make this world look new again drunk drunk drunk in the gardens and the graves; So she fills up her sails with my wasted breath and each one’s more wasted than the other you can bet; You will be free but you gotta run You can make it up that hill you gotta know you can have anything you gotta be the best that you can be; to want and never grow in delusion of control the hardest part is getting old … so hang your hopes on rusted-out hinges take ‘em for a ride only time will tell if wishing wells can bring us anything or fade like scenes from childhood dreams forgotten memories only time will tell.

There is a progression to their music just as we age. The crazy love when we’re younger, too much partying, self-loathing, achievement, being comfortable in your skin. Would have liked to see them end on a high note with Don’t Change for Me off of their 2010 album No Chocolate Cake but that would mean the story had a happy ending and happy endings are boring/elusive (that’s not my opinion) so they ended with 29 because only time will tell. Gin Blossoms have been working on a new album and are scheduled to release it this summer. Look forward to the new release and wonder about the evolution of the lyrics.

Quanto mais as coisas mudam, mais elas permanecem as mesmas. (English transalation: The more things change the more they stay the same.) The sea has always been a huge part of my life. As a child growing up in New Bedford, Massachusetts, my life revolved around the beach. We would leave early in the morning stopping at the bait store first to get worms for my dad’s fishing. Mom would make breakfast on the grill, pack sandwiches for lunch, grill again for dinner and we would stay until dusk. Throughout high school and college it was much of the same but with my girlfriends and now, having children of my own, I still head to the beach with my girls for a half day of swimming, hiking and biking … followed by the fun with friends.

You’ve got to sing like you don’t need the money, Love like you’ll never get hurt, You’ve got to dance dance dance like nobody’s watchin’, It’s gotta come from the heart if you want it to work …

… is apropos for one of my favorite local cover bands back in the 90s – the Funky White Honkies. As luck would have it, they were doing a concert on Pier 3 Friday evening at 6P. Dinty Child is the front man for the eclectic group of musicians and back-up singers whose history began over thirty years ago in Westport, Massachusetts. FWH started out as a bunch of friends getting together to jam and have fun until they played at a friend’s birthday party and thought maybe we got something here. The rest is history.

The Funky White Honkies have thirty to forty singers and musicians on a rotating basis dependent upon location and who is available for the gig. On Friday, I counted fifteen including several singers (including Dinty), four on the horns, couple on the bongos, electric guitar, bass guitar, no one of the keyboards, washboard and Jack on the Tambourine singing high energy songs like Expressway to Your Heart by Soul Survivors, Rich Woman by Robert Plant & Alison Kraus, Piece of My Heart by Janis Joplin, Domino by Van Morrison, and finishing up with Hully Gully by The Beach Boys.
There are several things I find endearing about the band. According to Dinty, not surprisingly, they have never used a set list and instead wing it often with side conversations and musicians putting down their instruments to sing a song. The band hasn’t had a rehearsal in three years because the music isn’t about proficiency it is about having fun. FWH’s eclectic fan base – men, woman and children of all ages – dancing like no one in watching, is some of the best people watching around. A couple’s public dance choice brings Johnny Cash’s I Walk the Line to mind because they are dancing the lines in the parking lot. The woman who danced seductively in the middle of the horn section when they came into the crowd, the young boy who got the party started and the almost 90 year old woman that I hope to be dancing like when I reach her age. The Funky White Honkies did not disappoint.

We were having dinner a little while back with friends in New York when one of them started singing “You Made Me So Very Happy” at the top of his lungs (yes, I joined in) and I was trying to remember who sang it. My first guess was Lou Rawls. Ended up it was Blood Sweat and Tears (BST) – a name not befitting for the style of music (jazz-rock) in my opinion. Remember reading somewhere that they thought it was a good name because of what they put into their music (taken from a Johnny Cash album named the same). In any case, I got hooked on the sound. The horns are incredible and after doing research listened to other somewhat similar bands with horn sections (KC & the Sunshine Band, Chicago, EWF, Phantom Blues Band, etc) but none of them came close to BST except maybe for Average White Band (ABS) and The Mighty Mighty Bosstones.

Fast forward a few weeks … I had no idea Blood sweat & Tears were playing at the Portuguese Feast on Friday night until my friends told me Thursday night. They opened with I Love You More Than You’ll Ever Know – an incredibly soulful song. The lead singer’s voice was nothing like Al Kooper’s but it still sounded amazing. I had no idea Bo Bice (American Idol runner-up to Carrie Underwood) was the front man. His voice is more blues-y than smooth and sultry but Bice did a fantastic job leading the musically tight band. Caught about four songs and was disappointed to miss Spinning Wheel and You Made Me So Very Happy but I just could muster up the energy for another late evening but what a fun weekend in New Bedford, Massachusetts!