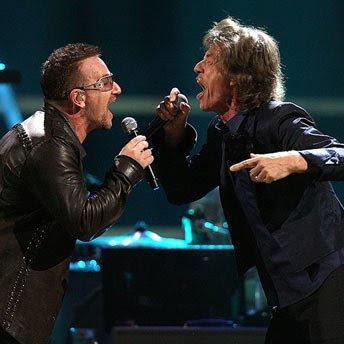 I couldn’t get a tix to yesterday’s concert but reading the review in the entirely unbiased Rolling Stone it sounds pretty good.

Arethar Frankin and Annie Lennox singing “Chain Of Fools”
Jeff Beck covering “A Day In The Life”
Metallica and Lou Reed singing “Sweet Jane” and “White Light/White Heat”
Metallica and Ozzy Osbourne playing “Iron Man”
As I predicted Ray Davies came out to join in on “You Really Got Me” (though it was his brother who played the guitar lick).
U2 bringing out Bruuuuuce and Patti Smith to play “Because The Night”
Bono acting like the smug asshole he always is, and here is part of a long speech (an if RS are calling it a long speech it musta gone on forever). Here’s the quote from the RS webside though if you wanna skip it I’ll understand entirely: “Here in rock & roll’s great cathedral, Madison Square Garden, think about all the pilgrims and pioneers that got us all here, the saints and the heretics, the poets and the punks that now make up the Hall of Fame. It’s a dangerous thing, this business of building idols, but at least, rock & roll is not at its best about worshiping sacred cows. It’s about thousands of voices gathered at once in a great unwashed congregation, like tonight. For a lot of us here, rock & roll means just one word: liberation. Political, sexual, spiritual liberation”.
Mick Jaggar and Fergire singing “Gimme Shelter and ending the song face to face in the middle of the stage jumping up and down. That’s what reminded me of Live Aid as well -though, with all due to respect, Fergie’s no Tina Turner.

Sounds like a fun night and on HBO on the Friday after Thanksgiving. Basically, day one covered the 60s and 70s, day two the 70s and 80s.