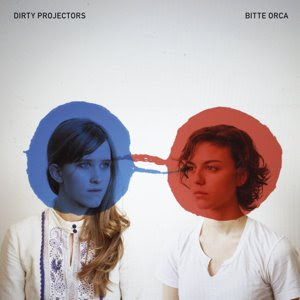 I think the album of the year is settling into either “Far” or “Bitte Orca” If “Far” is a hit I’ll go with “Far” if not it is the Dirty Projectors for me… What? I would prefer the music even though the music wouldn’t change. This is the MJ lsson from last week: a mass audience makes the personal universal, we share MJ or the Beatles with the world so any “We Are The World” or “All You Need Is Love” anthem has much added resonance with the world listening to it. All of MJ’s work from “Off The Wall” to “Invincible” gains meaning thru mass media.

As good as “Begin To Hope” was, it was better because its audience found it. As good as “Far” is -and I adore it- songs of alienation like the opening “The Calculation” or the ineffable “EeT’ will gain strength from its audience. “Bitte Orca” has already made its pop move: Dirty Projectors follow-up to the fine in itself “Rising Up’ is a huge leap into the pop mainstream while giving up little of its artistic integrity.

Not that Spektor gives up anything either. This? Overproduced? How? I’ve listened to “Far” time after time and all I can here is her vocals and piano, everything else is shading and color. At no point do such kitchen sink producers as Jeff Lynne and Mike Elizondo overwhelm the songs, Marie Lynn was complaining the fucking around in the background of the long term relationship song “Folding Chairs” got in the way on the cleaner keybs only live version but I just don’t see it. Does the song need the hand claps and drum cymbals help the song? Not really but it does nothing to help them. And on songs like “Machine” and “Dance Anthem Of The 80s” the production is the point of the song. “Bitte Orca” has a unique sound: it is all dischordant Roches like harmonies and Coltraney guitars (i know im mixing my musical metaphors but if you heard it you’d know what I mean), Dave Longstreth makes a sound like nobody else.

Both albums are strikingly consistent. I have eighteen songs on my “Far” -the bonus tracks plus live “Folding Chair” and the earth shattering “Ink Stain”, ten songs on my “Bitte Orca”, the nine you know plus an acapella “Stillness Is The Move”. “Far” The first four songs are relentless in their commercial possibilites though what might stop them is the lyrical oddness; it is an odd trick she does, writing impossibly coy lyric that hides these distanced and disturbed stories in kitsch and cutesy language. Over and over again, everything seems to be getting scarier: the weirdness a tenchnic to help us swallow her bitter pills. Dave Longstreth is Zen like in his patience -in his songs as well, there is a sense of things unfolding and meanings becoming inscrutable and the more you scrutinize them the less sense they make. The best I can make of the title is either “Please Killer Whale” or “Patience Killer Whale” -makes sense to me.

There isn’t an ordinary song in “Bitte Orca” . “Temecula Sunrise” -about embracing the change around you stands out for want of anything else. “No Intention” is a revetting opening riff, “Stillness Is The Moment” is a seriously moral expression as to how one lives ones life.

“Ink Stain” is more than a moral expression, it cuts through to the heart of humanity, it takes that which we know and illuminates it anew. Perhaps Regina Spektor was worried the song would sink the album; perhaps it is so strong that even next to magical works like “Genius Next Door” it would be uneven. It is hard to express strongly enough my admiration for “Ink Stains”. The stains in question refer to the tattoos on Austweitz prisoners hands and there is no question of any quirkiness in the Russian Jewish Spektor’s presentation. At the Beacon it soared right into your heart; it reaches places where even the greatest of music rarely goes. there is no antecedent that comes immediately to mind. Just piano and Spektor and everything you think you know about how she writes a song disappears. Perhaps a comparison might be Gerhswins’ “Porgy And Bess,” not thematically and not musically but in their shared attempt to get to the heart of the matter, maybe “I Loves You, Porgy” or “There’s a Train Dat’s Leavin’ Soon For New York” . They share an illumination of a very dark place. Here is the lyric to “Ink Stain”:

“All the Holocaust deniers
To a bathhouse warm and quiet
Complimentary soap, complimentary haircut
And gas them up until they know that
All the ink stains on their wrists mean business
And God is the almighty witness
I wish they’d cure the friendly neighbors
Of the disease which makes them haters

All the Holocaust deniers
In a bathhouse warm and quiet
Complimentary soap, complimentary haircut
And gas them up until they know that
All their ink stains on their wrists mean business
And God is the almighty witness
I wish they’d cure the friendly neighbors
Of the disease which makes them haters”

The album couldn’t have sustained it I don’t think. Like Paul Simon’s “The Late Great Johnny Ace” took over “Hearts And Bones,” “Far” could never have recovered. Maybe as the last song. But listening to stuff here like “Laughing With” or “Blue Lips” or “Wallet” -they just sound a little weaker: good stuff, important stuff, but not this.

“Bitte Orca” has the same edge of importance though more musically than thematically. Taken together you are looking at 28 songs of sustained excellence. Buy them.

I have nothing left to say.