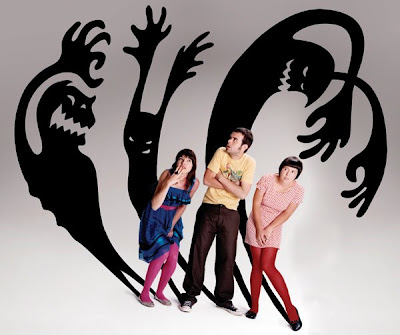 American Saturday Night – Brad Paisley
Her Diamonds – Rob Thomas – Fine version on NBC’s Macy’s Firworks last night
Living Doll – Cliff Richards
Physical Attraction – Madonna
Science Is Golden – The Grates
Trampoline – the Grates
Inside Outside – The Grates – Imagine Bikini Kill without the politics, Sleater-Kinney without the chops, Black Kids without the rhythm section. A real good pop-rock band with a charismatic vocalist. They haven’t released any new music in years but they are doing a Wednesday night residency at Pianos in July.
There’s A Guy Works Down the Chip Shop swears He’s Elvis – Midnight Howlers
Dirty ‘N’ Stinky – Ol’ Dirty Bastard
Time Turns Elastic – Phish – Phish are to prog rock what the Dead are to the Blues or the Beatles are to girl groups: it’s their starting point. Trey claims the band played this song 298 times and then pieced it together and they do achieve a keyboardy elasticity that claims the high point from, say, Yes, and it explands it without a hint of pretension with a witty indeed keyb having it all over the guitars till well into the ninth minute.
Heaven Can wait – Michael Jackson
Real World ’09 – Rob Thomas
Into White – Cat Stevens – From his best album “Tea For the Tillerman” “Into White” is a strange, pretty late Sunday afternoon song: a fairy tale with a hint of menace: “A sad Blue eyed drummer rehearses outside, a black spider dancing on top of his eye .” Like a pleasant enough dream just before it dissolves into a nightmare
Big Tears – Elvis Costello – I remember getting this free on an EP along with “Wednesday Week” at one of his concerts in 1980. A hard rock full frontal attack on terrorism: “Hiding in the shadows, turning wives to widows.” He can’t do this any more.
Blue Turns To Grey – the Rolling Stones
Thug Story – T. Swift and T. Pain
Hear Me Calling – Bob Mould
Eat It – Weird Al Yankovic – “Get yourself an egg and beat it…”
Put Me On Top – Aimee Mann
Par For the Course – Aimee Mann – I saw Aimee play this song at an empty Webster Hall in 1995 and just blow the audience away with an extended coda (on the extended coad) that brought us to our knees. Aimee can’t do this any more and I’m not gonna pretend she can.
On The Radio – Regina Spektor
C Moon – Paul McCartney
June On the West Coast – Bright Eyes
’98 Freestyle – The Big L – Matt thinks Big L is one of the best rappers of all times. Here’s why:

I And I – Bob Dylan
Don’t Fall Apart On Me Tonight – Bob Dylan – As a kid Bob Dylan found salvation in music and thought it wasn’t enough so he went in search of the answer in Judaism and Christianity, sex, love, politics, tarot cards and psychics, philosohy and history, only to find himself back at the begining and finding salvation in music. As T.S. Eliot put it: “We shall never cease from exploration and the end of all our exploring will be to arrive where we started and know the place for the first time. ” This is from his mid-80s Judaism stage, both songs are from “Infidels” -considered a minor album at the time baffling enough- both are great songs of a deep unsettled need to manage his fame, one through communion with God, the other through communion with a person.