TV On the Radio at Central Park: Buzzworthy Band in soaking rain 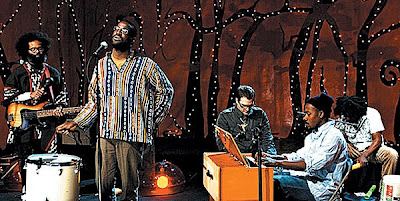 I wish I could get the picture from my cell on my blog so you could see as much as I saw of the Dirty Projectors and TV On the radio: a sea of umbrellas.

And I could’ve lived with that but it was also very very cold and I was very very wet and essentiallythe weather killed what sounded like one of the best concerts I’d heard in a long while.

It was also the kiss of death for a band like Dirty Projectors who travel the line between an esoteric art pop and an untraditional form of prog-rock. Robert Fripp would approve and Dave Longstreth should have him remix their upcoming album “Bitte Orca”.

From an acoustic Fairpoint Conventiony first song thru a penultimate one two punch of “Rise Above” (a strange, strange cover -I just went back to the Black Flag’s off their seminal “Damaged” and it was always a great song but it wasn’t THIS great song) and “Stillness Is The Movement” the band is awesome and strange though the instrumentation is rock and roll part II: keyboards, chick back up and lead, three guitars, bass and a heavy drummer in the middle of the stage but the sound is off kilter -they seem to be always singing the wrong note and the sound comes in and out so your ear never quite knows what to listen for. In a rain drenched Summerstage this was a problem.

It’s not that the Dirty Projectors were a disappointment, far from it, it was that their music wasn’t right, nobodies music except maybe Springsteen could be, for this venue on this night.

Also, next big thing or not, they aren’t quite big time yet. They haven’t made the leap TV On The Radio did last year from “Return To Cookie Mountain” to “Dear Science”. “Cookie” is a very good album and “Dear Science” is a game changer and based upon what I failed to see at Central Park (though I never relalized there are so many dfferent colors and sizes of umbrellas) there is nobody in TVOR’s league right this second. The stage was swathed in streams of dark blue and the horns howled in the night air and the band seemed to be mixing so many desperate elements. I could hear “Golden Years” in “Golden Age” and “Crying” in “Crying” and the back of my mind kept on conjuring Curtis Mayfield and the sound of absolute soul greatness.

There is a bigness to TVOR’s sound today, and live an emersion for audience and band which seems to transcend everything but the sound. A comparison might be Arcade Fire who have a similar big band (a little less back beat of course) but who were only OK at Radio city a coupla years ago because they couldn’t get out of Win Butler’s shadow. There is a collectivism with TVOR that makes em big big big time.

But I didn’t really have a good night.

The Yankees were rained out last night, why not rain out a concert? This was TV On the Radio’s opening night for “Dear Science” and it was in every possible sense a triump but the one thing they couldn’t control. TVOR was like a night at boot camp.

I am going to skip the free concert at Prospect Park and try em again this August back at summerstage. Let’s hope Odin is forgiving that night.