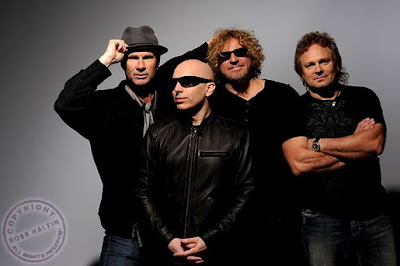 Oh Yeah -Chickenfoot
Soap On A Rope – Chickenfoot
“Got money, got fame, fast cars and everything”. Who do they think they are? Kid rock? Whatever, this should solve everybodies metal, not to mention hedonism, with a full frontal attack on your dopamaine. In my youth I tried and I tried to read Heidergger but he went right over my head, I needed Hannah Arendt to interprete him before I understood. I tried and tried to like Led Zeppelin but I couldn’t take all the fairies and stairways. I needed a less self-conscious interpretation and the trashy fun and resolutely unpretentious Chickenfoot will sure do the trick. Back in the day we called this cock rock, well choose your euphemishm it struts up and sticks its dick in your face like a bottle of 25mm Viagra on a second date. And I now officially forgive Haggar for ruining Van Halen and giving me half of here.

Daniel – Bat For Lashes
Rise Above – Black Flag
Les Nuits d”ete – Dame Janet Baker
The great mezzo soprano is at her best singing Berloitz though if you don’t know her you might want to try her “Ave Maria”. Thanks for this one Bobby.

The Crooked Line – Elvis Costello
I Know You Want Me – Pitbull
The Ballad Of RAA – The Rural Advantage Of Alberta
Stay with the RAA song, the payoff comes at the end

You Never Know – Wilco
Another slice of average country rock, ” Yankee Hotel Foxtrot” is further and further away.

Piano Concerto # 5 – Glenn Gould
Lovegame – Lady Gaga
To Be With You – Mr. Big
Golden Years – David Bowie
Back to Living Again – Curtis Mayfield
It is absolutely ridicukous that Curtis Mayfield is dead. Like Clapton said when he picked up his grammy for best album, “This belongs to Curtis”. This brilliant song (with Aretha singing along) is from his outstanding last album “New World Order”. He was paralysed from the neck down when he sang this and that’s the least of the reasons it will move you to tears. Wait till you hear Aretha at the end. I will get around to writing more about the great man. “Go ahead Mayfield” she says. And he does.

Breathless – Vanessa Williams
Civilian Ways – Rancid
Satellite Skin – Modest Mouse
Falling And Laughing – Orange Juice
OJ is even better than I remembered. Altogether: “I’m falling in love again because I want to take the pleasure with the painpainpainpainpain”.