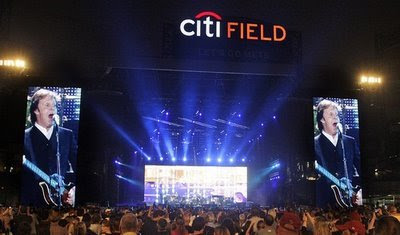 The warm up act Irish lads the Script are doing their best, even pointing out Paul McCartney’s dressing room somewhere high to the left of us but nobody is wearing it so they buckle down again and get back to work. The Script are out of their league in the cavernous Citifield but they are game and despite all the headaches you might expect with a lead singer who also plays keybs they come across like a young U2 (not U2 when they were young but how U2 would sound if they were young now). A clever cover of “Heroes” and their addictive hit “The Man Who Can’t Moved” are highlights.

A predictably long wait till 856pm is made tolerable by a collage of McCartney memorabilia running on screens and remixes of Macca songs, “Temprorary Secretary” is especially good and we are off with a one two punch of “Drive My Car” and “Jet,” Macca on bass and it reminds me of what a bizarrely melodic bassist he is -later on he would do another “Band On The Run” song and it is fueled entirely by a bass lick.

Indeed, he would end up performing four songs from “Band On The Run” which is good but lots from his more recent stuff like latest albums”Memory Almost Full” and “The Fireman’s Electric Argument” which is a lot less good. The third number is “Only Mama Knows” and it is lively enough but it isn’t a very good song and there is not much they can do with it. All the new stuff doesn’t work and even the mid-period maudlin Lennon tribute “Here Today” isn’t happening.

McCartney has a back-up band of professional hit men and even in the Chuck Berryish “Back In The USSR”, everything is perfect but unimportant: talented fellows all but there is zero chemistry on stage and this is even clearer during the second encore when Billy Joel comes on stage to return McCartney’s favor of playing at Joel’s last stand at Shea Stadium last year (McCartney is ten times the songwriter Joel is but Joel was vastly superior at Shea than McCartney is tonight) and suddenly there is more fireworks than just those going off during “Live At Let Die”.

Still McCartney is such an affable, charming guy to be around the audience is in Beatle heaven and he deserves the praise. He tells stories, funny ones about Hendrix needing Clapton to tune his guitar during a concert, he winds up the audience, makes em laugh, has em in his sidepocket. And that’s the next problem, there is simply zero edge to his performance: he is a living Aruba commercial all “Hail fellow, well met”. Nothing wrong but without a band of equals it is all way too innocuous and flat for a rock show (nothing from “Venus And Mars” by the way).

Well, not all. Nice to hear “Paperback Writer” and nicer still “Mrs. Vanderbilt” where he finds the great McCartney aphorism: “What’s the use of worrying? No use” and better still the great Beatle B-Side “I’m Down” and better better better still an acoustic “Yesterday” (till he blows it with back up tapes) . Best of all a powerful “Let Me Roll It” with Macca’s best guitar of the night.

But he spends a third of the set behind his piano and the set list itself is a bit iffy, when I last saw him in 2005 the set construction was stronger, he was coming off a better album and he had made a list of career trajectories of constance interest: “English Tea” next to “Lovely Linda” for instance, suggesting the pastoral elegance of his life next to his down on the farm lo fi first solo album. Tonight he is going fast fast slow slow new new old old and settling mostly on the huge hits. No “Coming Up” no “My Brave Face” .The surrealistic nightmare “A Day In The Life” segues into “Give Peace A Chance” and we could’ve used more of this. Still he knocks off the new songs an hour and a half in and builds to the encores he deserves and though “Hey Jude” is another Beatle song I can’t hear any more I do love “Helter Skelter” and it is a satisfying two and a half hour performance, his voice is fabulous though he can’t hit the high notes as swetly as he used to, his playing excellent and he looks good.

So absolutely lots to enjoy but Macca might want to rethink his live gameplan. I’m the bloke who has been busting on Conor Oberst all year for giving too much freedom to the Mystic Valley Band so i’m not certainly not suggesting McCartney gives these guys any rope, but why not team up with his peers for an album and a tour: A Clapton or a Voorman and a Winwood and Starr on drums? He is still ambitious as his recent collaboration with Youth proved.

McCartney is great and I see him whenever he is in town but he could be doing more and it was a pleasure to see him last night and it was a fun night. I guess that’ll have to do.

Set List:
Drive My Car
Jet
Only Mama Knows
Flaming Pie
Got To Get You Into My Life
Let Me Roll It
Highway
Long And Winding Road
My Love
Blackbird
Here Today
Dance Tonight
Calico Skies
Mrs Vanderbilt
Eleanor Rigby
Sing The Changes
Band On The Run
Back In The USSR
I’m Down
Something
I’ve Got A Feeling
Paperback Writer
A Day In The Life
Give Peace A Chance
Let It BeLive And Let Die
Hey Jude
Day Tripper
Lady MadonnaI
I Saw Her Standing There
Yesterday
Helter Skelter
Get Back
Sgt Peppers Lonely Hearts Club Band
The End