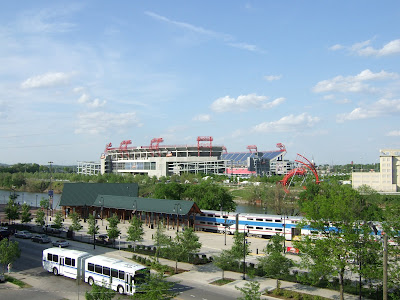 Our intrepret young reporter Marie Lynn went to Nashville and posted this review of the Country Music Festival 2009
As a born-and-bred Brooklyn girl, going to the CMA Country Music Festival was not my ideal way to kick of the summer. I reluctantly agreed to go and keep my sister company. I boarded a Greyhound Bus at New York’s Port Authority with a stomach ache and a head full of preconceived notions about country music and the south. Twenty-three hours later we stepped out of the Nashville bus station to find a warmer, more humid, deader city than the Big Apple. – YIKES! Little did I know that the days to follow would mark the most important development in my love of music since I was introduced to Conor Oberst.
The following morning the streets of downtown Nashville were alive! There were events and music happening everywhere. For four days, from the late morning to the early evening artists performed at Riverfront Park. Then each evening the LP Field stadium, home of the Titans, filled with tens of thousands of excited fans to see the night performances which are generally the hottest stars of the line-up. Each artist only plays a few songs and the next act is quickly brought on. A four day pass ranges in price from around $100-$300 (a phenomenal deal). The city was lovely. There seemed to be pretty view from about every location, it was clean and its citizens were perfect examples of the old cliché of ‘Southern Hospitality’.
During the day the musicians, especially the less popular ones, would hang around to have their picture taken and sign autographs. The wait could be as long as an hour for a more popular country star.
After the concerts my sister and I hit the bars with results as mixed as the strong, $4 drinks. However, if you get lucky and hit the right places you can have fun -the boys were cute and sweet but way too drunk.
Day 1: Brad Paisley, one my favorites, put on a fun and energetic show which seemed reflective of his passion for his work. Dierks Bentley’s performance felt a little more forced and unauthentic. Reba McEntire was in the middle of a strong set until she was interrupted with a rain delay. Two hours later Darius Rucker (from Hootie and the Blowfish) had everyone on their feet and excited to be there. Many fans felt disappointed that Rascal Flatts didn’t stick around after the rain delay.
Day 2: Jason Aldean and Rodney Atkins I liked didn’t love. Lady Antebellum and Little Big Town didn’t do much for me. Luke Bryan was fun and cute. Zac Brown Band were great (and one of the bands that I came home and looked up on itunes.) Their cover of “Devil Went Down to Georgia” was a good fit for them and they did a good job.
Day 3: Trace Atkin’s put on an energetic show, but his lyrics didn’t thrill me. Lee Ann Womack was ok. I tuned out the Judd’s. Josh Turner’s face strangely didn’t match his voice. Martina McBride is where it got good. She is the perfect example of the difference between a seasoned performer with both natural abilities and years practice and a younger wet behind the ears band like Lady Antebellum. Martina moved the crowd to tears, here she is singing “Lean On Me”: http://www.youtube.com/watch?v=cG5vaOn5Mfs This is lovely but note the big screens. I am used to small clubs like the Mercury Lounge and think big halls where you are stuck watching screens or tiny stick figures miles away are the opposite of the live music experience.

Day 4: Miranda Lambert could easily abandon her country feel and slide into a rock career. She tore up the stage, with amazing vocals and energy. Perhaps the highlight of her performance was “Gunpowder and Lead”. John Rich came out wearing a full length fur coat on a 20th June night (what was that about?). I appreciated his tribute to our veterans but it seemed a little self-serving in its emphasis on his grandfather. Finally I was very offput by the freakshow he brought to the stage with the midget he called country music’s smallest pimp (at 2ft 3). Taylor Swift was possibly the worst performer of all four days. She seemed to lose control of her vocals to the point that it was painful. Maybe I’m paranoid but at some points it seemed so bad they had her lip singing and a recording take over. What’s worse is that people were freaking out over seeing her. (There was a grown man there with a Taylor Swift tattoo!!). I don’t get what’s the big deal with her. Kenney Chesney had the crowd excited and moving. Although I found him to be easy on the eyes, neither his music nor his lyrics jumped out at me.

Country music is very different from the admittedly whiney and occasionally pretentious music I call my favorite. It was fun, easy and wonderfully American. Part of its value is in its inclusiveness and its ability to appeal to a wide range of people (both in and out of the States) whereas the music I love tends to be insular and age specific. Since returning home, though, I’ve realized that many of the performers I saw in Nashville sounded better live and the recorded versions of them are distinctly more produced which, I think, reduces the character, quality and authenticity of the music.

I urge lovers of popular music to visit Nashville, if not for the music festival, for the sight seeing and history.