Ian Mackaye and Integrity In Rock 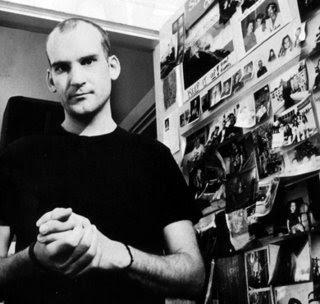 Here is a personal example. Saturday I went to see Jerry Rivera at Summerstage and twenty minutes into the set he is singing to some girl from the audience and I’m “Ok, that should do it” and I’m edging towards the exit but I couldn’t bring myself to leave because I knew I wanted to post a review. I also knew it would be a MIRACLE if anybody at all read the post but even so, just in case somebody did, I felt obliged to stay to the end so I could accurately write my opinion. That is my definition of integrity as it pertains to this blog: my writing may or may not be awful but whatever it may not be it is an informed opinion. I’ve been to the concerts, I’ve listened to the music, and this is what I think.

So integrity is not about good or evil, it is about doing what you think you should in a given situation.

Look at Ian Mackaye formerly from DC hardcore band Minor Threat. He formed Fugazi, a hardcore reggae band (you know Sublimey only less melodic). Fugazi recorded in a home studio, released their own music and distributed themselves at very inexpensive prices. In 2009 with the Internet making music distribution relatively easy Fugazi’s actions don’t have the ramifications it did then. It was, simply, unheard of.

More, Fugazi made all their concerts for all ages. In the world of night clubs hardcore bands tour this act of unity with their teenage audience is amazing. It lead directly to a hardcore movement obsessed with skateboarding and seriously anti-drugs and alcohol.

Punk came out in 1976 and was essentially done by 1978 with the Sex Pistols disbanding. Within those two years they were in the forefront of Rock Against Sexism and Rock Against Racism, not merely spokepeople for a generation they marched for gay rights and Union rights. Was this integrity? As a music punk UK was deeply influenced by reggae and, for the first time really, women were on an equal footing with men, but these were subjective political opinions. Who can not be anti-racism though? Actually, the Oi movement which was punk veering into hardcore and an ear bleedingly hard sound was affiliated with Oswald Moseley’s White shirts and other racist organizations. If punk had integrity, Oi had just as much integrity because integrity is neither good nor evil: it is in having the power of your own convictions; it is in doing what you believe in.

Strummer and the Clash were hoisted on the pole of integrity and hung out to dry. They wanted to keep true to their beliefs but, unlike Fugazi, wouldn’t give up on a larger audience by going it alone, or at least signing to a smaller label, rather than the majors. The cost was internal combustion -good guys, yeah. Integrity -not so much.

The flip side of the subject is a band like “Jam Today” -a reference to the menstrual cycle. “Jam Today” were lesbians who refused to play in front of a male audience. Tons of integrity but like Oi bands essentially assholes.

Bands show their integrity or lack of it in odd ways. I went to see Jay-Z at MSG once and the concert was running long so while on stage his management reached an agreement with MSG for Jay-Z to pay MSG’s employees overtime. Compare this to Guns ‘N’ Roses who started a riot in Miami by keeping the audience waiting three hours and then playing three songs before kicking in an amplifier and hurting themselves. The audience destroyed the place.

As an inveterate concert goer I find it insulting when a band doesn’t go on stage in a timely manner.

In the 90s Pearl Jam, somewhat presciently, refused to use Ticketmaster for their major tour behind “Vitology”. The result? They couldn’t play any major stadiums and the ticket scalpers raised their prices significantly.

The question of doing the right thing by a group is somewhat complicated in that the method of their integrity is tied into the manner of their business and nothing helps tremendously unless you are willing to step right out of the box. When David Bowie claimed to be bisexual it was a smart business move and an act of integrity. When Elton John did it wasn’t.

When Public Enemy hung a white man in effigy during their concerts, what was that? Preaching to the converted?

It goes back to a mix of individual definition and common sense. Unlike the moral coda attached to good and evil, integrity is amoral, just because you are doing something with no concern for its effect upon you does not mean you should be doing it. But still much more than good and evil, rock tends towards integrity. It tends to take the hits for what it believes in.