Back in the day I took my nephew Jeff McColl to the Warped Tour at Randall’s Islland. A great night and I was very impressed by two bands, one was pink poppers  the Vandals and the other was punk metallers Poison The Well.

Fast forward some eight years later and the Vandals are married with children and Poison The Well’s Derek Miller is half of the duo Sleigh Bells -the first break out band of this years CMJ after their gig at the Santos Party House. . Alexis Krauss sings and Miller plays guitar and between the two of them they make great dance music -all clanky guitar and drone dance vocals with an enormous back beat. There’s a handful of songs on their myspace and they are so uniformly great it’s surprising… pick hit? “Crown On The Ground”.

You can’t buy em yet that I can find but it won’t be long.

Here is their myspace: http://www.myspace.com/sleighbellsmusic 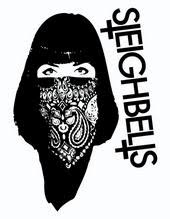