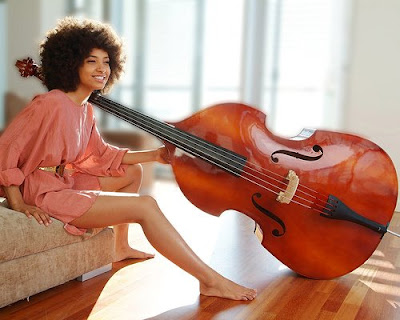 I have no idea what I am talking about but I don’t like this at all. On a sunny Sunday afternoon made for Central Park a multi-ethnic hodge podge of jazz lovers are having picnics, snuggling, playing with their kids and cheering on some of the dreariest jazz fusion imaginable.

Now here’s the hard part: nobody except me thinks so because they like it and I don’t. I’m the guy who walked out on Cassandra Wilson opening for Ray Charles: I completely distrust my opinion and would love if somebody could tell me where I’m going wrong.

But before I reach the godawful Esperanza Spalding I have to sit through the godawful Jonathan Batiste. batiste starts on the melodica and he plays it well, then he has various kinda of saxes and fklutes and stuff join him on piano, then he does the song least likely “St. James Infirmary” and then he segues from Curtis Mayfield to Michael Jackson. we used to have a name for this: smooth jazz. I don’t like it, everybody else does.

Then on to Esperanza who has a big afro and a bigger bass and a small voice and who talk songs some wordy, pleasant enough in the summer sun songs and brings a little light to the gloom. but not to my gloom.

What it amounts to is: jazz-fusion is to jazz what hair metal is to hard rock. If you like it fine, I just find it like watching the world spin round: there is nothing to see. here she is: http://www.youtube.com/watch?v=ZNw46j0nNOs

Since Conor REFUSED to add a concert I weakened and me and my pal John Russo are off to Toad’s Place friday to see him in person.

Weird “Al”: There’s a difference between satire and parody. Weird “Al” isn’t a satirist, he doesn’t really have a point of view, he is a parodist: the relationship between the high drama of the Doors and the banality of posting on craig’s list is where the joke lies. That and just how close Yankovic gets to the original. It funs at pop by showing it up as the simple form of music it is: even the geeky, four eyed, Al can do it. “Craigslist” is a real good song and Weird “Al” is a true original.