I love Jemina Pearl Because She Does Good Sculpture 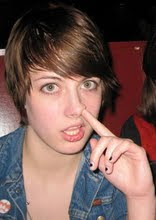 In a blistering half hour set at Irving Plaza in May 2008 punk rock band Be Your Own Pets blew headliners She Wants Revenge right off stage with a thrilling all attack all the time fast faster roar of all the songs you know and love. Lead by college kids sex symbol  Jemina Pearl, Be Your Own Pet were a mix of the Cramps (RIP Lux Interior) and the Rezillos at the speed of the Ramones. All that was missing was a cover of  “(My Baby Does) Good Sculpture” .


Instead we got “Zombie Graveyard Party” -a perfect American pop punk glom off their second and final album Get Awkward  and the awkward and angular guitar intro on “Ouch!”. The subject matter, all blood and guts, was so much more fun than the coming up at the same time Paramore’s broken hearts. You can’t imagine Hayley Williams singing “Everybody here parties, everybody  here has sex on their mind” or starting a song “They’re on the streets with their eyes of hunger, it’s a disease it’s a death to one another”. Be Your Own Pet were an apocalyptic death trap lead by a great guitarist Jonas Stein. And a great lead singer in Jemina who has everything you might want from a the leader of a punk rock in the States (she is too pretty for English punk where Poly Styrine and Siouxie Sue set the tone).


I thought they wer lots of fun and wondered what would happen to Jemina Pearl after the break up. A quick read of her blog “Puke Til You Punk” featuring a profile pic of her picking her nose made me think  she’d be fine and sure, singing with Iggy Pop aint gonna hurt your cred on the streets (and any way, what do I care?). But what I’ve heard of Break It Up is a little average. Jemina’s voice  is now really quite sweet  unlike the from a snarl to a roar it used to be and she would have spat at a lyric like “I hate people but I like you”. The backing band is doing nothing to help her but the songs are still pretty good.. “Ecstatic Appeal” is a really good song, pretty and ringing, and her voices is a pleasure though she doesn’t push it.

Break It Up is a pop move but a brave move -it takes guts to drop something you’ve worked for for years and try something else and it is good manners to break up your band for a sound dissimlar to theirs. I wish Jemina hadn’t done it -I think she shoulda just put Be Your Own Pet on hiatus for awhile and returned when she was ready -a Gwen Stefani type move. As Juliana Hatfield learnt the hard way, integrity will only take you so far and we live in a consumer world where artistic value and monetery value are integrated. I don’t think this album will do it for her but it is easy to imagine a perfect Be You Own Pet album that mixes the two sounds. Till then definitely buy “Ecstatic Appeal”. Oh, and the Rezillos “Good Sculture” is worth a buck.