First Look At Monsters Of Folk: Bright Eyes is the Monsters, James and Ward the folks 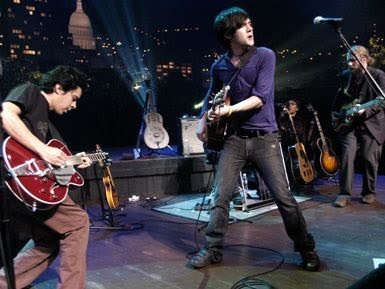 Monsters Of Folk isn’t released till Tuesday and I am no longer in the biz so I’ve been streaming the new album and nobody who follows this blog will be shocked to hear that Conor Oberst is as brilliant as I thought he would be. “Say Please,” we know but “Man Of Truth” is the only real folk song here and a Bright Eyes masterpiece with a lyric worthy of the big d (whenever anybody mentions folk and sisters in the same breath I think of “Ballad In Plain D”) and

“Ahead Of The Curve” sounds like he wandered off the Tourist Trap EP if not Collection Of Songs. Doubtlessly, this sounds like Bright Eyes whereas “Cape Canaverel” because of the presense of the great Mike Mogis -BE producer and multi instrumentalist. All of the Oberst songs are world beaters and the best by far.
On the other hand, Yim Yames (Y?? dont ask me) doesn’t reach the nadir of the dire “Dear God” again and while NOTHING he gives MOF is as good as his stuff on Evil Urges, at least “Losin’ Yo Head” is pretty monstrous second tier My Morning Jacket (I am a latecome to MMJ: a coupla years ago I went to a Dylan tribute concert at the Beacon for Todd Hayne’s failed but still fabulous “I’m Not There” where MMJ played a stunning “Tonight I’ll Be Staying Here With You” and made me an instant fan) and though Yames should be ashamed at beating M. Ward for the worst song on the album, at least M. Ward beats him for the quantity of crap on the album. The powers that be have been comparing MOF to the Travelling Wilburies. Lessee: Conor is Dylan, Yames is Harrison, Mogis is Jeff Lynn, that makes M. Ward either Tom Petty or Roy Orbinson. Now we’ve all stopped laughing ourselves sick I’ll leave MOF till after the concert this November.