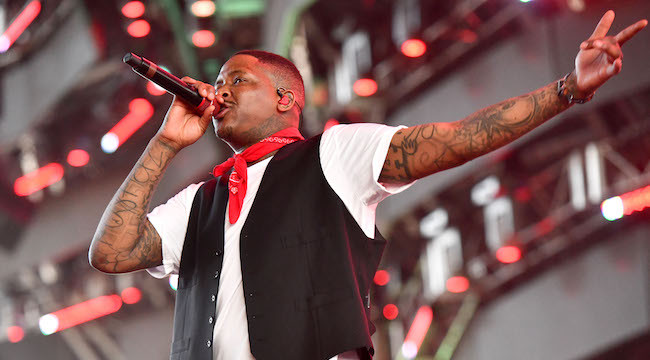 The countdown to the release of 4REAL 4REAL is on as YG stole the show at this past weekend’s Rolling Loud Festival in Miami.  He is confirmed to perform at the BETX Experience on Friday June 21st, alongside Meek Mill, as part of the 19th annual BET Awards at L.A. Live, the weekend of June 20-24th. And he took the outdoor stage at Jimmy Kimmel Live! last week for a performance of “Go Loko” with Tyga and Jon Z. Watch their live performance HERE (which has earned over 1 million views).

YG recently made his performance debut, as second bill head­liner, over both weekends of ‘Boachella,’ with surprise guests 2 Chainz, Big Sean, A$AP Rocky, Ty Dolla $ign and Tyga, hailed by the Los Angeles Times as “…One of the fest’s finest rap sets to date.”

The arrival of 4REAL 4REAL builds on the extraordinary year that YG experienced in 2018, centering on the August release of his third album, Stay Dangerous, Top 5 follow-up to his critically acclaimed Still Brazy (2016), hailed by the New York Times as  “an artisanal, proletarian Los Angeles gangster rap record.”  Stay Dangerous was preceded by its first official single release in June, the double-platinum #1 smash “Big Bank” featur­ing Nicki Minaj, 2 Chainz and Big Sean, one of the biggest singles successes of YG’s entire career.