Will Concert Ticket Prices Continue To Increase When The Pandemic Is Over? 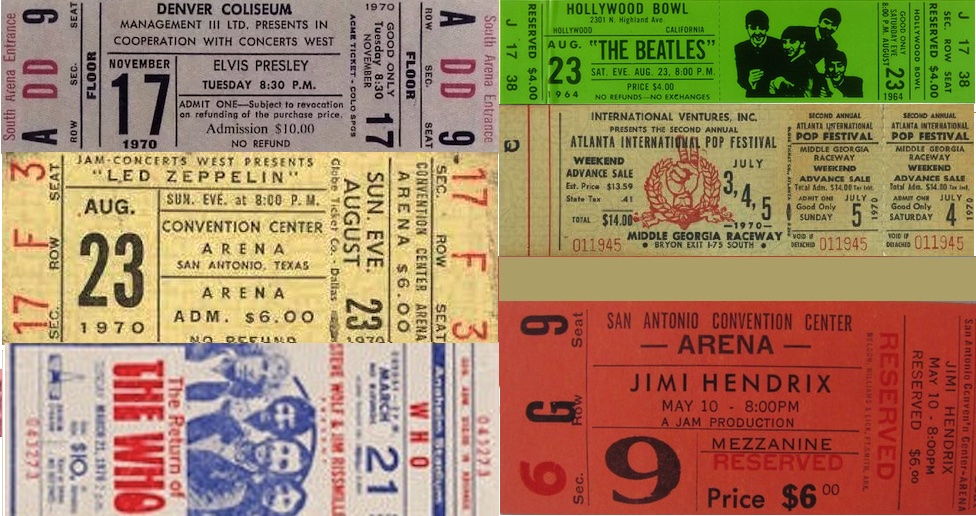 Concert ticket prices in the ’70s

I sometimes wonder about the concert ticket prices in the late ‘60s and early ‘70s? It’s easy to find out, old tickets can be found on the internet, and some of them are now sold to collectors for outrageous amounts of money. But concerts looked like a bargain at the time. You could buy tickets for just a few dollars, $10 at the most, like this $10 Elvis Presley concert in Denver, or this $6 Led Zeppelin show in San Antonio, or this $10 Who concert in Anaheim, or this $4 Hollywood Bowl ticket for the Beatles… Pretty amazing, right? Even festivals were cheap, the 3-day Atlanta International Pop Festival featuring Jimi Hendrix was only $14.

However $10 did certainly not have the same value in 1970 as today for the average American household. According to this inflation tool, $10 in 1970 would represent $69 in 2021, which means that going to a concert was a certain expense but still much cheaper than today…

With the Stones, the Beatles, Presley, The Who, we are talking about major artists here, and what kind of seat can you buy for $69 today for a big act? A nosebleed in an arena at best. The average price is around $100-150, and we know that floor or pit tickets can reach crazy amounts. It’s not rare to see $500, $600, or even more for such admissions. As for festivals, one-day GA is usually $150, a 3-day GA is around $350 and I am not talking about the VIP tickets and numerous packages.

Prices have steadily increased since the ‘90s but it has never been more difficult to buy tickets for hot acts. At least it was the case for plenty of festivals and major shows before the pandemic, and since Las Vegas’ festival Life is Beautiful sold out in a few minutes, it could still be the same post-pandemic. But will concert ticket prices continue to increase?

With Ticketmaster still in charge of most of the market, following the merger of Live Nation and the ticket giant, with the numerous fees they keep adding when you hit the check out button, there is little chance this will change any time soon, on the contrary. Concert ticket prices have been rising faster than inflation for a while, mostly because of the demand, and people have never been so eager to go see a show right now. With the void created by the pandemic, it would be logical to predict an increase in the demand, which could also increase the prices even further.

However, 2020 was a major halt in the concert industry and in everybody’s life. People’s habits have changed, and the pandemic is not completely over. So there is another possibility when the concerts start again: plenty of people could still be reluctant to attend crowded events, and this could lead to undersold events; in this case, we could see the opposite effect and see prices drop.

It could be the silver lining of this pandemic, lower concert prices for a while? We can only dream, but we will never go back to the ‘70s.