Which Songs Could Define The ’90s? A Study Attempts To Answer The Question 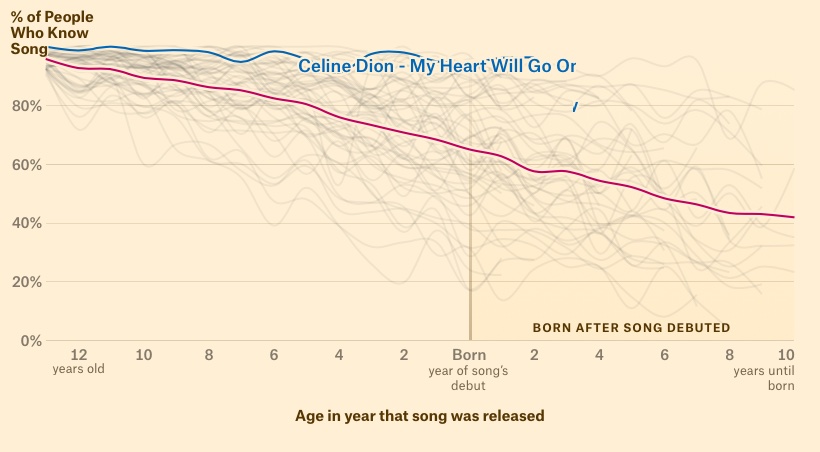 Which Songs Could Define The ’90s?

Hits don’t last but some of them actually pass the test of time. I sometimes wonder: which popular song of today will still be recognized in 20 years by someone born in 2021? Only time will tell. A project by Matt Daniels and Llia Bliderman and published by ‘The Pudding’ tried to answer a similar question. They investigated which hit songs from the ‘90s are still recognized today, which songs could define the ’90s. They collected data via a music quiz – you can actually take it multiple times here, it’s a lot of fun as the songs are different every time you try it – asking people if they could recognize thousands of songs from different decades. They concentrated their study on millennials and gen Z and songs from the ‘90s, trying to find out which songs and artists could legitimately represent this music period.

The authors then published a chart of all the songs recognized by more than 90% of people who were 13 to 15 years old when the song debuted, adding a line representing the popular average. Some hits didn’t do very well: for example, Billy Joel’s ‘The River of Dream,’ Will Smith’s ‘Wild Wild West,’ Shania Twain’s ‘You’re Still the One,’ Meat Loaf’s ‘I’d Do Anything for Love,’ Mr. Big’s ‘To Be with You,’ Michael Bolton’s ‘How I am Supposed to Live Without You,’ and Jennifer Lopez’s If You Had my Love’ are found well below the average, which means you will probably not find them on a Tik Tok video. On the other hand, Céline Dion’s ‘My Heart Will Go On,’ Britney Spears’s ‘Baby One More Time,’ Cher’s ‘Believe,’ Whitney Houston’s ‘I Will Always Love You,’ Michael Jackson’s ‘Black or White,’ R.E.M.’s ‘Losing My Religion,’ and House of Pain’s ‘Jump Around’ are way above average. Thinking back to the ‘90s, I would have never thought that Céline would do that much better than Meat Loaf, but you can never underestimate the Titanic effect of course. Each song has its own story and there are many other songs included in the graph but a constant trend can be noticed: whatever its popularity, the knowledge of a song erodes with time.