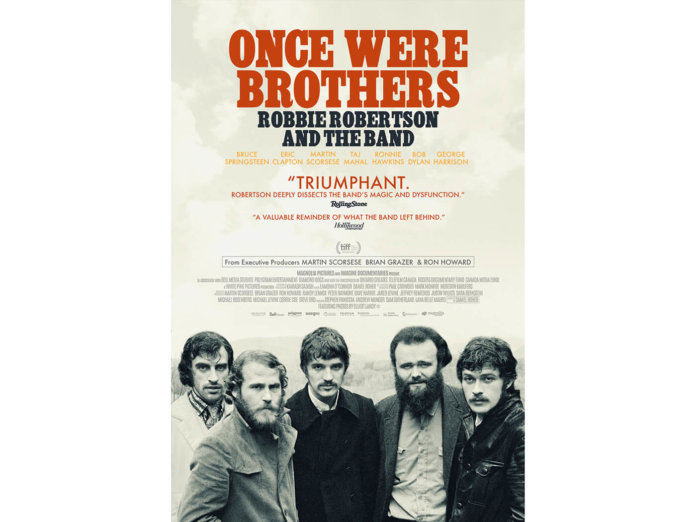 Robbie Robertson: “Once Were Brothers” – Robbie tells the tall tales of The Band, and the old footage is phenomenal. But at the heart of the matter, and disposed of at the end, is  the nuclear war between the closest of the brothers, Levon Helm and Robbie Robertson, and while it is foreshadowed, it  is worked on very late. After the Band broke up, Levon went bankrupt and claimed that the other members of the band deserved writing credits for the songs Robbie wrote. Perhaps, but the time to mention it would have been while they were being written. Finally, Rick Danko and Garth Hudson are given remarkably short shrift… it is streaming on Hulu –  Grade: B

Billboard Change The Rules (Again): Billboard will not allow sales of albums bundled with merchandize and concert tickets to be included in sales. So whatever small leeway CDs and vinyl have for that first week that keeps on falling off a cliff because sales is only once but streaming keeps on going has disappeared.

Hitchcock/Truffaut – the classic book detailing the two great director discussing Hitch’s movies over 300 hours is the only thing that I have read that has taught me anything about a subject I know exceptionally little about. The difference between suspense and surprise is an axiom I hold with me to this day. Surprise is two people talking for five minutes and a bomb explodes. Suspense, is if the same thing occurs only the audience is aware there is a bomb under the bed. Grade: A+

John Lewis: dead at the age of eighty, the civil rights era activist, and senator since 1986, will be missed.

Ruth Ginsberg: while heartbreaking on many levels, pretty soon her eventual retirement will mean a little less to liberals. Here’s why: she is so fragile that the chances of her being on the Supreme Court in 2024 are slim, so the next President will make the choice. If it is Boiden that’s one thing, Trump would be another, but since it hinges on the next General Election and the result will be inevitable.

J. Cole: Back with two new songs today, after getting slapped about by Noname, he turns the page… I only saw him once on stage and he was great and that is always a litmus test.

Surrender To the Rhythm: London Pub Rock Scene of the Seventies – I just invested thirty bucks on the box set of a recherchez of gone but not forgotten pub rockers, the title comes from an old Brisley Schwartz song…  A month or so before it arrives but apparently I’m not going anywhere…

Summer Wind: In my review of Sinatra’s Strangers In The Night the other day (here)

The Difference Between Q and Uncut?: Uncut has IPC behind it. Indies are always more fragile.

The Last Dance: Is streaming on Netflix, a crossover pop masterpiece with Michael Jackson as John Lennon and Scottie Pippin as Paul McCartney.

The Kissing Booth 2: is on Netflix on Friday though I have no idea how they think they can

Oxycontin: The problem is the name of the deadly opioid. Take this and you can breath while being diapered in cotton and cradled in the arms of a painless joy…

President Ye: “I almost killed my daughter! I almost killed my daughter!” – That’s Kanye discussing abortion. He isn’t against abortion but he wants to give women who bear children a million bucks… as he launched his campaign for President in Charleston, North Carolina. Now that he has the women of childbearing age vote sewn up… “They’re going to run this, they’re going to tell you that I’m crazy. Well,  the world’s crazy!”

MLB: returns today. Unfortunately,  I, like 30% of the country, cut the cord and I can’t get Yes Network,  who, if they had an ounce of sense, would make their own streaming service.

Liverpool; congrats to the Champions Of England, one of the greatest cups available.

Trump And Coronavirus: The problem isn’t good and evil, at least not only, it is a person congenitally incapable of compassion and empathy not fit for the task of leading a health crises. He simply doesn’t see humans the same way normal people to. They become ones and zeros and when the sick cease to be human, their importance stops meaning anything. And when that happens, you have someone who can’t feel other people incapable of caring enough to save them. It is a tragedy, because for one thing just about any President since FDR would have been able to deal with it, we just got the wrong one. Also, Trump will be considered a great American Villian: think McCarthy times 100, but if he had handled the pandemic with an ounce of humanity he would have changed the trajectory of his Presidency, he would have saved the economy, and he would have assured himself four more years. In other words, it is a tragedy of epic proportions and his greatest mistake.

The Pop Smoke Deluxe version of Shoot For The Stars Aim For The Moon: Is 100 minutes of patchwork, it isn’t as good as Juice WRLD because it isn’t quite Pop Smoke. Unlike, say, Jimi Hendrix’s posthumous career, he is both a presence but also part of a greater tapestry. I guess Fitty had no choice.

Quaranteen’d: Great playlist by a teen I’ve never heard of but has really quite exquisite taste in music, all bedsitland sad songs all the times with the best pun I’ve heard as its title: