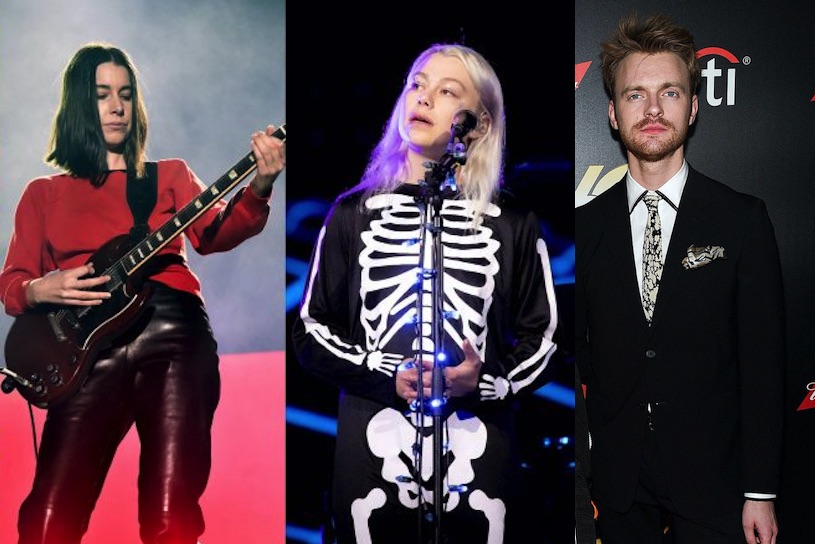 One of the Haim sisters, Phoebe Bridgers, and Finneas

Before the pandemic, I used to see plenty of shows every week and I used to discover plenty of talented local musicians. Despite some obvious talent for music, whether it was an ability to write interesting melodies, some unusual dexterity for an instrument, or simply a great voice, most of them never made it and never will. Most of them will stay local and will never blow up to reach some national or international fame. It’s the sad reality of this music business, Los Angeles is a magnet for wannabe musicians, many are excellent but very few will achieve some kind of sustainable success. How many will reach Grammys-level success? Only a few, I presume, very few. So, what are the chances that several kids who attended the same school in Los Angeles have managed to achieve Grammy-notoriety at the same time? Statistically, the chances are very slim I would say. However, this is nevertheless the case.

The Haim sisters and Phoebe Bridgers attended the same school (here is another confirmation), and it has to be the school mentioned in this Variety article about Phoebe Bridgers: Sequoyah School in Pasadena. The ‘kinda progressive, hippie elementary and junior high school’ was attended by plenty of famous people’s kids. The article shows a picture of Phoebe with her school band, and her bandmates were Ben Harper’s son CJ, Otis King, the son of Jon King, producer of Beastie Boys, Beck, the Dust Brothers, and Cormac Roth, Tim Roth’s son. This school is obviously one of these elite private schools, attended by plenty of celebrities’ progenies, and the tuition fees are not exactly cheap.

If you watched the Grammys, Haim performed, Phoebe Bridgers attended the ceremony, while being nominated several times. Billie Eilish and her brother Finneas were also nominated, they performed, and won, but again what are the chances that Finneas and Phoebe knew each other, back in high school?

‘Savior complex from Punisher, Funeral from SITA, Georgia from when we played a battle of the bands together in high school,’ Finneas tweeted when asked about his favorite Phoebe Bridgers song. Did they also attend the same school? Wasn’t he homeschooled? At least that was the story I had heard. In any case, there is no doubt, teen Phoebe and Finneas knew each other and competed against each other during a battle of the bands! They didn’t lose contact, Billie Eilish’s dad is even seen wearing a Phoebe Bridgers shirt in this new Billie Eilish documentary.

The Haim sisters, Finneas and Phoebe Bridgers either attended the same school frequented by music celebrities’ kids or knew each other when they were teenagers, and they are now all competing for Grammys. It cannot be a coincidence. I am not saying they are not talented, they obviously are, but, again, how many talented people live in Los Angeles? How many will never make it just because they never had the chance to attend a hip little school with plenty of opportunities, because they never had the chance to make important music connections? When it comes to success, luck and breaks are often more important than just skills.