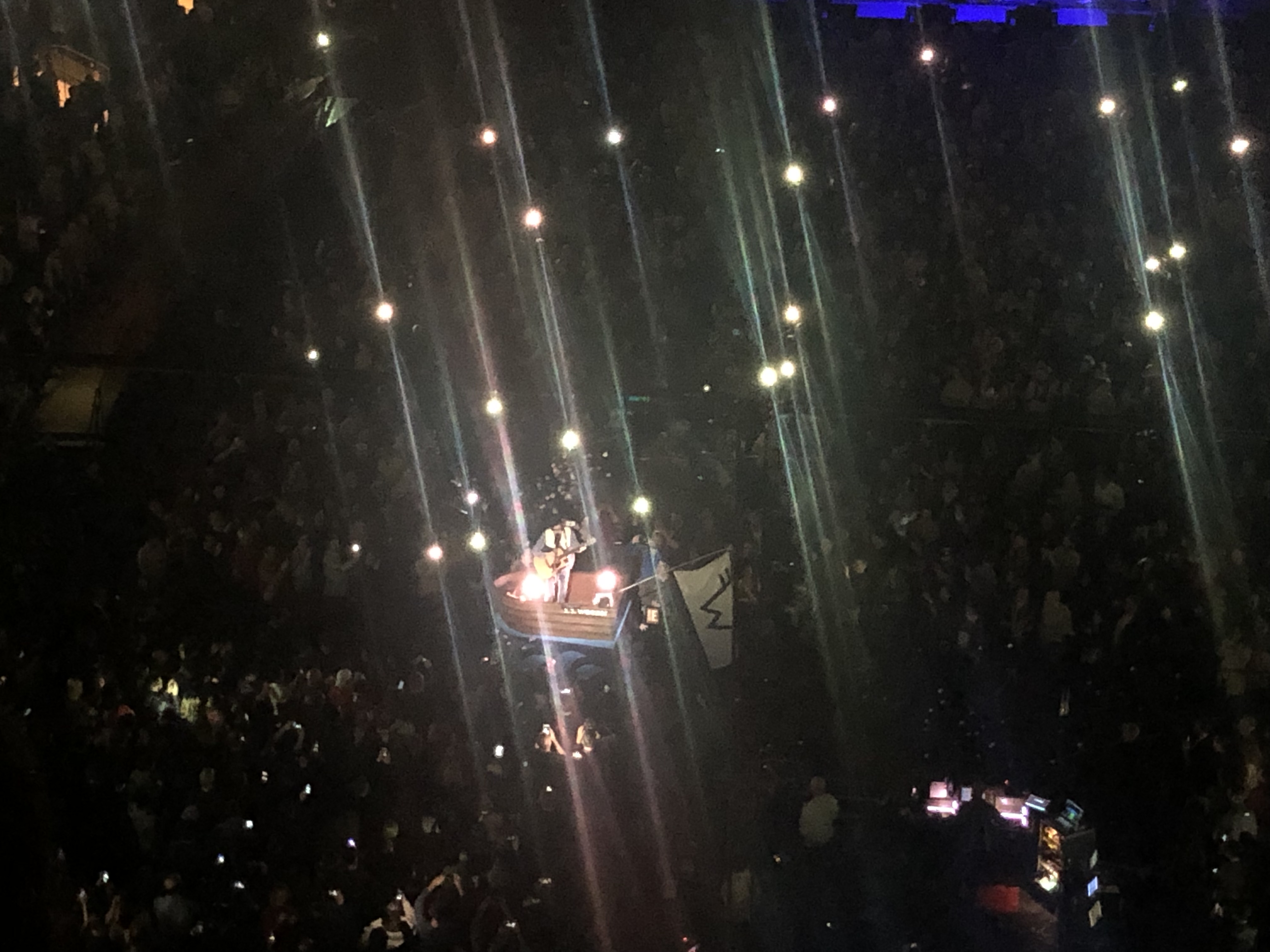 Ah yes, stupid white boys at play. What more can 16K odd 30 year old, second jobs, saving for marriage, going nowhere in a slow mo fall to oblivion on social media, saving for that trip to the Bahamas, instagramming their dinner, wondering when pop music became unlistenable, wondering why the top of the food chain feel like the bottom of the food chain, do but play with Rivers Cuomo. Rivers Cuomo with his horn rimmed glasses and Toto covers is them, or at least lets them think that the bare residual of the middle class of the USA is mirrored in these sad, happy, skillful, tuneful and intensely mediocre songs? Rivers, the ultimately purveyor of anthems for people with absolutely nothing worth singing about. And that includes, me, of course, I am usually quite reticent at concerts, but with the bad influence of Tomas Doncker -who is, himself, playing around town next week, and got his white boy on to an astonishing degree, I found myself screaming to Weezer’s version of Jay Z’s “Can’t Knock The Hustle” (bizarrely ripped apart in the New York Times last week)…  Yes, it was a moment, indeed. And if I was closer in age and instincts to the audience, the line up Tuesday night would have been impressive: Basement (UK wannabes), TV On The Radio (last year’s model), Pixies (thank you, Kurt Cobain) and Weezer (the consummate professionals), all under the guise of post-democracy, Mid-West values on the coast of Utopia.

We missed Basement, though rock nyc writer Jacob Fishman likes em,  walked into and out of TV On The Radio, the Brooklyn bi-racial turn of the century art rockers who singularly failed to follow up 2008’s Dear Science, and settled into Pixies, Boston’s Black Francis’  terrible post-punk alt rockers from the 80s, resurrected by Nirvana, and holstered on an unsuspecting public. Both long, brief, and boring, Pixies swirled through their arty constructed and misshapen rock songs and Tomas, who knows Black Francis personally, adored them and I wanted to be anywhere else, even a Weezer concert.

Weezer, and by Weezer I mean Rivers Cuomo, know how to remain popular despite failing to release a decent album since  2002: they come across as nerdy college kids (Rivers returned to Harvard after the release of his masterpiece, Pinkerton) and they are even stranger than that. Rivers was raised in an Ashram in Connecticut (isn’t he a Jehovah’s witness now?) till he left to LA at the age of eighteen and never much turned back. The first time I saw Weezer was in December 1996 at Roseland where their pop rock became hard as fuck rock and I nearly got killed in a moshpit of epic proportions, it wasn’t what I signed up for. Ever since then I’ve been a little careful when I’ve seen em,  though Tuesday night there was no fear because I was miles and miles away. They came out swinging, and like Pixies and TVOTR, barely spoke to the audience as they leaned very heavily on the hits. Very memorably, they opened by performing a Barber Stop Quartet version of “Buddy Holly” and three songs later a full band take on the same song. The change up was typical of a mindset where Rivers gently pushed expectations, a take on Toto’s terrible “Africa” featured backing tapes was if not a surprise (the song was a huge hit), the arrangement was far more bloody minded than expected. On the other hand, Rivers got on a platform and traversed the stadium for an acoustic  “Island In The Sun” and an acoustic version of TLC’s “No Scrubs” (off Weezer’s Teal). It was a great moment in that rarest of things, a set with only great moments.

1- They lack consistency, they can go through years releasing shitty songs

2 – They are a blur, their ideas, positions, who they are on and what they are doing is the loosest of concept bands, the concept is that there is no concepts, there is just Rivers facility with a hook, with the sort of line that has you singing without reason.

None of this adds up to more than Rivers being Rivers, whoever that is, with prosaic lyrics and a way of making something that is nothing feel like something. With a tight little band behind him, Rivers gives way into the rock structure of life, he is part of a gang who shoots straight but who don’t aim for anything specifically. His sense of story is rap like, he writes about himself and about love, some California sun tracks, and some life on the road: they are very insulated songs that are performed in a unifying manner. Rivers doesn’t dance, doesn’t do much, doesn’t talk, he just plays guitar and sings his songs about small losses, its smallness matches our smallness easily. From his four eyes visage to his strange, romantic frisson he is part of an audience that seems left behind and while the presentation is mainstream rockism, Rivers is more than that, he is a last man standing post-grunge superstar who is such a  stupid human trick, such a part of a lost tribe of the USA, his beaten down vision, he becomes us and it is sad but sharing thing to see. Of all the things you can imagine about Rivers the most telling is his naming an album after the character Hugo “Hurley” Reyes from the television show Lost.

Tuesday night, Weezer kept to the hits and performed them with solid enthusiasm to a solidly enthusiastic audience, all the hits, even the semi-ones like “Pork And Beans” and “Beverly Hills,” were a pleasure. It was a very good concert, catchy songs to sing on the way to the middle class abattoir.