“We Will Rock You – The Musical By Queen And Ben Elton” At The Hulu Theatre, Friday, November 15th, 2019, Reviewed 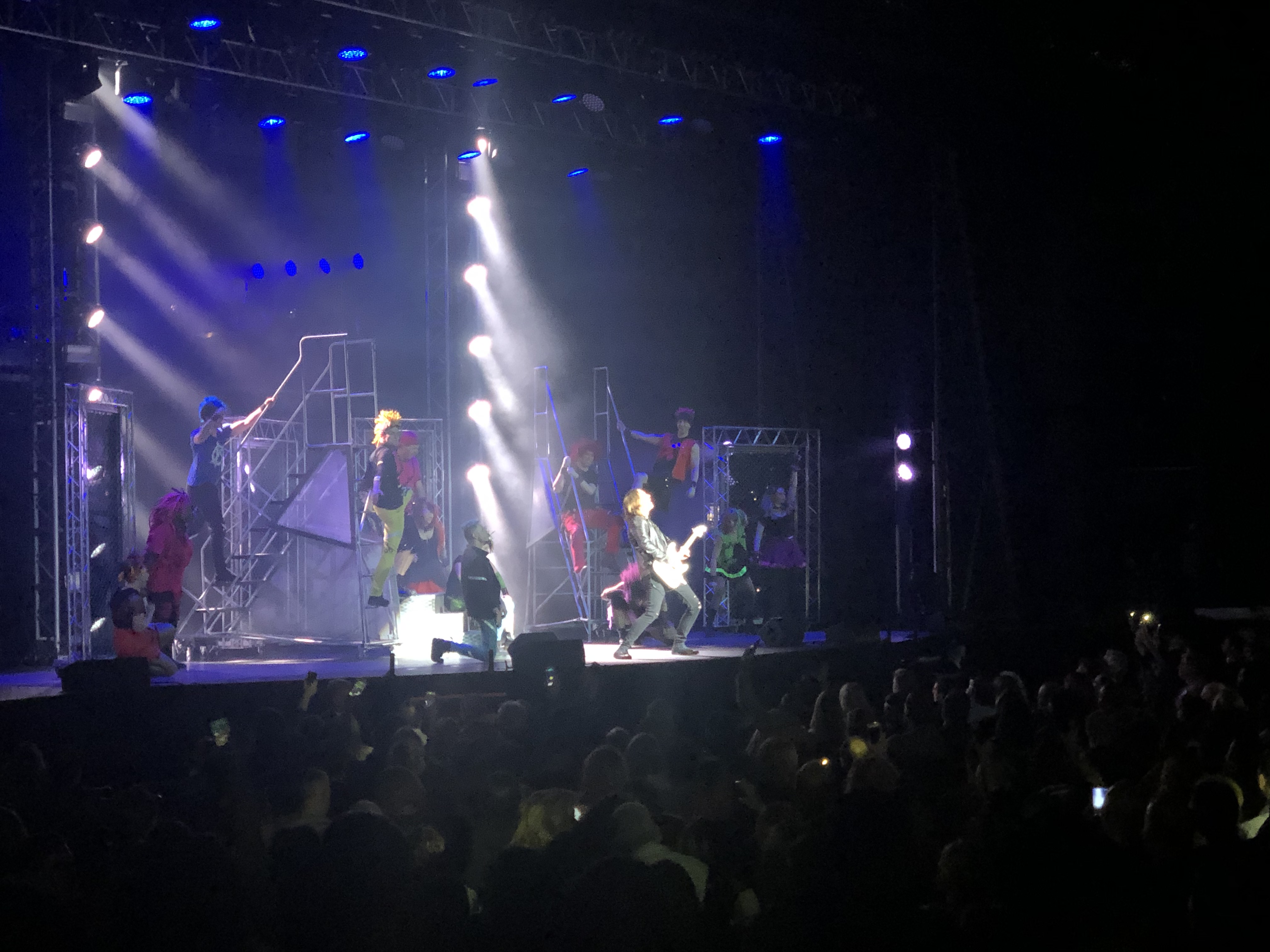 Ben Elton was a chief architect of one of the great Britcoms, “Blackadder,” so he clearly has the wits and the skillset to write the book of a musical featuring the music of Queen. He saves himself from the unmitigated disaster that was the travelling companies “Paradise By The Dashboard” last summer at City Center, in the surreally dated futuristic show, through relentless puns and wisecracks. Just about. In a post-apocalyptic former Earth (now IPlanet), music is regulated by the State and rock and roll is not simply banished but dead and buried even the holy grail electric guitar is a myth. Meanwhile,  an outcast gang known as the Bohemians try keeping the spirit alive through interpretations of ancient rock holy scrolls, while they wait for a savior. That savior would be Galileo (Trevor Coll) and his “babe”  Scaramouche (Keri Kelly). And this would be their story.

If it had been better, it might have had some of the thought process behind “Mr, Burns, A Post-Electric Play” (here) by Anna Washburn, which by the end, in the far future, has changed the “Cape Feare” episode of The Simpsons into a holy write and ritual, as well as Tom Stoppard’s “Arcadia” about attempting to interpret the past. That’s what informs “We Will Rock You” and it is the reason why the bland butchering of the rock and roll dream isn’t much worse. The rock band are lame pretenders, the singer-actors are Broadway bound, and, admittedly, I don’t much like Queen, but what I do like is performed efficiently. It  is a summer stock production, a wandering theatrical event, that can’t even be bothered to remove the dated Britney Spears jokes. Until the end, the audience was resolutely unconvinced by this  seventeen year old musical, now, more than ever, acting its age; unless you think one character being named “Buddy Holly And The Crickets” is funny.

At war with the Bohemians is Globalsoft (another dated and silly reference), who own, well, everything,  lead by Krystle Chance as Killer Queen and her lackey Kyle Gruninger as Khashoggi. Galileo and Scaramouche are sent to rehab and escape, join the Bohemians, but Khashoggi is close behind: IT WAS A TRICK. And  all ends up at Graceland with a close circuit performance of “We Are The Champions”. The actual ending, a full cast rave on  of “Bohemian Rhapsody, with the actors during the audience, is the shows best moment.

Queen were never a great rock band, though you might consider them a great glam rock band. “We Are The Champions” and “We Will Rock you” are simplistic yet stirring anthems, which the show doesn’t quite pull off, “Another One Bites The Dust” is a crossover disco masterwork, “Crazy Little Thing Called Love” a first rate Presley pastiche, “Somebody To Love” the 1976 follow up to the 1975 “Bohemian Rhapsody,” finds a difference direction for rock opera. Otherwise, meh. Still something of the spirit of rock gleams brightly because the youthful, and game, actors, especially the Candidaish Galileo, at least, remember what it all used to mean.