“One of poppiest rock songs on the record… that seems more saccharine until you really listen to ironic lyrics.”
– Brooklyn Vegan

“But while the group is just breaking out, their new single ‘Flowerhead’ indicates that their larger-than-life sound could quickly carry them to enormous heights.”
– The 405

“The female/male vocal chemistry and the vibrant guitars that accompany it are in the vein of groups like The Pastels, with an added mathy element. Ever the hard-working group, UV Rays are already working on a second EP, and if it is anything like the first, we will be glad to premiere it too.”
– The Deli

Brooklyn-based band UV Rays share the video for “Existential Dread,” a track off their previously released EP, Try and Begin. The Deli  exclusively premiered the video earlier this week, praising, “The track is from the band’s recently released debut EP Try and Begin and features beautifully intertwined electric guitars parts that play to the rhythm of a poised drum beat, and accent borderline jazzy pop choruses. The video is filled with extreme wide shots that show the band members playing their instruments, seemingly miniature to the huge backgrounds. The video’s simplicity is eye-catching and suits the track’s avant-pop vibe.” Their debut EP, Try and Begin, is out now. UV Rays is currently gearing up for the release of EP2, out this summer, and will be announcing local shows supporting the record soon.

On their debut EP Try and Begin, Brooklyn’s UV Rays are a band rejuvenated. While guitarist Adrien DeFontaine once served as the band’s principal songwriter, here he has invited his three bandmates to tackle lead vocals and songwriting duties as well. As a result, UV Rays have opened a floodgate of new perspectives and influences, embracing richly melodic pop music alongside their steadfast explorations of intricate, meter-shifting rock. “I wanted the songwriting to be a more democratic experience,” DeFontaine explains. “Early on, what people reacted to was seeing the four of us playing off each other live. That chemistry, and making something together that we couldn’t possibly do on our own, is what’s most exciting to me.” Try and Begin delivers big hooks alongside equally ambitious arrangements; it is as engaging as it is full of surprises.

Try and Begin is a drastic departure from UV Rays’ previous singles, both in style and intention. DeFontaine has long channeled the soaring vocals and complex instrumentation of contemporary Japanese rock bands like Tricot and The Cabs. But now those influences are tempered by, say, drummer Erica Warner’s love of Katy Perry’s stadium-sized melodies, or bassist Tim Marchetta-Wood’s adoration for the quirky arrangements of Deerhoof and Mitski. “It all filters into what we’re writing,” Marchetta-Wood points out.

Throughout the EP, these seemingly disparate sounds blend together effortlessly. On the celebratory lead single “Flowerhead,” for instance, Warner sings a huge pop chorus about being “comfortable enough with someone that you can be 100% your weirdest self in front of them,” but bookends it between restrained, elegantly winding verses and visceral blasts of staccato guitar and drums. Later, “Existential Dread,” sung by Marchetta-Wood, features intertwined guitar riffs in the vein of Television, courtesy of DeFontaine and guitarist Danny Sullivan; “Boys,” written by the full band, is a euphoric blast of unabashed pop-rock that works as a poignant foil for Warner’s biting commentary.

Nowhere is the band’s skill more apparent than in their ability to make abrupt jumps into atypical meters sound approachable and downright fun. Yet these twists and turns – like on the pogo-inducing adrenaline rush of “Man Enough” – never come at the expense of accessibility; DeFontaine likens the alternative to a Rube Goldberg machine or Wile E. Coyote’s absurd, unnecessary schemes. From these deft arrangements to unexpected gushes of sweet melody, UV Rays’ Try and Begin is overflowing with the fruits of true collaboration. Now, most importantly, as DeFontaine says, “everyone feels like this band is their own.” – Max Savage Levenson 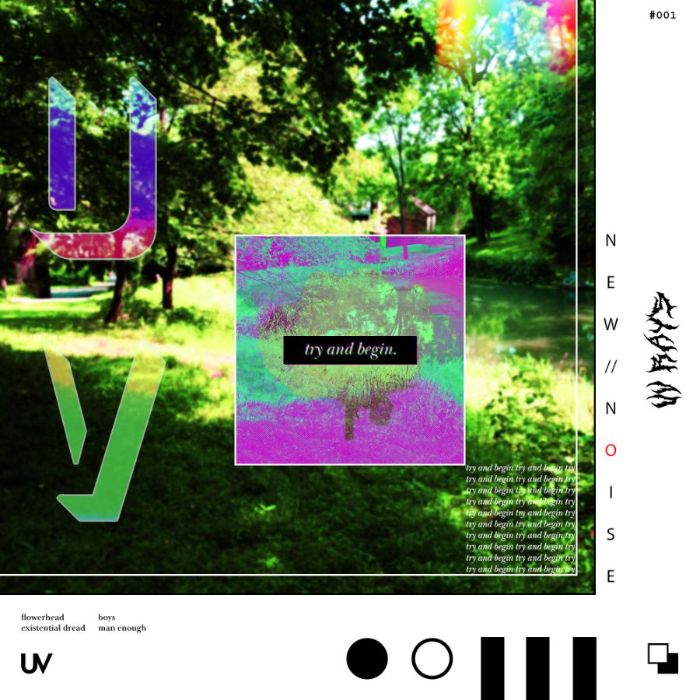 Originally the bedroom art rock project of guitarist / vocalist Adrien DeFontaine, Brooklyn four-piece UV Rays solidified their lineup in late 2017 and immediately began to churn out material for their first singles and EPs.

UV Rays – which also includes drummer / vocalist Erica Warner, bassist / vocalist Tim Marchetta-Wood and guitarist Danny Sullivan – have already carved out a name for themselves in the Brooklyn rock scene with their first singles, “Distraction” and “Facade”. These early releases have not gone unnoticed, and in 2018, the band shared bills with critically-acclaimed artists including Chastity, Haybaby, and Lina Tullgren.

UV Rays’ debut EP, Try and Begin, came out in early 2019, and was accompanied by an East Coast tour Their second EP, engineered by Ava Luna’s Carlos Hernandez and Julian Fader at Gravesend Studios, will be released in Summer 2019. – Max Savage Levenson