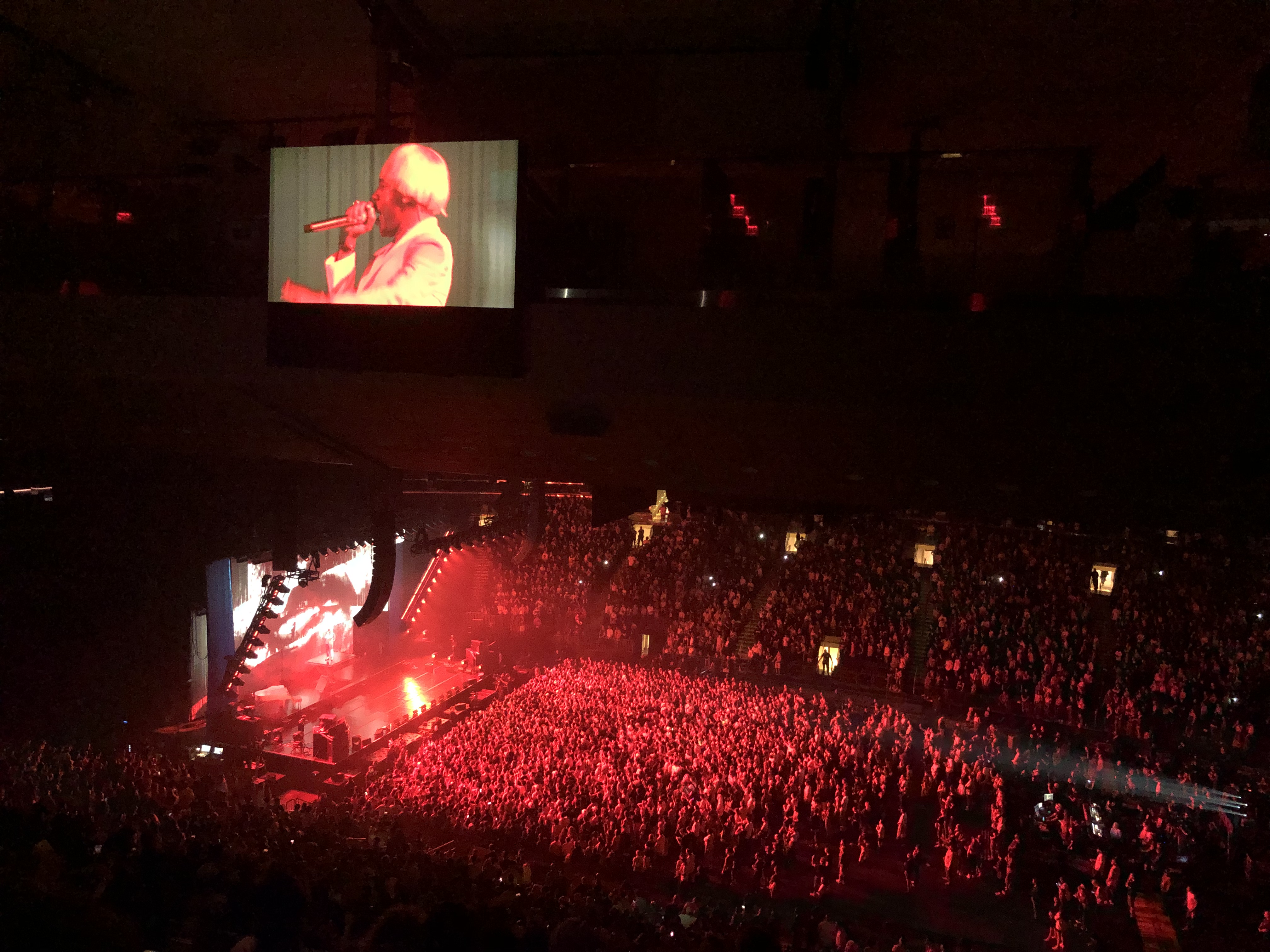 Towards the end of Jaden Smith’s sparkling opening  set Thursday night at Madison Square Garden, he told of the first time he met Tyler The Creator -backstage in LA at the “Watch The Throne” concert. Jaden was around twelve years old at the time (he is 21 now), and was alarmed to hear  Odd Future’s Taco Bennett point him out and shout, “Hey, it’s Will Smith’s son, let’s mug him”. About a year before that, I saw Tyler The Creator at Terminal Five (here), a watershed gig for the crew, featuring Tyler and Hoagy jumping off the first balcony into the audience. As noted back then: “It’s like they are a personification of teenage abandon; they never stop moving, they sometimes stop rapping, they engage their audience completely and their audience, in a running battle with security, embrace them right back.” While musically, well, not so much: “it was less like the Pistols and more like 50 cents and his posse when I saw them at Summer Jam when he first came out: when rock is amateur it is loud but fresh, rap is loud and obstreperous.”. Horrorcore? Hatecore? Tyler screaming about “faggots” and annoying the LGBTQ community and getting banned from New Zealand, Australia and  and the UK. “You have no idea how sick I am of this,” he had  screamed before letting the audience roar through the lyric to “Yonkers”.

Fast forward eight years, Tyler The Creator entered the arena to “Igor’s Theme” and was astounding for the first 30 minutes, six songs straight off his album about a (homosexual) romance from “I think I’ve fallen in love” to “you make my earth quake” (and don’t let the “girl” pronoun bother you, that’s a sop for Charlie Wilson). Tyler wrote and produced the entire Igor album (an ode to a River Phoenix lookalike?) and he presents it on stage as not a culmination of his career but a snapshot of a mindset that set the world aflame. He began the set stock still on a bare bone stage, and when the needle falls he bursts into an energy absorbing middle ground and then when it goes quiet, he goes quiet. This first half hour, from “Igor” to “I Think” (as in “I think I’ve fallen in love”) to “A Boy Is A Gun*” to “Puppet” to “Earfquak” (the latter turned down by Justin Bieber -I know).  Tyler has arranged a sound that has roots in Goblin, but extends it into a brutally honest vision of how romance can leave you weak, through r&b and superbly arranged soul music. Completely in the moment, on stage there is no band, everything is tapes, backing vocals are tapes, everything is programmed, and yet it only serves to tighten the proceedings, till on the last of the first six songs, he performs it alone on the piano, till he puts on the tracks, and passes it to the audience and then takes it back and sings it a capella. It was one of three moments during the evening. The first was Jaden Smith’s everything ambiguous performance, with videos of his songs in the back ground, which lead to the classic and Familial, with Willow joining her brother for a smashing “Summertime In Paris”. The third was A$AP Rocky joining Tyler for an earthquaking “Who Dat Boy”.

The Igor tour is something of a junior varsity vision of chill r&b, related to Solange/Frank Ocean at the Panaroma fest a couple of years ago. It opened with alt-R&B guy Goldlink, who talks  the talk, but fell flat when he didn’t have bangers strong enough to sell the energy level requested. The eight song, half hour set, was great when he had the right song, but Goldlink’s power is in a hazy r&b coolness like “U Say” -a great song, and from a similar place to both Jaden and Tyler, yet   why is he demanding a moshpit for it? Jaden is the definition of queer culture, I am not discussing homosexuality here, he is obviously Cis, i mean a sort of in the middle revolution of masculinity. On stage he can do everything, he dances less well, but he commands the stage, and doesn’t spend his time stumbling into hip hop cliche, but fifty minutes was twenty minutes too long, by the end he was dragging but at the end he dedicated “Icon” to Tyler and all was forgiven.

Tyler The Creator has become the man who goes his own way. Both Flower Boy and IGOR are masterworks by a man who has taken his public image and blasted it to pieces, Tyler performed “Yonkers” during the second six songs, and where does ” I’ll crash that fuckin’ airplane at that faggot nigga B.o.B is and stab Bruno Mars in his goddamn esophagus” fit into his honey suckle white boy love affair? Where does it fit in his “Please don’t leave me now, please don’t leave me now (Don’t leave)” -a grimey lovelorn song Tyler called his favorite on the album? The final of the second six brought A$AP Rocky on the stage (his return to homebase for the first time since he got out of jail) on “Who Dat Boy”. It was an explosive performance, an era defining duet with A$AP Rocky, the sweetness between the two (the way A$AP hugged him at the end!) upended the call and response with the boy (our line: who him is) brought Rocky, Tyler, and us, all together for the evenings greatest moment. So far we are talking borderline best show of the year.

It could have been me but the final third was a slog to reach “Are We Still Friends”.

Even so, it was the second best time I’d seen him (the best? here). The malaise that left me so disinterred during Cherry Bomb days  is completely over, an Icon is the least of it.