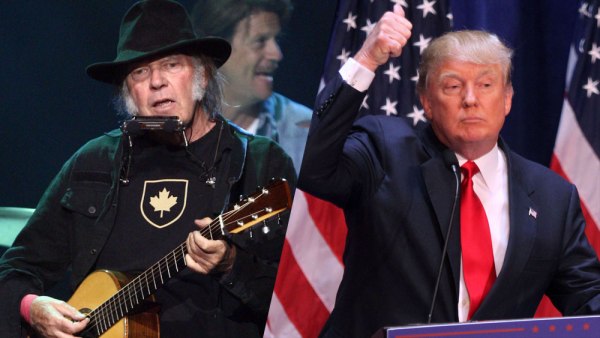 Trump has failed to get Neil Young’s approval

If you are here, it must be because you have an interest in music, because music matters for you as it does for millions of people. Humans love music and if we ask people what they have missed the most in 2020, I am pretty sure that live music will be high on the list. Music is part of our lives, it brings comfort during the most lonely moments and enhances the happiest ones.

Donald Trump’s life must be very lonely, if President Barak Obama shared his last playlist a few weeks ago, a playlist including artists such as Frank Ocean, Megan Thee Stallion, J. Cole, the Chicks, Rihanna, Childish Gambino, Billie Eilish, Maggie Rogers, Leon Bridges, a selection demonstrating how much in touch with the current scene he is, Trump cannot even use a song for his rallies and convention without receiving harsh criticism or even threat of a lawsuit. The last example is his use of Leonard Cohen’s ‘Hallelujah’ at the Republican National Convention, it was received by a statement from the Cohen estate saying they specifically rejected permission for the use of the song, adding on a very ironic tone that they would have only considered approving Cohen’s song ‘You Want It Darker.’

It is far from being anecdotal, as it is actually one musician on a long list. Basically, every song that has been used by Trump has triggered complete disapproval by the artist. When Trump used Guns N’ Roses’ cover of the classic McCartney and Wings song ‘Live and Let Die’ while visiting a meatpacking plant in the middle of the pandemic, Axl Rose didn’t like it at all (even though the title of the song sounded very appropriate) and immediately created shirts with the phrase ‘Live N’ Let Die With COVID 45,’ sold with all proceeds going to the MusiCares COVID-19 Relief Fund. When Ivanka Trump arrived on the stage at the convention, you could hear Elton John’s ‘I’m Still Standing,’ and since Elton John had already disapproved of the use of his music during Trump’s campaign in 2016, it’s bizarre he didn’t slam him again.

There is a long list of musicians who have requested their music not to be used by Trump: Adele in 2016, Bruce Springsteen, who even released a song ‘That’s What Makes Us Great’ in response to Trump’s use of the boss’ anthem ‘Born in the USA,’ Neil Young who objected many times to the use of his song ‘Keep On Rockin In The Free World’ that Trump has continued to use as recently as 2 months ago, during his 4th of July event at Mount Rushmore. Prince’s estate has condemned Trump’s use of ‘Purple Rain at a rally in 2019, Tom Petty’s estate has denounced Trump’s use of  ‘I Won’t Back Down’ and even sent a cease and desist letter. The Rolling Stones did the same when Trump used ‘You Can’t Always Get What You Want’ and they even threatened him with a lawsuit.

Name an iconic song and a classic band and you have an illegal use of a song by Trump: Queens’ ‘We Are The Champions,’ R.E.M.’s ‘Everybody Hurts’ or ‘Losing My Religion’ Pharrell Williams’ ‘Happy,’ George Harrison’s ‘Here Comes the Sun,’ Rihanna’s ‘Don’t Stop the Music’… Even when Trump’s campaign uses a song in a clip, he gets sued, the latest complaint being Eddy Grant, whose hit 1980s song ‘Electric Avenue’ was featured in a clip for Trump’s campaign, whereas Ozzy Osbourne sent a notice to the Trump campaign after the use of ‘Crazy Train’ in a video.

This has reached such a point that, at the end of July, dozens of high-profile musicians have partnered with the Artist Rights Alliance in an open letter demanding that politicians get clearance on the music they play at campaign rallies and other public events. They are asking for consent from the artists before the use of the music in campaign and rallies, this seems reasonable, but this will never stop Trump! But in any case, Trump has failed to get the approval of one single pop or rock star for the use of a song, and the Maga hat is definitively very lonely in the music world.