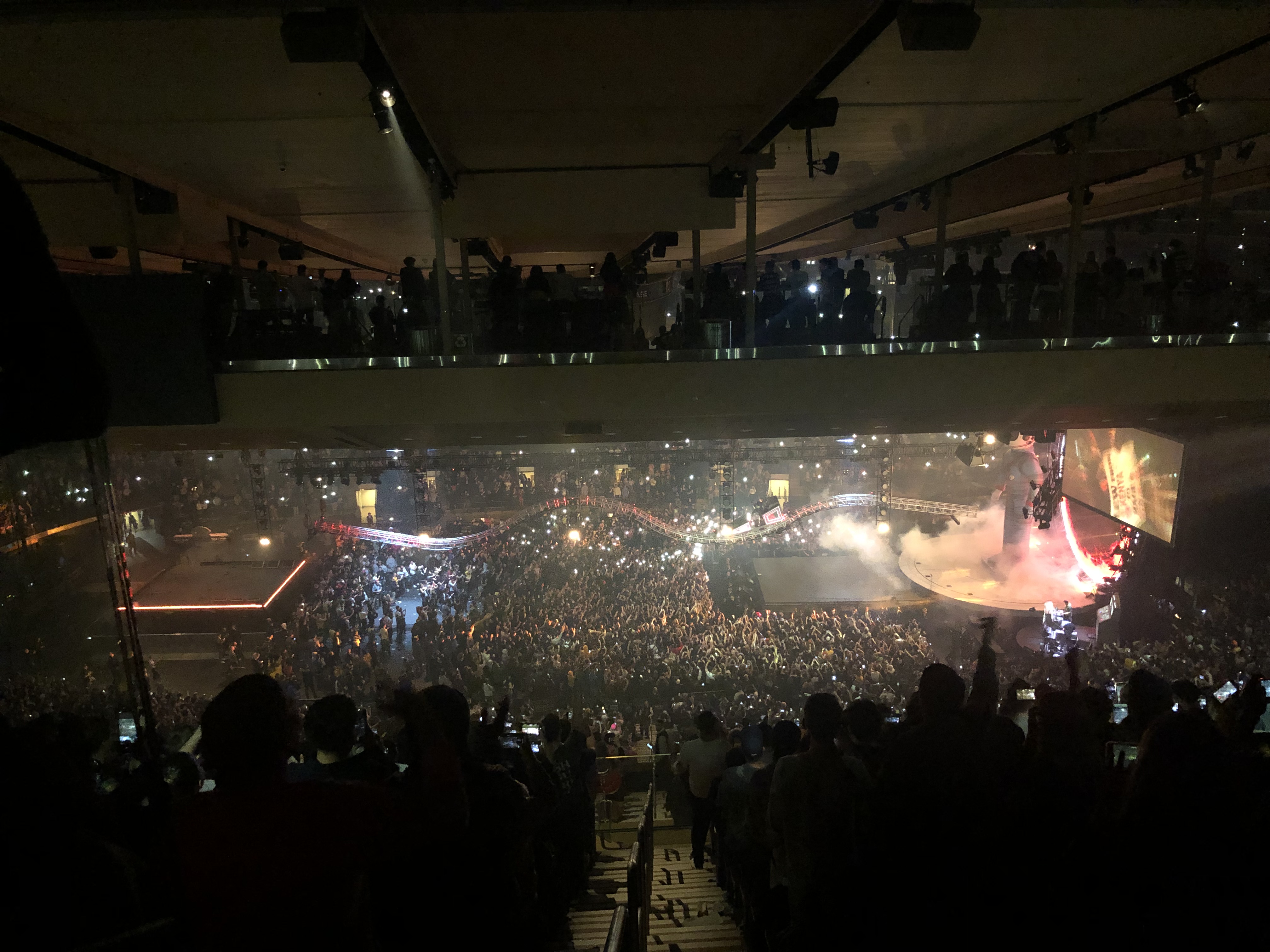 “New York City, what the fuck is good man?” Travis Scott, one of the most popular rappers anywhere in 2019, fresh from being the best thing about the Super Bowl halftime show, riding the huge, excellent Astroworld album still in the top ten seven months after its release, on the second leg of his sold out  US tour, the cover of the Rolling Stone under his belt, a first time father married to a billionaire cosmetics CEO Jenner, Kyle, and returned to Madison Square Garden last night, four months after providing the venue one of the great hip hop performances, the answer should be, it’s all good. And it is all good. Just not all great.

In November, Travis Scott gave us a lesson in giving us our money’s worth. Opening was Sheck Wes, Trippie Redd and Gunna, who provided short but solid sets before Travis blew us to Houston and back (here). Last night, there was only the excellent Sheck, a Senegalese rapper who move to New York City as a teen, and now is performing for a very appreciative audience of  young natives. His mother was in the audience seeing Sheck on stage for the first time, and his performance was energetic but workmanlike; a nine song set with three out and out bangerz much loved by the youngsters in General Admission, who screamed along merrily.

But then Travis discovered what Billy Joel had already found out, he didn’t need to gild the lily with other performers and on Saturday night left us sitting on our hands for an hour, he didn’t even have a DJ: we just sat there in silence except for desultory shouts with TRAVIS SCOTT, an example of where calling an artists name isn’t a compliment. It was a pathetic misstep and goes to two things:

1 – Travis was getting away with everything he could get away with.

2 – He is so indolent his set didn’t even hit the 90 minute mark. I have no problem with short sets (I loved Fire Engines and they performed 20 minute sets) but not when we are being kept waiting because you can’t fill your allotted time.

The thing about life is that if you are on top of the world then even if nothing changes at all, you will come back down to earth again, we aren’t fitted for over the top joy, it isn’t in our DNA. And things had changed. The last time Travis was in town, baby Stormi was dancing in the green room with her Mommy Kylie, Kylie climbed on the rollercoaster at the end of the November show and into the future with Travis. This time round she’d had a huge fight with Travis over his (denied) infidelity and his family was nowhere to be found, Travis had cancelled a Buffalo show a week before.

ASTROWORLD merch will be available for purchase inside the Hulu Theater at Madison Square Garden lobby beginning at 10am THIS Saturday, March 2nd before the Travis Scott show!

Open to the public.
You do not need a ticket to enter this area.

Don’t miss your chance to get your hands on exclusive Travis Scott ASTROWORLD merch found only on tour!

LOCATION:
Upstairs in the Hulu Theater at Madison Square Garden

And even with that, the lines for the merchandize were horrific. I jumped out of my seat in the middle of the set to get a tee and was still stuck waiting for twenty minutes. The merchandize is just about as important as the show itself… here, take a look: 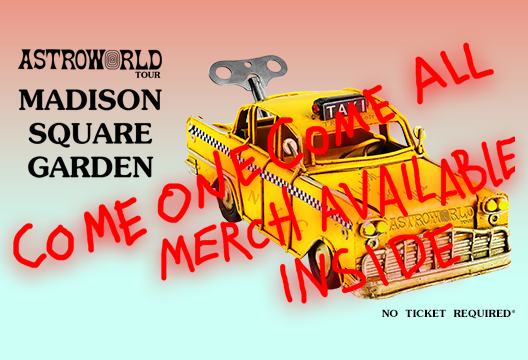 The one hour break stalled the show and the show we got while it looked the same was missing something.

At least catching it again, the sensory overload that colluded with Travis to cloud the show was dissipated. There were two stages, the small one fitted a Ferris Wheel, where lucky chosen ones got a ride, and a rollercoaster connected the smaller stage to the larger one. The set was splendidly paced, a couple of hits, a lull that also included the finest vocal moments of his career, “Mile High” -he was featured on the James Blake song,  followed by “90210” followed by “Love Galore” -this put to the side exactly and completely his raging anthems for the trap as emo-rap side of his character, and finally a three song super hits finale, “Antidote,” “Goosebumps,” and “Sicko Mode”. That’s how you do it, if you have the material and the skills, you spring at your audience.

But Travis, while certainly energetic, also seemed a little sad and distracted, at one point knees bent into the middle of MSG with his head in his hands while the audience went berserk it looked as though he was about to cry. His timing was off, his segueing between songs a little too long, and his singing found him a little out of breath, though he certainly wasn’t letting the backing tapes carry him.

You can’t go home again and Travis didn’t manage to, but it was a smart, well crafted set and the merchandize was awesome.