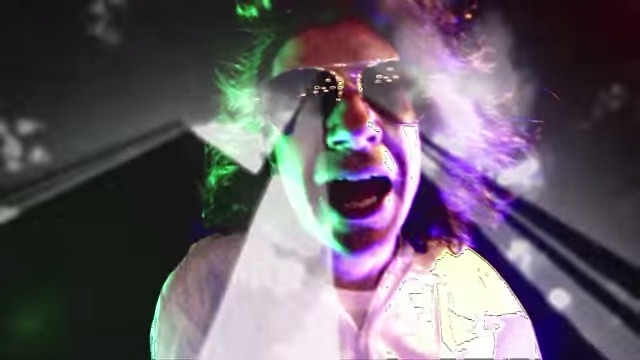 Watching James Dellatacoma at work is not a surprise, with his blonde hair, goatee, and plaid shirt, he looks like a hippie after a visit to silicon valley: hunched over a PC, wearing cans over his ears, and a seriousness as intense as his cheerful smile and welcome is infectious, you think he must be programming silos or hacking the world bank or something. Only when he plays back a sax solo for his partner in True Groove Records,  Tomas Doncker, does the clear sightedness of his musical vision become clear. The move from recording to producing is an instantaneously switch up and playback, it is George Martin on steroids.

A couple of years after watching James at work on a funk album,  I meet with James and Tomas, to discuss Dellatacoma’s debut EP, as alter ego Touchy Feely, Title Huevo. The five songs are genre defying, electronic wonk nerd strokes of, strange, experimental, but, ultimately, pop songs. James uses  cutting edge technology to form perfectly crafted jewels; the sort of stuff you can only pull off only  with an extreme comfort zone in sound. “Very much so,” James agreed. “Without the advancements in digital audio technology, I couldn’t have played all the instruments, sampled myself, or programmed the drums or synths. It helps that I work in a recording studio. I’ve literally worked on a computer, almost everyday, programming digital audio material, for the last 20 years.”

The experience pays off constantly, whether it be switching up songs from electronic mood to heavy metal mode with the click of a finger, or allowing the nerdy one to change into Touchy Feely before our eyes. Last December, James left the stage mid-set at the Bitter End where he Clark Kented the True Grooves on guitar at the back of the stage, only to return as his alternative, moonage daydream, outer space pop star. It is those matching of instincts that makes Title Huevo such a perfectly other experience: “(It’s) a small collection of recorded material I had been working on over the past 8 years. It started with drum machine and synthesizer sequences. Just experimentations with a specific bank of sounds. They weren’t really songs until I start playing guitars on them.

“I wasn’t even sure that I was going to add vocals. But I played some of it for Tomas, and he liked it. He encouraged me to sing on it, but to make the voice clear and present so the listener could hear what was being sung. As someone who never took his voice or lyrics seriously, I was reluctant to do this. But I thought about the voice being another instrument in the mix and the words being poetry. I’ve always like lyrics that are obscure.”

The result is Title Huevo,  an EP where David Bowie meets Whitesnake meets Eno somewhere in the far future, “Peanut Butter And Darkness” adds Trent Reznor and Beck mash up  to the influential mix. The songs keep reminding you of someone and then stopping entirely and sounding like nothing else: “Ween, Kool Keith, Black Sabbath, Beck, Bowie, Kraftwerk, Prog Rock, Noise, sunsets, science… A lot of how I created this music was improvised. I would just record as much material without putting much thought into it. Then, I would pick, choose, edit what worked best. This is a common approach, I think, for a lot of producers who work digitally. Like I said, I start creating the skeletons of this material about 8 years ago. And every now and then, I would add something to a song, or edit a material into a song arrangement. Eventually they just became songs. I don’t really know why it took me so long. I guess I wasn’t focused on putting it out, until now.”

That creating the skeletons over eight years is precisely what you expect from James, I was at the Weezer concert with Doncker last week, and James was sending him snippets of the production on a Sam Huber remix while we watched the set. When he is not with his wife and daughter, James is rehearsing or performing live gigs, and when he is doing neither he is in the studio. If Malcolm Gladwell’s 10,000 hours of practise to be good at anything is accurate, James passed his audition early. The New Jersey native is one of three boys, he was a preteen when he began to learn music: “I was 9 years old when I got my first guitar. I certainly was not a prodigy. Just a fast learner. I had a couple years of trumpet lessons before that, so I was familiar with musical notation. Guitar seemed like an easier instrument for me, so I put down the trumpet to focus more on guitar.

“Up until 9th grade (1991), I was really into Hard Rock and Metal, mostly what was featured on MTV. I liked bands like Motley Crue and Metallica. I didn’t really like 80’s r’n’b or New Wave. It had to be guitar driven and aggressive. I did, however, like Rap/Hip Hop. That seemed different to me. Run DMC and Public Enemy sounded revolutionary to me.

“Throughout high school, I like mostly Alternative rock and Grunge. Soundgarden, Alice in Chains, Blind Melon were probably my favorite bands at that time. Around age 13, I joined an acoustic folk group that played during Mass, at the church I grew up in. At age 14, I started 2 bands, one was called Spubba. We played alternative rock covers. The other band was duo, called Shmeg. This was a lo fi DIY project, in the spirit of They Might be Giants or Ween. When I was 16, I joined a band called Absence of God. This was a thrash metal band. Shortly after college, I was in a Zelda Pinwheel, which was a melodic noise rock band. This band was probably the most successful, with several full length releases and a following in the tri-state area.”

Soon the Jersey boy was off to college: “I went to Rutgers University to study communication/media. Afterward I graduated in 1999, I went to the Conservatory of Recording Arts and Sciences (Tempe, Arizona). That was a technical school that taught professional audio recording and production. By the time I was in college I was more open to different music. I had discovered Miles Davis’ Bitches Brew. The Melvins. Brian Eno. I was definitely into more experimental music by this point.”

Then came Bill Laswell: “After graduating from the Conservatory of Recording Arts, I came back to New Jersey. I was looking for a studio internship in Manhattan, when a friend passed along the phone number of Robert Musso, who was Bill Laswell’s engineer at Orange Sound (Bill’s Studio). He told me that Bill had a big project coming in and that they could use an extra set of hands, to do lunch runs, clean up, etc. Having been a fan of Laswell’s records for years, I jumped on the opportunity.That first project was for a Ethiopian Vocalist, Gigi, which turned out to be a big record, world-wide. After that project finished, I just kept showing up to the studio to help out, and eventually Bill hired me as a full time assistant engineer. Today, I still work as Bill’s engineer, as well as manage the studio.”

And that was how James met Doncker. Doncker had worked with Laswell and when Doncker used Laswell’s wife, the Ethiopian singer Gigi on a recording, James went with the couple to the studio: “Tomas was working on his album, Power of the Trinity, at a studio in Brooklyn. He invited Bill and Gigi to perform on one of the tracks. Bill asked me to come with him to help set up his bass gear, as well as meet Tomas. I hadn’t heard of Tomas, or his music, before. But I was immediately impressed by the quality of what he was producing. Bill went on to connect us further by urging Tomas to work at Orange Sound, with me as the engineer. I believe (Tomas) was impressed with my work immediately because he continued to call me.” 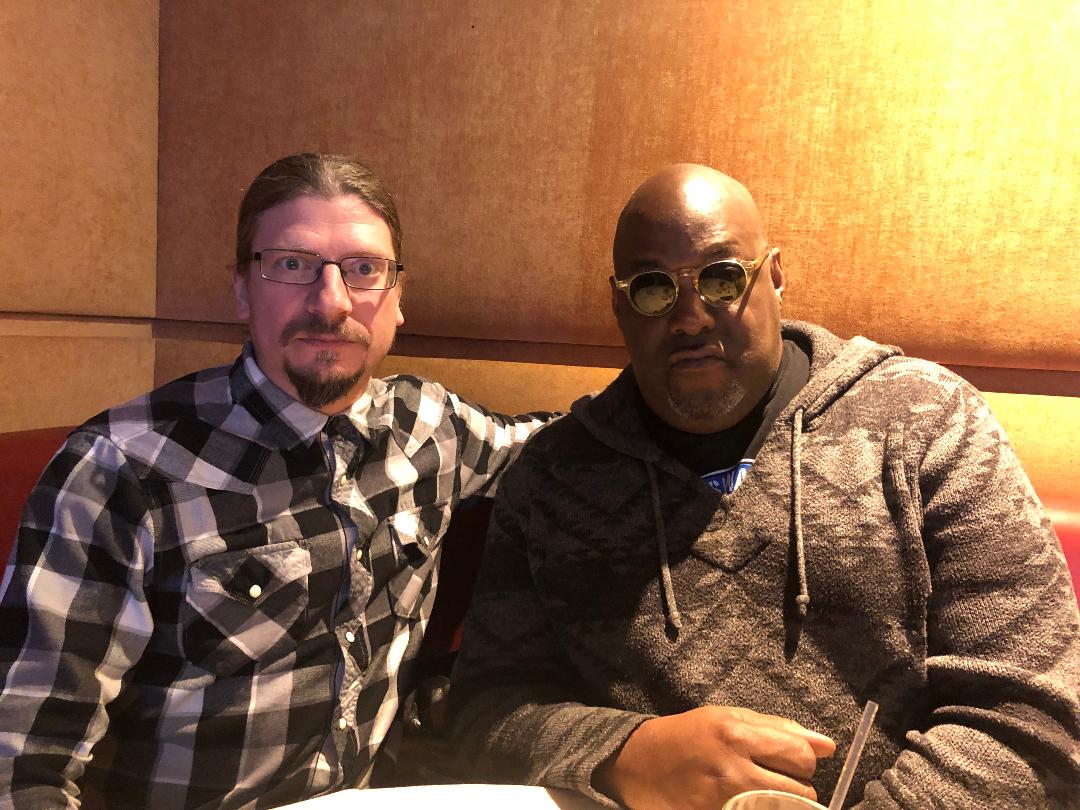 Tomas noted that the two have worked together for so long that they share a musical shorthand and James can make a sound for Tomas where others claim it can not be done. Essentially, James produces the music and Tomas the vocals, but it isn’t so clear cut a sharing of responsibilities: “Tomas and I have worked closely together for about 10 years now. We co-produce almost all of the output on True Groove Records. More importantly, we’re close friends, who share a lot of the same interests in music, movies, culture, etc. And we’re both guitar players, so we love talking about gear and showing each other new riffs. That’s a language in itself.”

We know what to expect from James Dellatacoma in the immediate future, you can meet the music man when he plays guitar at Thursday night’s Parkside Lounge “Black Magnolia Project” performance. But how about Touchy Feely? “We’re going to put together a live show, with a band. And play some gigs in NYC, New Jersey, and Philadelphia. I do have new music that I’m working on, and have started to record it. All I’ll say is that it’s different from Title Huevo. It’ll be longer and carry a theme, throughout. I hope to finish it this year, and release it early in 2020.”

There is an ease about James that makes him a pleasure to be around, it is as though he achieves through industry, skills, ability, and that extra spark, a zen like quality that makes it seem like a trick: that easy going smile is pure James, that spaceage, electronic wizardry is pure Touchy Feely. Long may they battle for your ears.