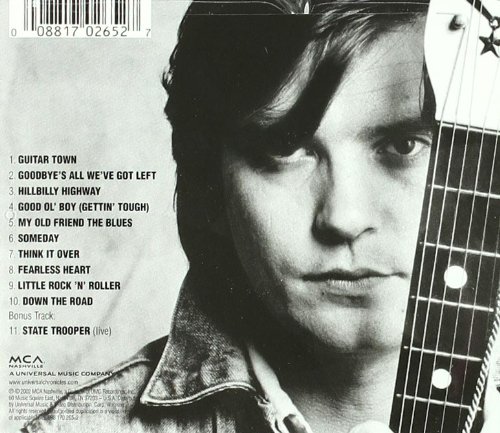 Some days an album comes along that just whacks you like an Ali left cross, and shakes up the music industry as well. This is one of them.

Back in the day, when you actually dropped a needle onto vinyl, just the first strum of a G chord, it is as iconic as the first note of “Take It Easy”.

“Hey pretty baby are you ready for me?”

One look at the guy told you he smoked too damn much weed to get on the Opry, and frankly no one knew what the hell to do with him. Too rock for country, too country for rock sort of chap.

It is one of the few albums that I can honestly say, there just isn’t a bad song on it. The only competition they have was the track before.

While, the title track is likely the most famous, and rightly so, there was another that just screamed at me, like he was talking straight to me. I was that guy with $37 and a Jap guitar.

I had watched so many friends go through the exact same scenario. Got a factory job just out of high school, and they’re making a solid $6.75 an hour for pushing a button.

Pretty soon they bought a TransAm or a truck. Then they knock some girl up, and now they got wife and kid, and eventually a house, and they are stuck. All they know of cities, is that is “just a buncha nig$%@”. They have never flown on an airplane.

There was just a sense of hopelessness that inhabited them. They knew at 21, that this is it man. I’ll retire in 30 or 40 years. But this is it.

When this album came out I was back in my hometown, working a shit job. I was kind of in, as the Cubs might say, a “rebuilding year”, trying to kick a meth habit and build myself back into a human.

I was standing at the end of the line of the factory, smoking a huge joint of the worst ditch weed I had found growing up a gravel road next to a cow pasture, and my heart was low on fuel.

I could see the lights from the new truck stop on the interstate, and just pined.

The biggest thing to do in our hometown, was to do “the circuit”. That was a lap around downtown, out to the lake, then do it again. All the while hoping you would just see someone else out, find someone to buy you some beer, then go sit on a gravel road blasting Skynyrd and drinking.

It was nearly the death of me that town. It was a place where hope went to die.

So when I heard the first words of this song, I cried, because I was so afraid the same thing was going to happen to me.

I had already served in the military, and been truly around the world, and the town was just too damned small to hold me.

Just via the old hometown newspaper, and social media, I see all my old friends. Retired after 30 years with the sewer department. Beloved long time high school janitor.

I was incredibly lucky to get a second chance to get out again, move to a big city and make something of myself.

But there isn’t a day that goes by that I don’t think “there but for the grace of god”, and remember my old friends, who just never had a chance.