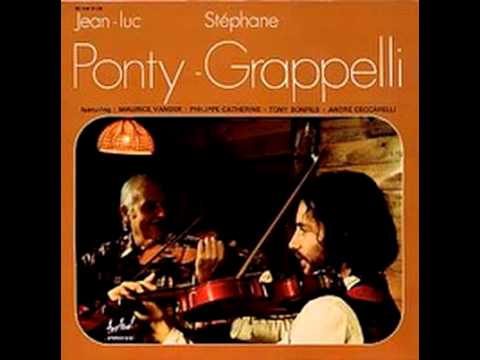 A rare treasure, bought from a remainders mail order catalog probably 1978. $1.99 I believe.

I had been messing with the fiddle long enough to play in public. Dances and at festivals etc. Old timey string band stuff. Once you get it going, it’s like a locomotive. I was consumed by it. Yet there was always something about the violin that haunted me. That fat, sweet sound, where the thing just sings. Rick Veras has it. The fink.

I was already a huge fan of Grappelli from his work with Django and the Hot Club. Got to see him live at Charlotte’s Web.

Ponty I knew from his work with Zappa and whatever made it onto late night FM. So, when I saw this it was like worlds colliding.

WTF? I mean OK, they’re both French – it could work, but come from such different musical universes its unholy to put them together.

Rumor has it Grappelli had never heard the tune before they recorded this. Ponty just played the first little line, and Grappelli nodded silently.

I can’t tell you how many hours I spent in a Columbian haze playing along with this tune, trying to steal even just a sliver of it, but alas, never got much farther than the main melody line, a joy unto itself.

Stephane Grappelli on the violin
Jean-Luc-Ponty on the electric violin.

Headphones are your friend here.