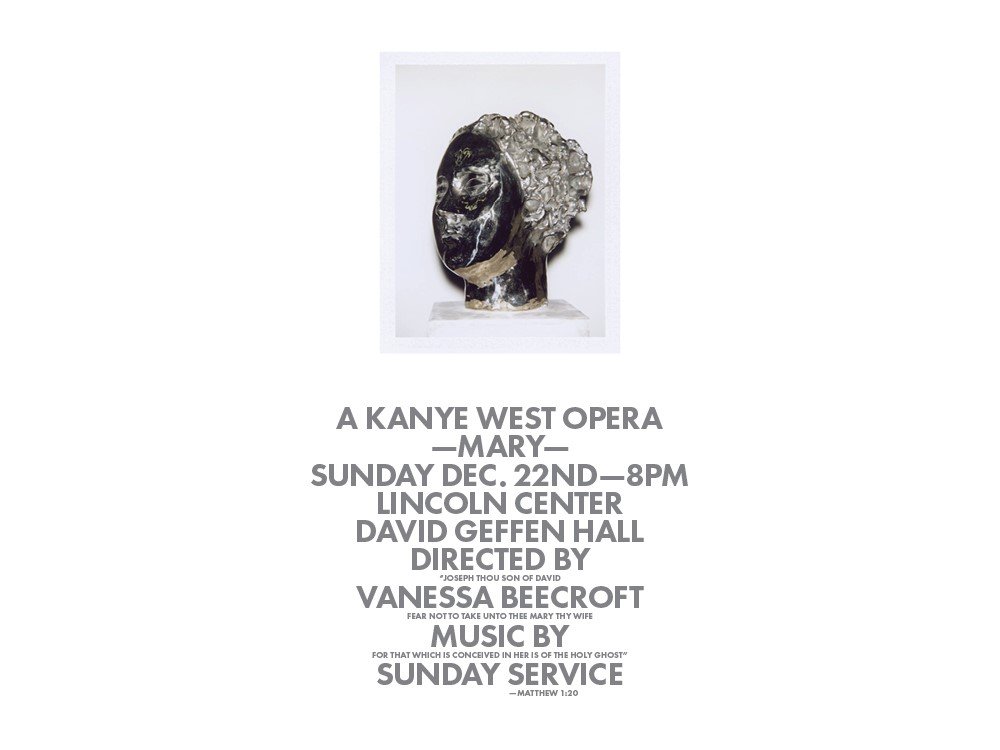 Kanye West’s Opera: Since West is my music artist of the decade, you know I want to see this. I assume it is terrible but I want to see it anyway. The reviews haven’t been great (here) for “Mary” when it arrived at Art Basel on December 8th, but better than his first opera at Hollywood Bowl, “Nebuchadnezzar,” which started two hours late and lasted 40 minutes. “Mary,” about you know who, was an hour late and lasted an hour. According to Billboard, “Devil In A New Dress” and “Can’t Tell Me Nothing” make an appearance when Joseph doubted Mary’s fidelity (not that you can blame him). I bought a ticket for $211 from Lincoln Center on Sunday at 8pm, it was far from sold out (Art Basel and Hollywood Bowl both were). One reason is $200 were the cheapest ticket put on sale, another is a generalized uncertainty. Even I slept on it before buying a ticket, and I am a huge fan… In the end, West is worth the risk.

The Trump Years: It is hard not to admire three years of unbridled prosperity and a POTUS who is tough as nails, starting fights with… well, with everybody except South Korea and Russia. Unemployment is at 3% and the average wage has gone up. When Trump says he has done more, financially, for black people he ain’t talking smack. But is it all enough? When the fabric of a society is sullied, when the US stops even pretending to have the moral weight of the world, the price is way high, too high. And when the US is ignoring.

Old Music: The reason why I go through entire catalogs of albums by artists is because I want to know now what I didn’t know then. Now I know, the first two years of Aretha at Atlantic Records were astonishing, and Sinatra at Reprise in the mid-1960s were not what they needed to be.

Disney Plus: There isn’t enough product to sustain it. Same with Apple TV.

Movies: More than music criticism, movie criticism is the essence of the herd mentality as proven by the claims of masterpiece for Martin Scorcese’s distraught “The Irishman”. The CGI aging techniques were terrifying, the story a plod, and, sure, Joe Pesci was all that, no one else was – Grade: C+

New Christmas Classics? In case you were wondering why Mariah gets an A+, here is Billboard’s other modern Christmas classics:

Mariah Carey, “All I Want For Christmas Is You”

Kelly Clarkson, “Underneath the Tree”

Britney Spears, “My Only Wish This Year”

Pentatonix, “That’s Christmas To Me”

Fiction: the first completed draft of “Memory Motel” is finished and Paula Iwamoto-Schaap (sometime rocknyc.live scribe) is working on the edit… so back to short stories and “Everlasting Love” is first up! When I went back to complete “Memory Motel” I stopped “Everlasting Love” half thought out  but now I want to really concentrate upon it. It isn’t a nostalgia story in the sense that 1) it isn’t even slightly true and 2) it isn’t a time in my life I miss (there are two times I miss, Beirut 1975-1976 and New York 2004-2005 -that’s all). BUT some of the things I need, I need from the late 80s early 90s (for instance: powerful record companies), so I am going back there for my Incel story. I  have more than the outlines but less than the complete story. So this year I wrote seven short stories and a novel and self-published two of them to the world’s complete indifference…

Death: I know, time to move on. But Juice WRLD’s death is still a huge loss and I am still reeling a little. There is a Nicki Minaj song to come so I am excited for that, but it feels like the worst of the three young deaths that killed off soundcloud rap (unless you can take Smokepurpp and Trippie Redd that seriously -both are talented but neither can lift a rap genre…)

The weather: a high of 26 degrees and as I write this it is sixteen degrees. What is happening to the change in season? New York City in December should be in the mid-30s.

Fairness: While I am not a Kantian as such, I agree in theory that  ‘conscience is the test certificate for religiosity. The inner rightness is the road, according to ones personal ability’s, to resemble the archetype of Devine order”. In that way, the worst thing Trump has done is make liars out of all of us… I mean that Trump is so terrible that people can’t give it up for his achievements. Put it this way: after three years of a bull market, the addition of hundreds of thousands of jobs per month, the economy is Trumps, not Obamas. If Wall Street was tanking in late 2019, if unemployment was at 17%, who would blame Obama? Who could? Therefore, the reverse must be true. As loathsome as Trump is, it is immoral not to judge him fairly. And more, it ruptures your moral backbone.  Try this on for size: the great Depression in the US gave rise to the Third Reich and Hitler came back and brought Germany back from starvation and poverty. To say that is far from giving sustenance to the worst political character perhaps of all time (maybe Stalin is? maybe William Henry Harrison -extinction isn’t much of a calling card: “By the close of the Indian Wars in the late 19th century, fewer than 238,000 indigenous people remained, a sharp decline from the estimated 5 million to 15 million living in North America when Columbus arrived in 1492”). The best thing the opposition can do is be Kantian, to be fair, lying, or at least not caring, about the truth hurts everybody always.