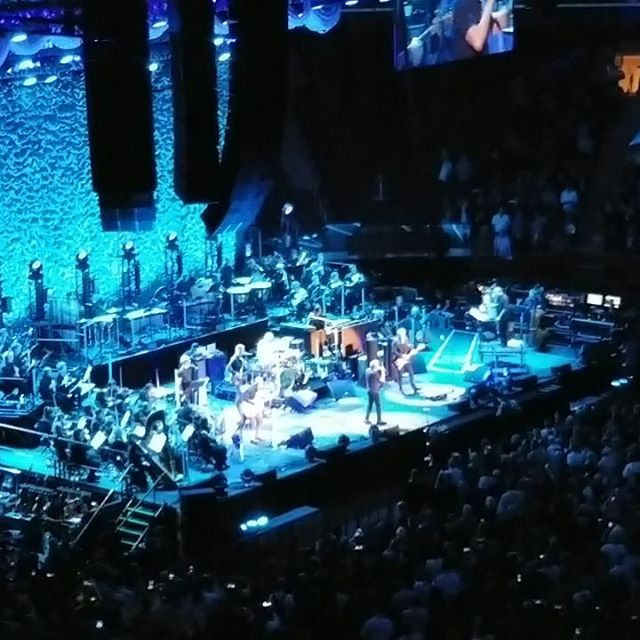 I will never forget the first time I heard “Tommy”. I was 14, 50 years ago, in my friend Terry’s room. He told me he had this new album I had to hear. We listened to it all the way through. I was blown away by the music and the haunting image of the deaf, dumb and blind boy. I bought it as soon as I could, and wore that sucker out. Little did I know that 50 years later I’d be hearing some of that music with a full orchestra at Madison Square Garden.

The evening opened with a set by singer-songwriter Lesley Mendelson. She would have been pleasant to hear in a club, but her style was ill-suited to an arena. Chatting with my neighbor, I said she didn’t exactly fill the room. She replied, “I don’t think she could fill the first row”.

I had my doubts about the Who playing with an orchestra. Would this be another example of an aging band trying gin up interest with a gimmick? My doubts were eased from the first notes of the Overture from Tommy. The orchestral accompaniment greatly enhanced the performance of the material from this album. After all, it is a fucking opera. Daltrey was in good voice, and Townshend seemed inspired, giving us a few trademark windmills.

After the abbreviated Tommy set, the band went on to do a few songs from later albums. Pete’s singing on Eminence Front was passionate. Join Together turned into an audience singalong.

The orchestra then took a break as the Who played a more traditional set. The best song in this portion of the program was the usually anthemic “Won’t Get Fooled Again”, reimagined as an acoustic duet with just Pete on his Gibson jumbo and Roger singing. This proved to be another audience participation number. Outstanding!

The orchestra returned for an extended set from” Quadrophenia.” It was particularly thrilling to hear the long instrumental The Rock with full orchestration. Pete sang Drowned immediately before, giving Roger a chance to rest his voice for “Love, Reign O’er Me.” They closed with Baba O’Riley, with first violinist Katie Jacoby nailing the violin solo.

During the bows Daltrey berated audience members down front for smoking pot, to which he is allergic. He says is negative affects his voice. So why not make an announcement at the beginning of the show? It came across as a petty ending to an otherwise great evening.

We’re Not Gonna Take It

I Can See For Miles (tour debut)

The Punk and the Godfather