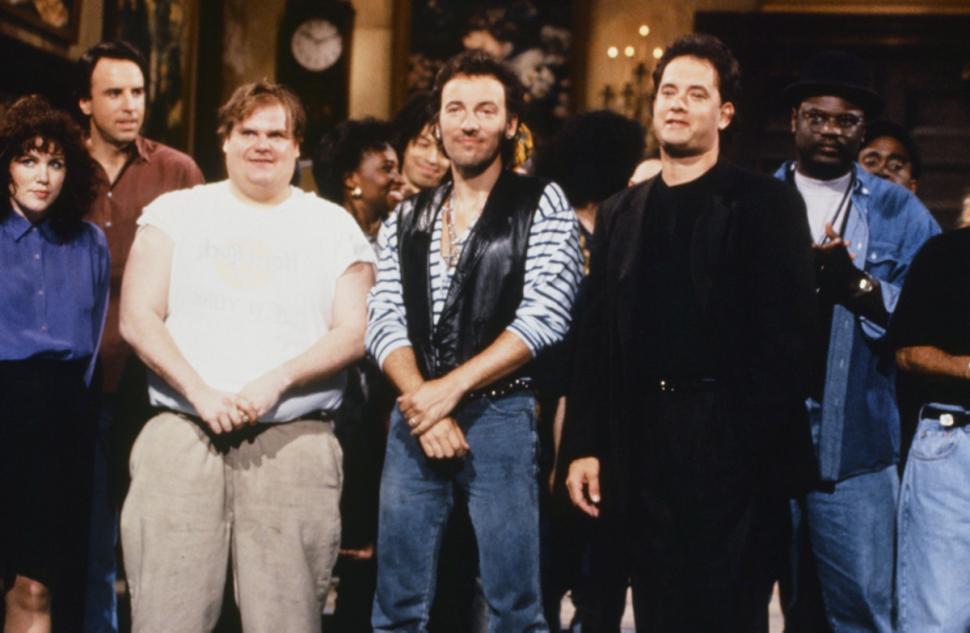 450. “Mexican God,” Robyn Hitchcock. Songwriter: Robyn Hitchcock; Did Not Chart; 1999. Robyn Hitchcock has built a beguiling and fascinating artistic path since his punk era band the Soft Boys by matching melodies that stick with quirky/strange lyrical themes. Hitchcock mingles a touch of doo wop with death on “Mexican God,” the lead track from his 1999 “Jewels for Sophia” album: “Cruel, magnificent, roasting your people/I am secure at the end of your rod/Cut out my heart and it flies to the ceiling/Time will destroy you like a Mexican god/Oooh, wap shoo wadda dap.” Rock critic Zack Hooker, “’Mexican God’ boots the record off with the satisfying click of a classic-Robyn-Hitchcock-song-shaped peg being snapped into a classic-Robyn-Hitchcock-song-shaped hole: acoustic strumming, jaunty drums, bloodthirsty deities – three great tastes that taste great together.”

449. “Justified and Ancient,” The KLF. Songwriters: Jimi Cauty, Bill Drummond, Ricardo Lyte; #11 pop; 1991. The KLF (an acronym for “Kopyright Liberation Front”) was a successful British house music act comprised of former musician/record executive Bill Drummond and guitarist Jimmy Cauty. Using the name The Timelords, Drummond and Cauty scored a #1 U.K. hit in 1988 with the electronic novelty number “Doctorin’ the Tardis” (the duo used several recording names, with the primary ones being The KLF and The Justified Ancients of Mu Mu). As The KLF, Drummond and Cauty began having international hits in 1990 with the dance numbers “What Time is Love?” and “3 A.M. Eternal,” songs that updated the sound of the Pet Shop Boys for the hip hop era. The KLF had another major hit in 1991 with the left field dance number “Justified and Ancient,” which had lyrics about unknown entities being bound for Mu Mu Land. The U.S. hit version with country legend Tammy Wynette on lead vocals was a different track than the international single. Tammy Wynette, “I fell for the track the moment I heard it. It had a perfect melody, but I didn’t really understand what they were talking about.”

448. “Love Spreads,” The Stone Roses. Songwriter: John Squire; Did Not Chart; 1994. The U.K band the Stone Roses waited five years after their hugely successful debut album to release 1994’s “Second Coming.” The first single off that album was “Love Spreads,” a song that reinvents Jesus as a black woman with guitar sounds reminiscent of top tier ‘70s classic rock. From the Far Out website, “The lyrics of the song have always held a special place for their ubiquitous message of love and tolerance but while that alongside the rhythm section provide a baggy bounce of benevolence, it is John Squire’s guitar that moves the song into the upper echelons of the musical landscape. Squire manages to create a sonic structure that allows the grit and salt of Britain to be gilded by the bluesmen of Americana. Combined we get one of the best guitar licks of recent memory and one of the best songs The Stone Roses ever wrote.”

447. “Here Comes the Rain,” The Mavericks. Songwriters: Raul Malo, Kostas; #22 country; 1995. The Miami based band The Mavericks brought Latin and Tex Mex sounds back to country music with their six Top 40 country singles during the 1990s. Lead singer Raul Malo, the son of Cuban immigrants, updated the romantic angst/heartbreak vocal style of Roy Orbison. Malo, “Roy Orbison was more influential for his songs for me than even his singing. And I don’t mean to discount his singing in any which way — he was certainly an influence. But it was really his songwriting that drew me in to Roy.” Malo is “showered in pain” on “Here Comes the Rain,” a frequent lyrical theme from the band, but Malo is the type of singer built to transcend his material. Writer Joseph Hudak, “Malo possesses a voice that vibrates through a listener’s entire core.”

445. “Tear Stained Eye,” Son Volt. Songwriter: Jay Farrar; Did Not Chart; 1995. “Tear Stained Eye” is a Neil Young style country/folk song that comes from Son Volt’s 1995 debut album “Trace.” Authors Will Levith and Eric Danton of American Songwriter, “Inspired in part by record-setting floods along the Mississippi River in 1993, ‘Tear Stained Eye’ is nothing short of a Kerouac-worthy road psalm, with kernels of wisdom throughout. Possibly its most enduring lyric: ‘If learning is living/and truth is a state of mind/you’ll find it’s better/at the end of the line.’” Jay Farrar on the reference to Ste. Genevieve, Missouri, “It’s a historic town, and in the song, it’s just referring to the fact that every time the river floods, the town is in danger of being flooded.” “Tear Stained Eye” pairs the theme flood with reflective lyrics on personal exploration.

444. “Girl, You’ll Be a Woman Soon,” Urge Overkill. Songwriter: Neil Diamond; #59 pop; 1992. Covering Neil Diamond’s romantic angst/coming of age sexuality hit “Girl, You’ll Be a Woman Soon” was a spur of the moment decision for Urge Overkill and was the lead track to a 1992 EP. Vocalist Eddie “King” Roeser, “We did our version of ‘Girl You’ll Be a Woman Soon’ from memory. The lyrics, I don’t even know if they go that way. It speeds up, the fills are all over the place, it’s out of tune.” Nonetheless, it became a minor pop hit after being included in the 1994 film “Pulp Fiction.” Director Quentin Tarantino, “I picked it up and thought, ‘Wow, that’s a really cool track.’ And it just kept staying with me and staying with me. So then I worked the scene out with Uma (Thurman) and it ended up working fantastic, it became very iconic.”

443. “Eight Miles Low,” Cheap Trick. Songwriters: Rick Nielsen, Tom Petersson, Robin Zander; Did Not Chart; 1997. “Eight Miles Low” sounds like the type of song Cheap Trick would have recorded in the 1970s, mixing a boyish sexual obsession with dark sounds and inverting a title from the Byrds. Audio magazine, “’Eight Miles Low’ is a sinister track powered by detuned riffs, sitar tones, and menacing background screams that sound like lost souls echoing from the grave.” Author Robert Lawson, “’Eight Miles Low’ begins with a low drone before huge riffs obliterate the scenery.” In other words, we’re a few light years away from “The Flame” territory here.

442. “Human Touch,” Bruce Springsteen. Songwriter: Bruce Springsteen; #16 pop; 1992. Author Caryn Rose of Vulture, who placed this in the best 40 songs of Bruce’s complete catalogue of work, “After the emotional chaos that was ‘Tunnel of Love,’ ‘Human Touch’ is about what happened when Springsteen climbed out of the wreckage. It’s a frank and hopeful assessment of what he hoped would happen next. ‘We’re all riders on this train’ is one of his most important lines — it’s straight from gospel, from the blues, from Elvis. He’ll keep coming back to that metaphor. The live version is phenomenal, trading an overabundance of ‘90s synth-cheese for loud guitars. The song has a more urgent pace, and the final solo is fervent and direct. If you only like Springsteen because he reminds you of your misspent youth, you’ll write off ‘Human Touch,’ but if you’re interested in who he became as he grew up, you can’t skip this.”

441. “Streets Where I’m From,” Old 97’s. Songwriters: Rhett Miller, Ken Bethea, Murry Hammond, Philip Peeples; Did Not Chart; 1997. Rhett Miller displays his classic pop skills on “Streets Where I’m From,” singing about his broken heart on top of a bouncy melody, wondering how anyone over the age of 25 could possibly find love. A nice summary from Zac Johnson of All Music on the “Too Far to Care” album, “Rhett Miller’s swooning howl aches with too many miles on the road and too many lonely nights — familiar topics to be sure, but he still manages to tackle them like he invented heartache. The curse of Old 97’s may be that country fans consider it too rock & roll, and rock fans can’t get past the twang, but for those who dip both feet into these streams, it really doesn’t get any better than this band and this album.” Color me at home.