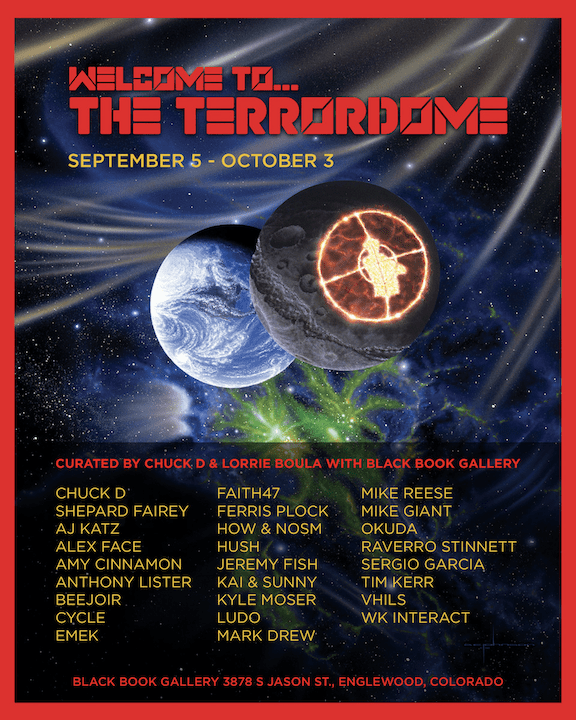 Artists from around the world will come together using Public Enemy songs, legacy and history as an inspiration to create unique and original art pieces for the first time ever at The Terrordome. Celebrating the 30th Anniversary of Public Enemy’s iconic third album Fear Of A Black Planet, the show will feature one-of-a-kind artwork from Shepard Fairey, Vhils, Faith47, Anthony Lister, Okuda Public Enemy frontman Chuck D and many more. The show goes from September 5 – October 3, 2020 at Black Book Gallery (3878 S Jason St, Englewood, CO 80110). A sneak peek at original work from How & Nosm, WK Interact and CYCLE can be seen below, and limited edition original prints created by Ludo, Okuda, Emek and Ferris Plock will be available August 29 through the Black Book website, in advance of the opening. Look for a full list of participating artists and additional artwork soon.

The Terrordome art show was conceived and curated by Chuck D and Lorrie Boulawho have been working closely with their partners at the Black Book Gallery, Tom Horne and Will Suitts. “Bringing visual artists and music together has always been important to me because it’s who I am,” notes Chuck D. “I was an illustrator and graphic designer long before I ever grabbed a microphone. We’ve been working hard at bringing together an amazing array of artists for the show, and look forward to people coming through to see their work.’

The gallery will be practicing COVID-19 safety precautions for those in attendance including limiting the capacity of the event. Details on tickets for the opening will be announced shortly. For additional information on the show, visit: https://blackbookgallery.com.

Public Enemy is hellbent on creating change where it is needed most, and have proven that rebellion is more than the sound of a musical genre, the culture of a social class, or the color of a skin; it is an unmovable, unmistakable state of mind and heart. Their classic albums are the soundtrack to hip-hop’s rise as a form of social and political commentary, most notably 1988’s It Takes a Nation of Millions To Hold Us Back which The New York Times included in their list of “25 Most Significant Albums of the Last Century”; and Fear of a Black Planet which featured Public Enemy’s signature song “Fight The Power,” used by Spike Lee in his film Do The Right Thing. and called it “the ultimate anti-establishment rallying cry” by Rolling Stone. The album also included the powerful singles “911 Is a Joke” and “Welcome To The Terrordome.”

The platinum-selling, GRAMMY-winning, Rock & Roll Hall of Fame inductees recently shared their fiery return to the frontlines, “State of the Union (STFU),” produced by DJ Premier. They also helped kick off the 20th Annual BET Awards in June with a powerful performance of their anthem “Fight The Power.” Intercut with protest footage and guest performances, Chuck D and Flavor Flav were joined by PE members DJ Lord, S1Ws for the 2020 tribute to the classic which also featured new verses by Nas, Rapsody, Black Thought, YG, Questlove and JAHI, recorded in various locations. Watch “Fight the Power (2020 Remix)” here: https://youtu.be/sHQolYuO6Ew.

Black Book is a full-service gallery. Established in Denver, Colorado in 2009, the gallery has mounted over 150 exhibitions with more than 100 artists to-date. We embrace new technology and digital platforms like social media in order to broaden our artists’ exposure and to support them by selling their work, both online and in the gallery. The diversity of the art that we show is a reflection of the constantly evolving visual, political, social and technological world that we live in. We are committed to exhibiting work that breaks with tradition and challenges convention because we always want our audience to discover something new.