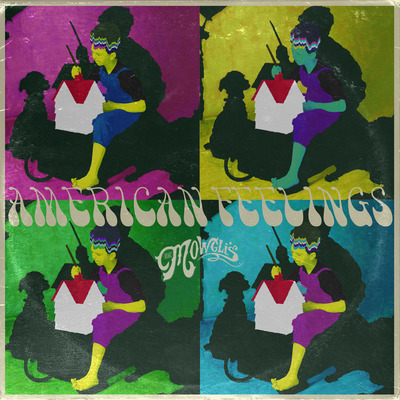 “[A] richly textured and rhythmic track…”

Southern California’s torchbearers of alt. rock positivity, The Mowgli’s have released their new EP American Feelings. The first three singles“Hard to Love,” “Mr. Telephone” and “Norman Rockwell” that have been released have received incredible feedback from fans and critics alike, and have garnered over 600K streams.

“‘Hard To Love”’ makes you want to dance to the lively rhythm despite the vocalists’ words about being “a little bit hard to love.” –Alternative Press

“The Mowgli’s build a case against mediocrity by mourning complacency. They depict an average American, craving so much more than what a day-in-the-life has to offer.” –Heart Eyes Magazine

“I can’t thank @Themowglis enough for creating music that is so pure and honest to what it’s like living in the world today.  #NormanRockwell” – Anthony Scardina via Twitter

From their beginning as a music collective in Venice Beach, California, The Mowgli’s have been writing songs of love, unity, and togetherness. Their break out hit “San Francisco” brought them national attention and cemented the band as indie-rockers with purpose and a message. Two subsequent albums and an independent EP have captured an ever-growing fanbase drawn to their feel-good anthems. As they’ve grown, the group has balanced their positive music with songs that give a window into the trials of a working band: Juggling relationships, friendships and adulthood with the rigors of constant touring. With American Feelings, The Mowgli’s have, perhaps surprisingly, found greater bonds than ever before: If nothing else, the path is shared and those sharing it have an intimate knowledge of what the journey feels like.

“I’m totally not crying. Feeling this song so much right now. Proud of you all! Homies, go listen to their new song! It’s so good! ❤️ @Themowglis – Norman Rockwell.”– Kaylynn Michelle via Twitter

“we need to talk about it…it being the  newest @Themowglis song… i’m in love.”  – Kayla Jonas via Twitter

The theme of connection and the lack thereof in our modern world is woven throughout the four songs that make up American Feelings. They all touch on the lack of discourse and engagement prevalent in society today, especially with technology serving as both a facilitator and barrier. “Mr. Telephone” serves up social commentary on our relationships with devices, over a subtly hypnotic, yet infectious melody.  “Norman Rockwell” sees the band take a more maudlin melodic turn with the song’s protagonist painting himself into a new world in his mind to escape the monotony of his current life. “Hard to Love,” the very first single from the EP, confronts the complicated idea of self-acceptance, over the bands signature sweeping melodies.  Rounding out the EP is “Talk About It,” a bouncing track about forgiveness and communicating through difficult situations.

“the new @ThemowglisEP has my newest favorite songs, there’s something to connect to in the lyrics of everyone and they’re all beautiful and catchy as HELL.”

The Mowgli’s – who began as a 10+ member group playing house parties and warehouse gatherings – is now comprised of singer/guitarists Colin Dieden & Josh Hogan, singer Katie Jayne Earl, drummer Andy Warren, keys player David Appelbaum and Matt Di Panni on bass. The release of their first major-label LP Waiting For The Dawn in 2013 saw immediate success with the hit single “San Francisco” and the band quickly found themselves playing to sold out crowds in clubs around the U.S. and inundated by requests for press, sponsorships and partnerships. The band’s music has accumulated 250 Million streams and counting, and they’ve graced the stages of major festivals such as Lollapalooza, Bonnaroo, ACL, Firefly, Osheaga, Arroyo Seco, BottleRock, Bumbershoot and more. They’ve worked with major international brands such as Spotify, Abercrombie, Levi’s, GM, Dunkin’ Donuts, VW and Verizon and continue to spread their message of positivity not only through their music but through their work with charities such as Heal The Bay, Happy Bottoms and the International Rescue Committee. The Mowgli’s will be playing songs from American Feelings on their co-headlining tour with Jukebox the Ghost this month.

KEEP UP WITH THE MOWGLI’S: