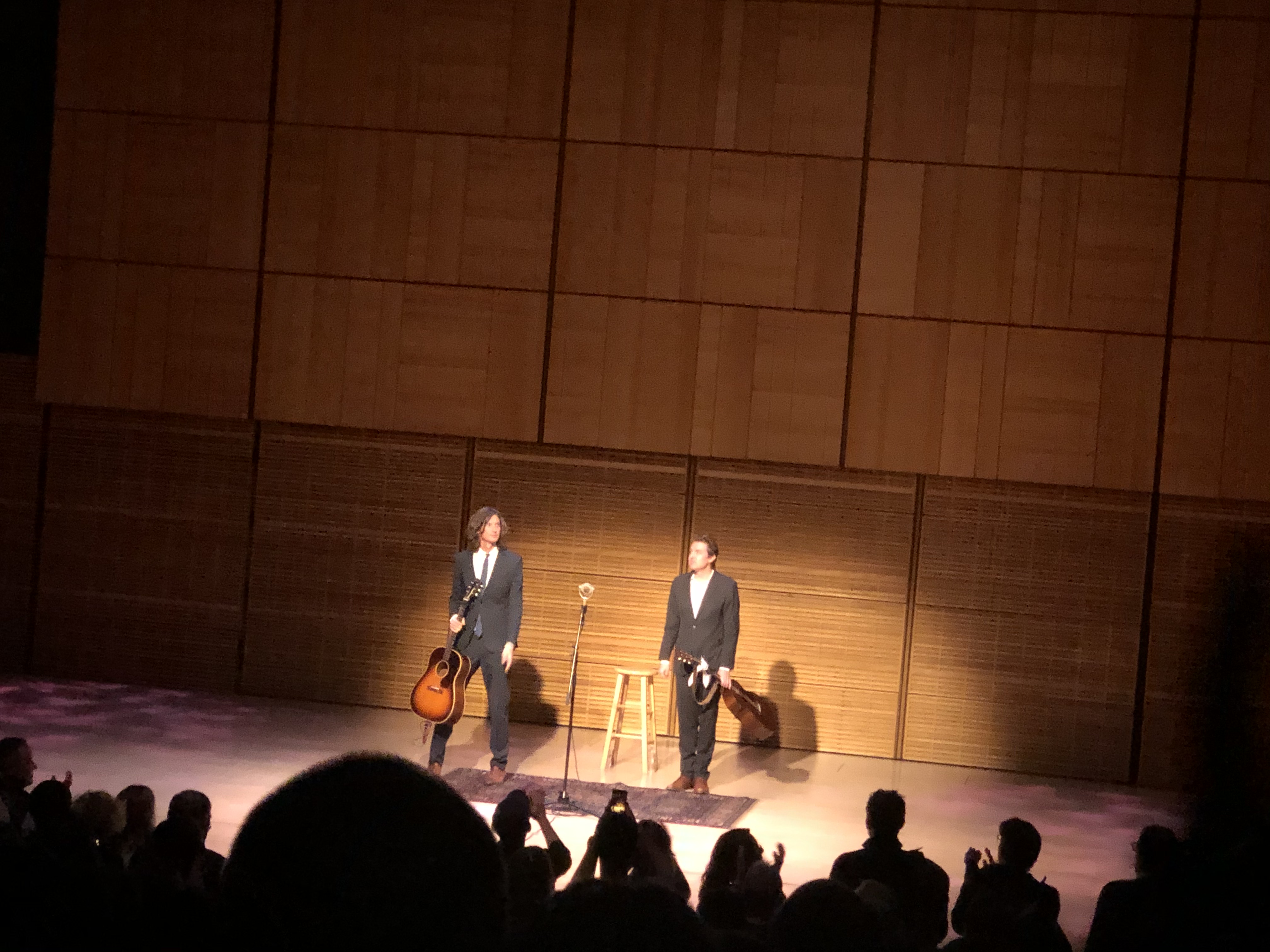 “‘This is really a lifelong dream for us come true,” Joey Ryan said two soft, sweet, close harmony, sad songs into the old school folkies The Milk Carton Kids performance at Zankel Hall, Friday night (11-1-19 for those of you in the future, a joke I stole from here), “Carnegie Hall is just upstairs.” It’s a funny line, and it also put the just plain wonderful duo at the epicenter of their sound and vision, heart break followed by extremely funny banter. Joey looks like a very tall Robin Gibb meets a not so cute Hugh Grant -he has the better voice and does most of the talking. “We have time for one more song…” his partner in sound claimed after an extended introduction to the evening. The partner is Kenneth Pattengale, he resembles a last chance lightweight who couldn’t have been a contender, the better guitarist, he can finger pick a folk meets bluegrass melody on his 1954 Martin 0-15 like nobody’s business.

Kidding aside, the LA based duo clearly considered the evening an important event. Joey’s parents were there, as were his two children. If that wasn’t enough, they actually set up a mini tour, “Very Small Venues, Very Low Ticket Prices”, around this, the first concert of the fourth season of American Byways, programmed by Rosanne Cash. Zankel Hall, a 500 seater, offered one of those two options and it was nearly perfect. If they had dropped “Memoirs Of An Owned Dog” for “Girls, Gather ‘Round,” and if they had performed for 120 minutes instead of 90 (tops), the duo would have been as thrilling as two men who barely move on stage can possibly be. They are no Everly Brothers (the moral equivalent of saying Obama is no Lincoln) but they take from Don and Phil, a little for Simon and Garfunkel as well, add themselves, and remain absolutely true to a vision.

After a vote on their website for favorite songs, the Milk Carton Kids found themselves with a setlist that leaned heavy on their debut album, Retrospective (funny, right?) and their latest album, the impeccable The Only Ones; we got “Maybe It’s Time” (not that one)  followed by an unmiked “The Only Ones”. It wasn’t whiplash by any means, but they are definitely better songwriters today.  Just one song off their full band 2018 disappointing All the Things That I Did and All the Things That I Didn’t Do and one song off their breakthrough The Ash & The Clay, still with the seven song, 28 minute masterwork just released (an album so strong I had to purchase a ticket off the secondary market to catch the well sold out show), nothing was missed, every song was a diamond of artistic precision, every one of Kenneth’s finger picked solos stopped the show, every joke hit with expert timing, every feeling rang true.

The Milk Carton Kids sing songs of mostly all American love and desperation, quiet, tender, full to the brim of humanity. “My Name Is Ana,” a new one played on Friday, is about Anne Frank -not a tribute to, but about, it imagines they are her. Just before that we got “Secret Of The Stars,” introduced by a long set up where they can walk or play guitar but not both at the same time, and the song is a gorgeous finding of God amongst a loved one: together they were extended studies of the appearance and then the absence of God, and one of the reasons the duo are so well loved: they brim over with intelligence. The show wasn’t a victory lap, it was more like an accounting for the reasons they were there at all.

It has been a strange couple of years for the duo, which found 35 year old Ken going off the road to battle cancer and succeeding: “They got the thyroid out and while they couldn’t do anything about me being an asshole, they did get the cancer.” The result was the friends (in a banter that failed to bant, Ken rebutted Joey’s claim that he was an absentee father with “You see your kids more than most do”). The result was a more is less tour with a full band in 2018, they went from filming “Rope” to filming “High Anxiety’ (yeah, I know, but it will have to do for now) and the two microphones for the guitar, one microphones for the voices EP, album… They followed “My Name Is Ana” with possibly their best song “I Don’t Want To Fight Anymore” and then… well, you get the concept (all right: “As The Moon Starts Tonight”) and then, I know, I know, but ‘HONEY, HONEY” with Kenneth’s most inspired piece of finger picking…

They leave “New York” for the encore but while Boston AT CHEAPER PRICES got a four song encore, we had to settle for two.  “We work just like anybody else, 70-80 days a year, 90 minutes a day,” Joey cracked. In the end, the briefness of the set is my only real beef with the sublime evening of sad songs by happy people. “So you don’t think this is empty pandering, New York City is literally our favorite place in the world to play since we started”. That ain’t pandering at all, that’s what great bands realize.