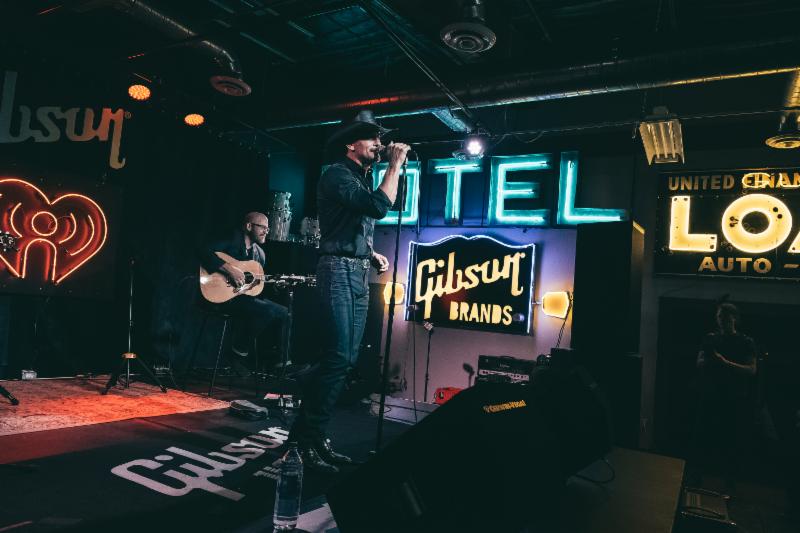 GIBSON blazed through SXSW Music Week in Austin last week showcasing artists from its past and its future era.

On Tuesday, the GIBSON experience at SXSW kicked-off with Hail Hail Rock N’ Roll: A Tribute to Chuck Berry. Fans and music enthusiasts packed into the GIBSON showroom in Austin to view the first-ever Gibson Chuck Berry 1955 ES 350T guitar—the first-ever collaboration with the rock n’ roll pioneer’s family–and enjoy a special demo of the guitar with a performance of chuck’s classic songs from his son Charles Berry Jr., his grandsons Charlie Berry III and Jahi Eskridge. Songbirds Guitar Museum provided a selection of rare and valuable Gibson vintage guitars for visiting artists and fans to view and play including Chuck Berry’s own Gibson ES 355 guitar.

On Wednesday, Gibson President and CEO, James “JC” Curleigh delivered a powerful featured talk at SXSW to a packed industry crowd at the Austin Convention Center. Titled “Now What? Setting the Gibson Stage as the 125-Year-Old Start-up,” JC took a deep dive into the bright future of Gibson as the pre-eminent American-made instrument brand has emerged revitalized, re-envisioned, and recharged to its core mission, paying homage to its storied history as it embraces the next vanguard of musicians independent of generation, gender and genre. According to artists, guitar shops and fans around the world Gibson has been synonymous with creating, shaping, and owning sound for the past 125 years and is now ready for next century.

For more information on GIBSON, visit:

Gibson Brands, the world’s most iconic guitar brand, has shaped the sounds of generations of musicians and music lovers across genres for more than 100 years. Founded in 1894 and headquartered in Nashville, TN, Gibson Brands has a legacy of world-class craftsmanship, legendary music partnerships and progressive product evolution that is unrivaled among musical instrument companies. The Gibson Brands portfolio includes Gibson, the number one guitar brand, as well as many of the most beloved and recognizable music brands, including Epiphone, Kramer, Steinberger and Gibson Pro Audio division brands Cerwin Vega, KRK Systems and Stanton. Gibson Brands is dedicated to quality, innovation and sound excellence so that music lovers for generations to come will continue to experience music shaped by Gibson Brands. Learn more at http://www.gibson.com and follow us onTwitter, Facebook and Instagram.