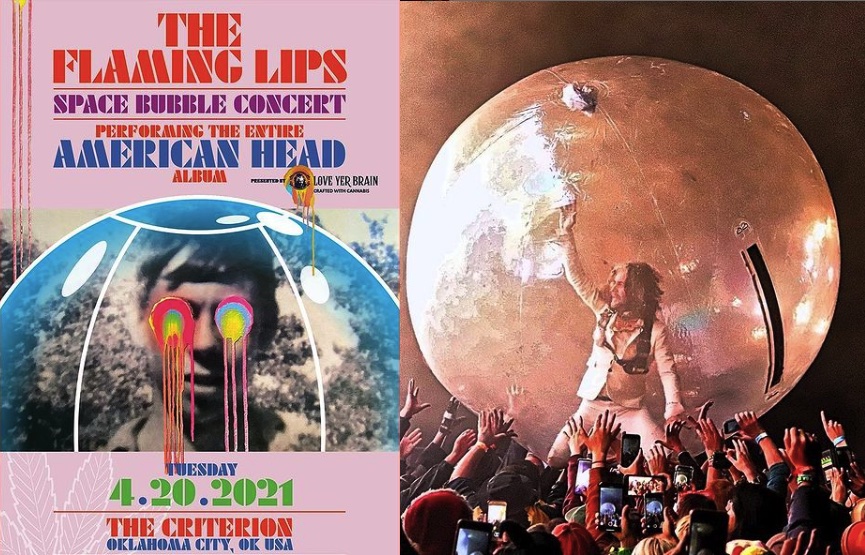 We can be certain that the Flaming Lips have been the only band actually playing safe concerts during the pandemic. Thanks to their famous giant bubbles, inspired by frontman Wayne Coyne’s popular stunt, they have been able to play COVID-19-safe concerts in their hometown, Oklahoma City. Since January, a few happy people have been attending a few Lips concerts, nicknamed ‘the New Space Bubble Shows,’ inside the safe space of these plastic inflatable spheres, while the balloons released during the shows have switched from the usual love and positive messages to ‘Fuck You COVID19.’

Today, Wayne Coyne has announced a new Space Bubble show scheduled for 4/20, once again in Oklahoma City, and not only the band will be performing their 2020 album, ‘American Head,’ in its entirety but the Flaming Lips will premiere their own line of Cannabis edible. This is what Wayne announced on his Instagram page:

‘Yessss!!!! New Space Bubble concert announcement… We (The Flaming Lips) will be performing the entire. American Head album on 4/20… tickets go on sale this Friday morning at 10:00 am Oklahoma time… it will, again, be at @criterionokc … we are adding 29 MORE bubbles up in the balcony (around the edge of the balcony) please come if you can!! Gonna be so cool playing the entire album front to back❤️?❤️?❤️this show also introduces our new Cannabis Products Line … YAY!! ???it’s called Love Yer Brain!!! Yesss!!! For creative humans… ❤️??’

The brain-shaped gummy edibles will arrive in 100mg and 250mg packs, with watermelon, green apple, and raspberry flavors. Meanwhile, I realized a few weeks ago that their show at the Wiltern in Los Angeles had been rescheduled for August, 20th 2021. This may look a bit too hopeful since concerts have not resumed yet in California, but who knows? I bought a ticket for the show a long time ago and I still have the ticket, so I tagged the Lips on social media, proposing a bubble concert if it’s still unsafe to play such a show at this date. Wayne Coyne was cool enough to stop by and answered ‘We will seeeee…’

This sounds so good after a year in lockdown. The Flaming Lips concerts are so celebratory that I certainly wouldn’t mind it being my first post-COVID show.