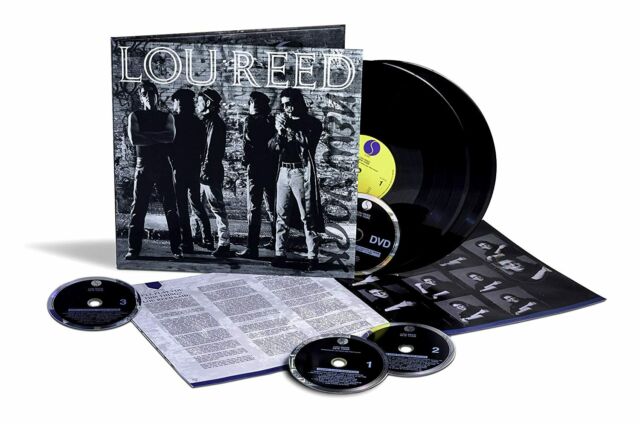 My favorite Lou Reed was circa New York, the 1989, guitar based snapshot politics of the city in dismay, featuring Mike Rathke on guitar and drummer Fred Maher, surely responsible for the entirely, oddly ringing sound all over it. I caught Lou at the St. James and it was the best time I’ve ever seen. Lou’s best album? Sure, why not. The 42 track remaster is superb,  first album the original plus a couple of outliers,the second  live tracks from the tour (but not from the Broadway shows), and the final odds and sods, demos, rough mixes, like that. The album remains as vital as ever (Grade: A+). The 92 song super deluxe Sign O’ The Times will take some time to unpack though just about everything I’ve heard so far is quite as great as you thought it would be…  before you go in search take a shallow dip in the Miles Davis featured “Can I Play With U” (Grade: A+). I reviewed the new Public Enemy earlier (here), it isn’t He Got Game  but it ain’t bad (Grade: B).

Over at singles, rap and hip hop arty types meetup on Travis Scott’s excellent “FRANCHISE,” a white tee hook track, with M.I.A. having her second great performance of the year and the entire sound a cut and paste throbber of a rocker, catch the video by the way, filmed at Michael Jordan’s mansion (Grade: B+). Still listening to rap, YG is as angry as ever and the piano based “Out On Bail” as he channels 2Pac and remember when he was out on bail (Grade: B). “Ghosts” is what we are expecting from Bruce Springsteen, while hoping he had something better: a guitar rocker echoing through past E Street Band: it’s not bad but it is near beer music, sounds like the original without the punch and the guitar-vocal hook is borderline parody (Grade: B). Former Vampire Weekend Rostam returns with a lovely and worthy acoustic guitar and minimalist with a gorgeous mystic flute on the break on “Half-Light (Acoustic)” (Grade: B+). More acoustic music, Kurt Vile is joined by John Prine for a sweet piece of folk Americana on “How Lucky” (Grade: B) and The Shins continue not to change your life with “The Great Divide” -an arty thing that seems to still not reclaim the Mercer touch (Grade: C+). Sia has another song from another movie with “Courage To Change,” a disappointing MOR tech ballad (Grade: C), Zayn has had a big week, his partner Gigi Hadid just had a daughter and “Better” is a low key and lovely electronic ballad (Grade: B+).

Back to albums, Bob Mould continues to do what he has done for years, edgy rock and roll with a high melodic quota, on Blue Hearts (Grade: B), the pastoral and elegant new Fleet Foxes album searches for a calmness in all the turmoil and finds it only musically on Shore (Grade: B). Finally, I had my eyes out for Southside Demos  last week and still managed to miss Texas returning to their breakthrough album on a terrific seven songs of demos from the original sessions (Grade: A-)

What You Gonna Do When The Grid Goes Down? – Public Enemy – B

The Great Divide – The Shins – B