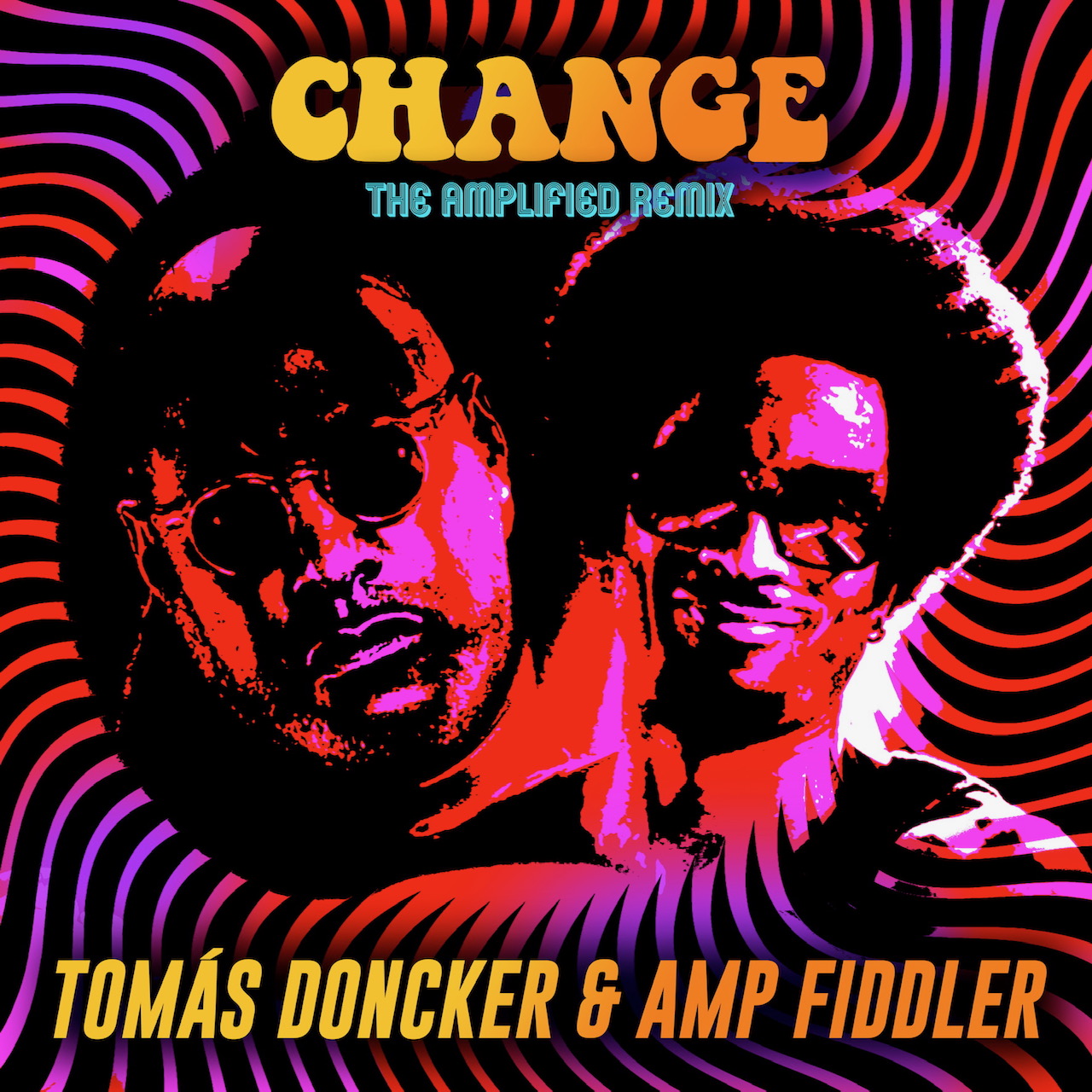 Is there a funkier record company than True Groove? When Tomas Doncker is in the zone he lives up to the Funkadelic allegiance: “dey funk, well dey funk, today funk,” and on True Groove’ second allegiance he colorations and switches what it means to be a black artist -with no barriers but the limits of his imagination, as to what it all really means. Yesterday , True Groove dropped Regina Bonelli’s cover of “Didn’t I” (full review here) a soulful Memphis-y vision of former pimp Darondo’s strangely intimidating pop hit (Grade: A-). Today, Tomas Doncker joins  with Amp Fiddler, the keyboardist who took over from Bernie Worrell for twelve years of P-Funk, and who three years ago dropped an ace solo album.On “Change” the duo find a groove and keep to it from Doncker’s  opening “well… yeah… wait a minute” growl with Amp singing back-up, they lay down the “change is coming” variant. It’s great and the Amplified Soul Remix is better, it makes complete sense of Doncker’s post-modern blues vibe as it follows Amp’s swirling keyboard in a psychedelic intensity on an all out jam that is nearly six minutes in length and should be three times that (Grade: A).

Over at albums, I reviewed Cat Stevens’ blatantly unnecessary Tea for the Tillerman²  (here) and was mildly indifference (Grade: B), Keith Urban widens his palate again and goes one step too far on the modern pop doesn’t go country, THE SPEED OF NOW Part 1, adding Niles Rodgers on one song and P!nk does not Max Martin make you (Grade: C),  Ava Max has been knocking on Dua Lipa’s former Eastern European goes pop in London door since 2018’s “Sweet But Psycho” and I can definitely see the US getting the message on her debut album Heaven & Hell, a business as usual aim for dancing teens (Grade: C+), in the UK they renamed the Scandinavian sadgirl meets Robyn’s debut your girlfriend´s in the bathroom, i´m trying to kiss you, here we called it after her name, Mags, but it remains a pleasant, emotionally valid dance album (Grade: B+).  In the wake of new albums by Toots Hibbert and Buju Banton, nobody is going to consider Ziggy Marley’s new album More Family Time,  with plenty of featured friends, anything special though amazingly enough it may well be, a feature that is simply terrifying on paper, Ben Harper joining on “Play The Sky,” is a lovely and unassuming song, and  Ziggy uses Alanis Morissette on “Please Excuse Me Thank You” for her sweetness not sarcasm, on the pretty good children’s album (Grade: B), it seems as though Alicia Keys isn’t as boring as she once was on Alicia,  she slowly (no surprise there) went from r&b 90s style drag to hip hop produced chill r&b and it suits her (Grade: C+). The former Dirty Projector Angel Deradoorian offers up a boring 50 minutes of art Americana (Grade: C).

Back at singles, Justin Bieber equates loving his wife on “Holy”  with loving God, a  feeling Chance The Rapper absolutely gets on this Gospel-white soul stuff on his clever verse, both of them sound beyond sweet, simple and lovely (Grade: B+). And finally, after holding up his album for months, “Diamond” is another single and the worst so far,  a well sung bore waiting for a Disclosure remix (Grade: C+)

Tea for the Tillerman² – Cat Stevens – B