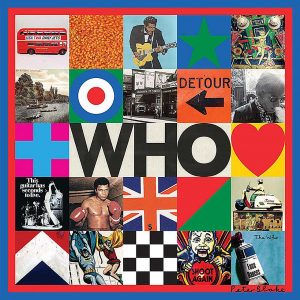 Pete Townshend faces down mortality, and a life’s work, with the Who’s first album in thirteen years, Who, nearly an hour of  the best Whoish heavy rock performed since The Who By Numbers (it’s superior to It’s Hard for certain). Not a Who masterpiece as  such (though some songs are great) it is an artistic statement of immense integrity. Who goes on way too long, starts with a blast, sags in the middle itself, and steadies itself towards the end. But it is a real, album length, triumph as testament to a man who knows how to do it. Plus, Roger Daltrey is in astonishing voice, and while the problem is mostly the performances, it clicks when necessary as Pete contemplates hope I die after I get old (Grade: A-).

Three of the five former One Direction members have new releases, and I get a sneaky suspicion we will be getting a 1D reunion not 2020, maybe 2021. Harry Styles is a rock star for sure, and a charming man, but his third song, “Adore You” off next week’s sophomore release, is the second dog and nothing has charted and -as 1D know, you need great songs to signify and except for “Two Ghosts” and a coupla Zayn’s, none of the band members have much delivered haven’t delivered; “Adore You” is pleasant enough, overwritten soft rock (Grade: C+). Liam Payne makes a pop move onto the charts with generic hip hop dance tracks and mainstream MOR ballads, but with some gems here and there, on his first solo album LP1 (Grade: C+). Niall Horan went the way of Americana on his first album, and on the first single from his upbringing sophomore album, “Put A Little Love On Me” -a lugubrious piano based ballad, he skirts disaster (Grade: C-).

Speaking of generic, the new Camila Cabello album seems to cement “Havana” as an aberration she can’t repeat (I know, I didn’t like “Senorita” myself), On her second album, Romance, Camila coos to the whimpy Shawn Mendes, a romance that seems false as they play it all out in public,  but should certainly help to make the album a huge success. Camila doesn’t have a voice and works on charm offenses manufactured potential hits (yes, that Benny Blanco) and though there are occasional dividends (try “Living Proof”) it is still nothing special (Grade: C+). Speaking of manufactured potential hits, The Chainsmokers EDM duo DJs are back with their third album in three years and while it doesn’t have that three song hits the first one did, it isn’t the dead without a trace second album either. With a handful of potential hits, and featured artists from Sabrina Claudio to blink-182, World War Joy could put em back on top (Grade: B-).

Two Latin pop titans have new albums that ignore the Latin Trap revolution spearheaded by crossover Luis Fonsi and Latino speciality Bad Bunny. Pitbull continues to release effective pop dance Latin pop mostly in English. As stars  from Blake Shelton to Becky G (who deserved a better year than she got) add different hues to Mr. 305’s thoroughly enjoyable dance music Libertad 548 (Grade: B) breaks no new ground but certainly is what it is. While Daddy Yankee played nice with the contenders to his rusting reggaeton crown, Don Omar ignored it entirely on the purest reggaeton sounds out there, the Spanish language The Last Album. Hell, Don Omar’s concept of a featured star is Farruko! The Last Album does its job in a world where nobody does their job (Grade: B-).

On the country scene, Brad Paisley is seriously superior on a single than over an album. Over an album his tricks, tropes, and jokes, grow real stale, on a single they don’t outgrow their usefulness; without a doubt a line like “I ain’t ever gonna lose you, I got ways, I got GPS…” is wittier than anything Luke Combs came out with on his entire last album. “Alive Right Now,” features St. Jude cancer survivor Addie Pratt on the last chorus and she makes a great song even better with a mindblowing chorus that should put her on the frontlines, on Brad’s ode to the cancer treatment hospital  (Grade: A-). On the other hand, always the bridesmaid ever the bride Dustin Lynch, has the twang and has the band on his EP Songs from ‘Tullahoma’, but he doesn’t have that song to cross him pop and never has. Dustin  hasn’t had a pop single hit EVER and it won’t change things here though, personally, I kinda like “Momma’s House” (Grade: B-).

Two T’s to end the early bird special. I am not a Tenacious D fan, and I haven’t much cared for Jack White since Blunderbus, but man “Don’t Blow It Kage” is both amusing with Jack Black going from offense to defense when Jack White asks Kage to form a band with him right now: I love the little riff monster (Grade: A-). The final T is Taylor Swift, with a 50s style arrangement of high style  American Standard before daydreaming herself to the farm she spent her Christmases as a youth (with vintage footage to prove it on the video). I love it, well done Taylor (Grade: B+)

World War Joy – The Chainsmokers – B-

Songs from ‘Tullahoma’ – Dustin Lynch – B-