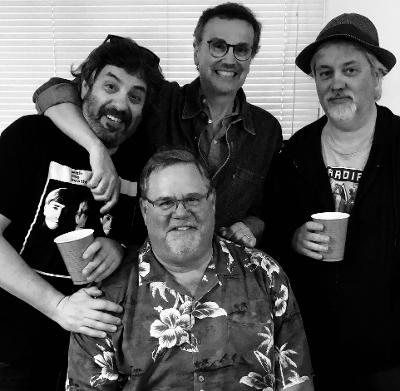 Brando’s Lair is Barry Holdship’s latest band, a power pop quartet from the 1980s local hero with Let’s Talk About Girl’s leader seemingly in complete control of the gifts that made him so far and yet so close to a major breakthrough. Barry is my former and for always Creem editor Bill Holdship’s little brother and in his own way something of a music historian. Brando’s Lair is promising a song a month for a year, tidings of great joy no doubt. of the two we’ve gotten so far, “Stuck In Time” is a masterstroke of harp and pop Americana, such a gorgeous sound (Grade: A), “Here With Me” eschews the Byrds for a mid-60s rocker with a tremendous drummer holding it together by the scruff of its rockabilly lick (Grade: B+).

Still with singles, Chynna died a year ago and her first post-life single, “burnout” is a well rapped dirge there to remind you what was lost (Grade: B+), I am of the firm opinion that Kodak Black is one of the best rappers anywhere, not style, or back story, but voice and flow are amazing always, and the one time I saw him live, at a Tidal gig, he was better than everyone and everyone included Jay Z.. Out of prison, his entourage were attacked, reportedly by Southside (the producer), so support him while you can with a new single “Easter In Miami” -a long rap, tongue twist, state of the Kodak Black (Grade: B+), Prince has risen from the vaults with a 2010 track brooding funk jazz, spoken word verses, bebop (Grade: B).

Over at albums, I reviewed Taylor Swift’s re-recording of her second album, aka Fearless (Taylor’s Version)  earlier today (here) and while I won’t insist that it is necessary, I will insist that of all the unnecessary things it is the most necessary (Grade: A-) , ten years later here is Miguel’s Part 4 of Art Dealer Chic and it is more psychedelic art funk than the first three, to its detriment (Grade: C+), whether you consider Kevin Abstract’s Brockhampton a boy band or an alt rap art band doesn’t matter, they are consistent enough to be at least in the running for best band, and when your featured performers include everyone from Danny Brown to JPEGMAFIA (to Charlie Wilson), and the songs are intensely catchy and unique, you can consider them anything you like (Grade: B+). American folk singer Peggy Seeger was married to the legendary Ewan MacColl and at 85 years of age, her new album The First Farewell, recorded with sons and daughters, is all original material and all quiet, pleasant, light hearted and yet not really (Grade: B+). Rhiannon Giddens and Francisco Turrisi have moved to Ireland and here do folk covers of Irish, Italian, and American sounds (Grade: B-)

Easter in Miami – Kodak Black – B+

The First Farwell – Peggy Seeger – B+