The Earliest Bird: Top Release Shirley Bassey’s “I Owe It All To You” Reviewed 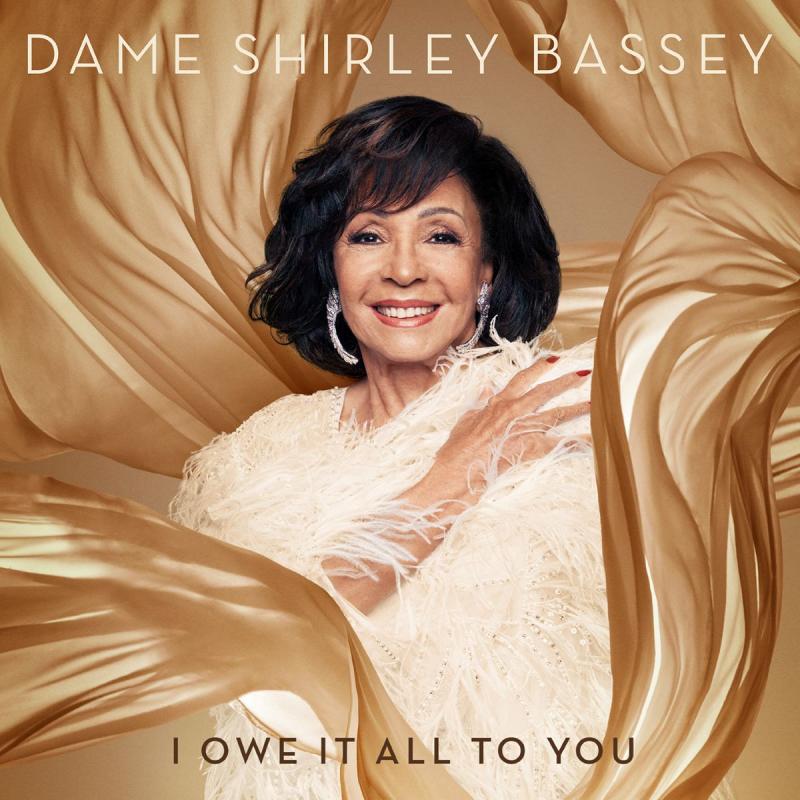 If Janelle Monae really wants a crazy, classic, life, she might want to take direction from Shirley Bassey, the big voiced counterpoint to Welsh compatriot Tom Jones, who gave us “Goldfinger” (Tom got “Thunderball”) and announced that I Owe It All To You will be her final release. The statuesque cabaret singer who was born to a Nigerian father and English mother, born and raised in Wales. She ended her school days at the age of fourteen and got a job at a factory and worked nights and weekends where her big voice drew a steady load of attention till she was on the UK charts at the age of twenty, and a constant presence touring the country. Bassey was named a Dame Commander of the Order of the British Empire. There was controversy, she had a child with actor Peter Finch while still married, there’s a tasty morsel and so far I’ve given you child labor and bigamy…

Bassey was also a popular live on stage  singer, always selling out club (and theatres, and Arenas) around the world, yes, even Vegas and NYC but her recorded catalog is, while awe inspiring (total releases are in the upper 70s), also a little underwhelming. A constant chart topper in the UK through the 1960s, by the 70s she was a lite pop classicist, and by the 80s not a Top Twenty star. In the 1970s she released eleven albums, in the 1980s she released three albums. And in the 2010s one album. Six years after Bassey’s last album we are gifted with her “grand finale” I Owe It All To You -a more or less typical easy listening triumph, with some songs she has had in her live show but never recorded, “You Ain’t Heard Nothing Yet” and “Maybe This Time”,  songs you would expect like “Almost Like Being In Love” and “Smile,” 60s pop like “You Were Always On My Mind”, the new “Look But Don’t Touch” seems to have escaped from her TV variety show.  and a nod to the ever present with Texas Grand Marshall Beyonce’s “I Was Here”, the 4  (to my mind Bey’s third best album, maybe second) closer co-written with The-Dream. “I was Here” concluded  4, and is the penultimate moment on I Owe It All To You.

At the age of 83 (she will be 84 in January), Shirley still has that voice, she is still an attention gathering bellower, and while she can sing soft, and does on her grand finale, she can also let it rip. The album opens with a 41 second  “Overture” and then asks the musical question “Who Wants To Live Forever” as takes her through a slim conceptual escapade, the audience as her lover that she is saying goodbye to, sometimes reminiscing and sometimes asserting, usually she is not swinging it but when the moment arrives she is capable of doing so.

It isn’t that Bassey is bad, it is that it isn’t a very interesting album, the only songs I really want to hear again is the obvious blow out the cobwebs “Almost Like Being In Love” and the conduit to the present day, “I Was Here”. It doesn’t traffic in nostalgia, though when you think that Bassey was a professional entertainer for seventy years, a sense of, why stop now permeates the songs? It has an ease about it, a self awareness as to what she does and how she does it.

Bassey’s farewell is good enough, it doesn’t need to be more.