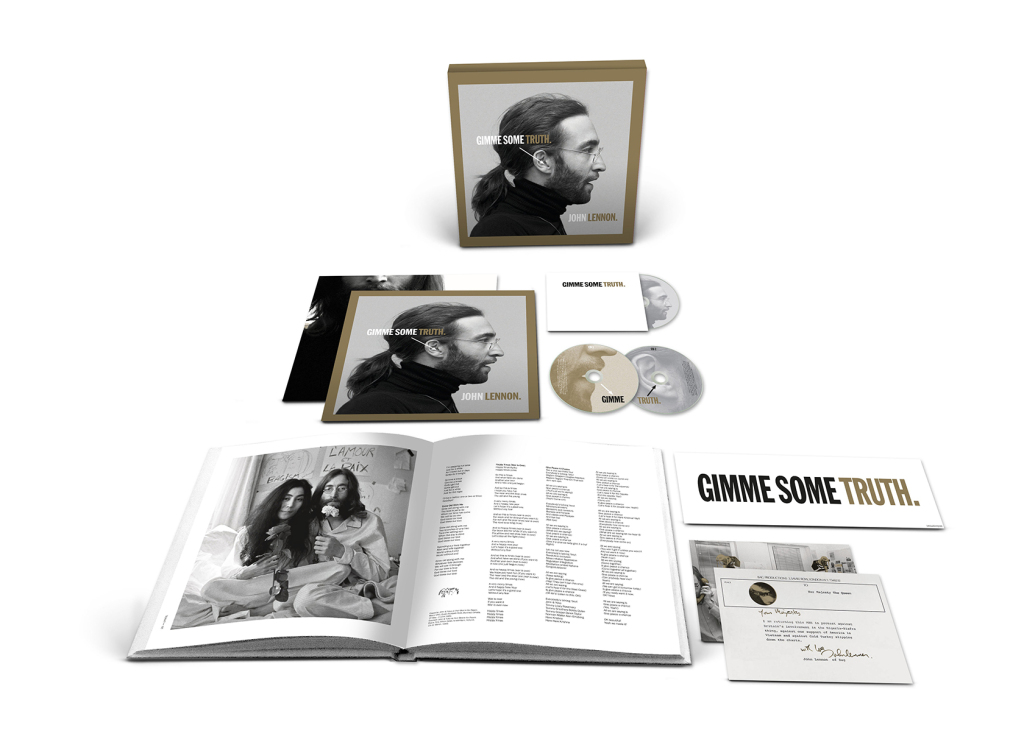 Today, John Lennon would have been eighty years of age. In celebration of his career, Yoko Ono executive produced and Sean Lennon produced, audio engineer Paul Hicks (he has worked with George Martin on the Beatles remastering, as well as the Imagine reboot)  worked on the mixes for Gimme Some Truth. The Ultimate Mixes. I’m a huge Lennon fan but two of the 36 songs, his cover of Rosie And The Originals of “Angel Baby” didn’t make it onto Rock And Roll but appeared on the posthumous Menlove Avenue, and Mind Games “I Know (I Know)”, needed a reminder.

Even if you have not particularly astute ears,  Lennon’s voice has been clearly mixed all the way up and you can hear every tremble, every sneer, and while I don’t see the songs needed any more touch ups, nothing is harmed. The song track listing moves in chronological order through singles “Instant Karma” and “Cold Turkey” through John Lennon/Plastic Ono Band and Imagine, to Menlove Avenue though you can hear where Yoko’s heart lies, Sometime In New York City gets short shrift, and the dripping in irony masterpiece “Nobody Loves You When You’re Down And Out”  off Walls And Bridges which finds Lennon singing his epitaph “Everybody loves you when you’re six foot in the ground” doesn’t show at all… a glaring miss. It ends with the one-two of political up against the wall “Power To The People” and pan-pacifism of “Give Peace A Chance”.

Forty years after John’s murder  while there is no reason not to release these songs, it could have been a better set for sure. If Yoko wanted to highlight her late husband’s voice I can understand why she didn’t include something off the Unfinished Music series, but still, maybe she could have revisited  Life With The Lions (the Yoko miscarries album, and though Yoko sings it “No Bed For John” is as verity as verities ever gets). And, so far removed from Lennon the man, Yoko might have added more than a live “Come Together” from his Beatle years. “You Can’t Do That,” “Help,” “Tomorrow Never Knows” along with “Come Together” would round out a picture. Did we really need six songs off Imagine?  She picks through the catalog with an ear for the vocals, and if the concept is Lennon sings, the second best singer of the rock and roll era deserves to be heard again. But I’d rather “New York City” than “Angela” for sure.

IIn 2020,  the picture no longer needs rounding out, the picture of his recorded career is pretty much set in stone by now, and so even if it could have been different it certainly didn’t need to be. Any excuse to listen to Lennon is better than no excuse to listen to Lennon. Especially on what would have been his 80th birthday. Happy birthday, Johnny.