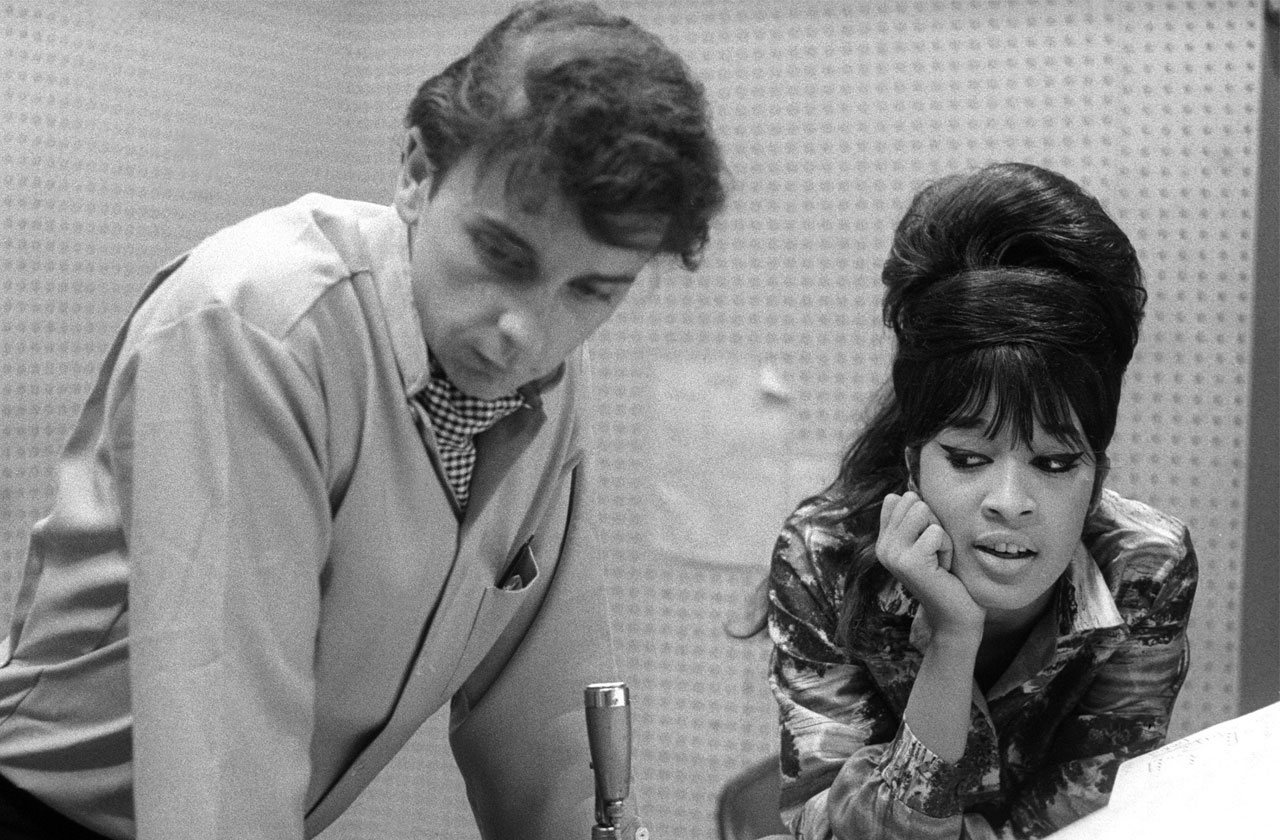 The death of Phil Spector is a difficult one for the debate about the possible separation of the artist from his art. The BBC had first announced the news as ‘Talented but flawed producer Phil Spector dies aged 81,’ but they have now changed their headline to ‘Phil Spector: Pop producer jailed for murder dies at 81’ probably because ‘flawed’ was not reflecting the severity of Spector’s crimes. The Wrecking Crew had to post twice about Spector’s death, and the second time was an apology: ‘We would like to apologize to everyone in regards to the announcement of Phil Spector’s death. No matter how we present it, we would never be able to get it right for everyone. The music will never be forgotten but neither will his horrible crime.’

Everyone knows about Spector’s well-documented megalomania, psychotic and violent behavior, everyone knows how he terrorized collaborators in the studio with guns, how he abused musicians and singers during recording sessions, notably his wife Ronnie Spector, whom he exploited and whose career he tried to destroy. He was a madman, responsible for the famous wall of sound, a multitracking recording technique that changed music forever, he was a sick man, responsible for some of the most iconic recordings of legendary ‘60s girl groups (The Crystals, The Ronettes) and music’s biggest names (The Beatles, Ike, and Tina Turner, Leonard Cohen, The Ramones).

However, Phil Spector’s case is much more complicated than your usual abusive artist dilemma, for the very valid reason that Spector was a murderer. He was arrested in 2003 for killing American actress and fashion model Lana Clarkson who was found dead at his house, with a single gunshot through her mouth. Spector’s driver called 911, he noted Spector with a gun in his hand and saying ‘I think I’ve killed someone.’ However, Spector claimed later on that Clarkson’s death was a suicide and that the shooting happened when she ‘kissed the gun.’ He remained a free man until his trial which started in the Los Angeles Superior Court in March 2007. The first trial ended with a hung jury, but Spector was found ‘guilty of using a firearm in the commission of a crime’ during a second trial which ended on April 13th, 2009. Today, Phil Spector died in prison from complications of COVID-19.

Spector was a terrible human being, but I have never understood why Lana Clarkson’s horrible murder could not have prevented. Why was this man still allowed to carry guns when he had got away with so much during his entire life? It’s not as if there wasn’t a lack of stories of Spector and guns since the ‘60s! During a recording session of ‘Rock ‘n’ Roll’ in 1973, Spector pulled a gun on John Lennon, inches from the former Beatle’s ear. It is also reported that Spector ‘pulled his gun and chased Lennon through the hallways of the studio, screaming threats at another occasion.

When he was recording his 1978 album ‘Death of A Ladies’ Man,’ Phil Spector pointed a gun at Leonard Cohen’s head and told him: ‘Leonard, I love you.’ To what Cohen answered ‘I hope you do, Phil,’ while pushing the gun away.

Blondie’s Debbie Harry also recalled another gun incident when she was invited to Spector’s mansion to discuss a studio collaboration. ‘He pulled a gun,’ Harry recalled. “That notorious thing he does. He stuck it in my boot and went, ‘Bang.’ I thought, ‘Get me outta here. I just wanna go home.’ Why would anyone be carrying a .45 automatic in their home?’ Just this morning, Chris Stein also remembered on Twitter: ‘When we went to Phil Spector’s house in the 70s he came to the door holding a bottle of diet Manischewitz wine in one hand and a presumably loaded 45 automatic in the other. Long story. I thought he was nuts.’

The Ramones also experienced Phil Spector’s mood swings during a recording session of ‘End of the Century’ in 1979. Dee Dee Ramone recalled he was going home one night, and Spector reached for his revolver. ‘You’re not going anywhere,’ he said.

And of course, Spector’s wife Ronnie Spector experienced gun intimidation and much more. She was held as a hostage in his mansion, he tied her up and locked her in the closet. He hid her shoes so she couldn’t walk out on him. He set up his mansion with chain-link fences, barbed wire, and intercoms to prevent her to leave, threatened her to get a hitman to kill her if she left. Her married life with this man is a collection of creepy stories from the gold coffin with a glass top installed in the basement, and the promise that he would kill her and display her corpse if she ever left him, to the pair of twins he ‘offered’ her to adopt for Christmas, as if live children were an acceptable Holidays present. When she escaped and divorced him in 1974, Ronnie said ‘I knew if I didn’t leave at that time, I was going to die there.’

The most surprising part of this story may be the very gracious eulogy that Ronnie Spector posted today after the passing of Spector: ‘Working with Phil Spector was working with the best. So much to love about those days. Falling in love was like a fairytale. The magical music we made was inspired by our love. He was a brilliant producer, but a lousy husband. The music is forever 1939-2021.’

Lousy husband? This looks so tame in comparison to what she went through. Ronnie Spector is one of these persons capable to separate the art from this terrible human being she married.

The Crystals’ lead singer Darlene Love was equally extremely generous when she declared today to Billboard: ‘I don’t feel sorry. I don’t feel grief. It’s really sad that the way he ended his life [was] in prison for killing somebody. I want him to be remembered as this man who changed rock ‘n’ roll.’ Darlene said she never saw Spector with a gun, but she was aware of the insanity: ‘I did go to the studio and they said he did have a gun,’ she recalls. ‘I went back home. He called and said, ‘Where are you?’ I said, ‘I was there an hour ago, but you had a gun and I’m not coming to no studio with you with a gun.’ She also remembers Spector’s mood swings: ‘As great as he was and as great a friendship as we had, you could flip and then I’m not there no more. I didn’t give him a chance to show guns [around] me. A lot of people saw it. I just wasn’t one of them.’

Spector was certainly a frightening man but it is also important to note something often dismissed: in 1974, he suffered a near-fatal head injury during a car accident. After being thrown out of the windshield of his car, he was left with injuries to his head so severe that he probably had brain traumatism/damage. Does this explain his awful behavior? Certainly not as he was already appalling before the accident, but it may have reinforced his behavior: there is a documented correlation between aggressive behavior and traumatic brain injury, especially among football players: ‘Among players with severe Chronic Traumatic Encephalopathy, 85% had signs of dementia, and 89% had behavioral or mood symptoms, or both.’

Besides this, it is highly probable that Spector would have been diagnosed as bipolar today. It’s unclear if he ever was diagnosed but he said the following during an interview with British journalist Mick Brown in 2009, just before he was convicted of murder: ‘I take medicine for schizophrenia, although I’m not schizophrenic. But I have a bipolar personality, that is strange. I have devils inside that fight me. And I’m my own worst enemy.’

To this bipolar picture, you have to add a history of substance abuse, and a long list of life trauma – a depressive father who committed suicide when Phil was just 10, a bullied childhood, and a son, Phillip Spector Jr. who passed away of leukemia at a very young age; with this combination, you have the perfect disaster.

In the end, Phil Spector was a terrible human being, but was he entirely responsible for his actions? ‘I have devils inside that fight me’… He was a sick man and bipolar people have to be treated. But there is also another question: with such a history of violence, abuse, and erratic behavior, why was he still allowed to carry guns in 2003 and be left alone with a woman (Lana Clarkson) he had just met? Why hadn’t people around him tried to report anything? To stop the madness? Did this happen because he was a big-time producer and surrounded by enablers? He pulled the gun on a long list of people and more testimonies from several women were revealed during his trial. I know it was way before the #MeToo movement, but Spector terrorized everyone, men and women. So maybe Spector is not the only person responsible for Lana Clarkson’s death. As for his art, it will live on, of course, and the best way to honor his victims is to continue to listen to ‘Be My Baby.’