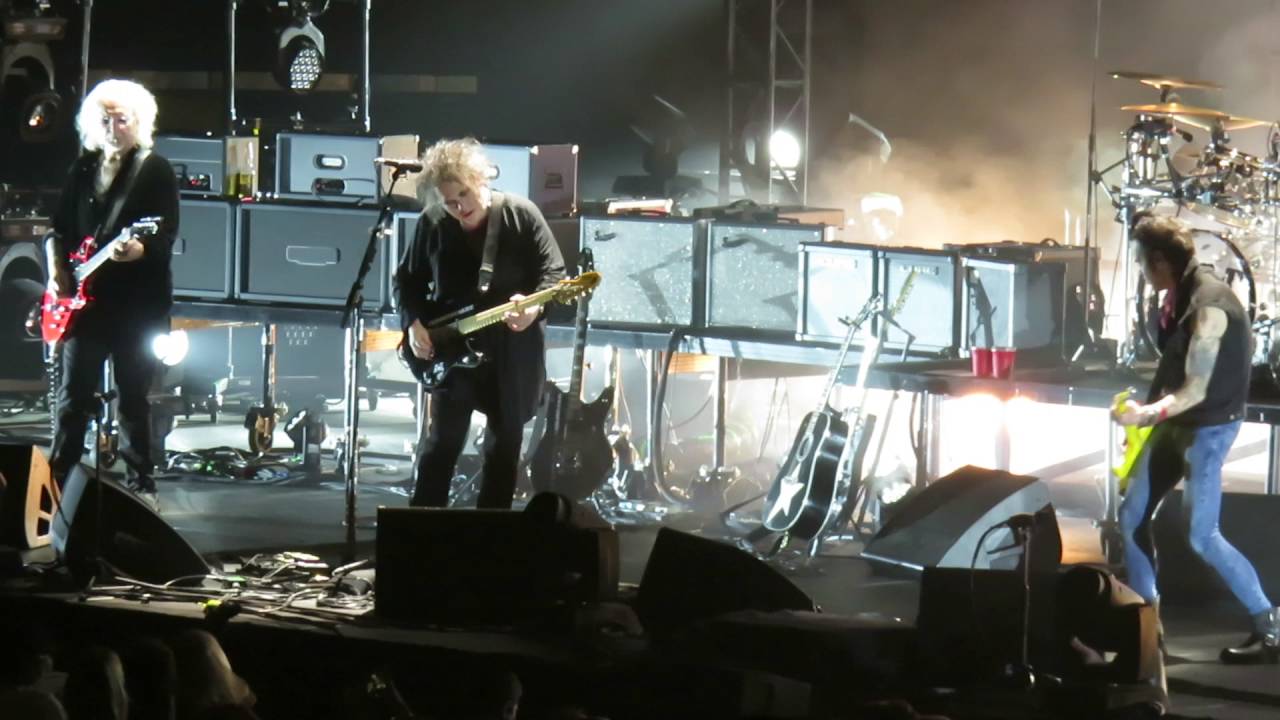 Imagine three hours of mid-set lull deep album tracks and you have more or less the concept behind the Cure’s fanbase pleasing, overlong, yet oddly endearing show playing at an Arena near you, but playing for me last night at Madison Square Garden. Robert Smith, in one of his exceedingly rare comments to the audience, compared it to Sisyphus: A very odd choice indeed, is a setlist really like a huge boulder being pushed up a hill, only to roll back down, for ever and ever?

It is a Smithsian concept, a dark, heartbroken, distillation of a certain sort of failure, but also utilitarian in the extreme. It is almost like saying, “eat the greens and you can have dessert”.  The songs you wanna hear are all at the top of the hill, and we won’t get there for hours. Meanwhile, Robert pushes the set with terrible songs of dark proggy post punk romantic dither like the entire first encore:  a bad new song “It Can Never Be The Same” and a worse old one “At Night”. This was coming after a terrible choice for the end of the set proper, “Bloodflowers”. For the fanatics this must be meat and potatoes: lumbering wails from the heart about  love lost and found over and over again, but on this last of a three night residency, the fanatics seem a little subdued.

In many ways the Cure at MSG were what Robert does, somewhere between art bemusement and useful product. When I interviewed him in the early 80s, Robert was protecting his good name from claims of sellout. “Yes, I am using big amplifiers” he laughed. “I am playing big halls.” This was around the time of Pornography, where Robert had left his post punk pop art behind to concentrate in Goth like brooding songs. It would take another six years before Robert would get the balance between his art pop and his Goth rock right and breakthrough big time with “Just Like Heaven”.

Last night, “Just Like Heaven” was performed relatively early, an hour into the set. Before that he lead his great sounding , rock tremor band of proto-plod hard rockers through a  fine seven song throat clearing before he got to that boulder. Yes, that was Simon Gallup on bass, in much better nick than his old friend Robert, the center of visual attention with a pompadour and a denim vest, looking  just like buddy Joe Strummer. How did that happen? Simon was a moving target, a dynamo compared to the rest of the band, standing on speakers, duck walking. Reeves Gabrel is a terrific guitarist and a legend (big time pal of David Bowie, as I am sure you are aware), and he does most of the heavy lifting here, but a muso, a concentrated force, who even while trading licks with Smith has a diffidence to him.

It is really left to Smith to front the band, and he less fronts and more directs, emoting through some pretty rough material. It is simple, when Smith is going pop he recycles his “Boys Don’t cry” lick, when he is going prog, he performs post-punk drone riffs -glum and repetitious. On stage, they both work, or would do if he shook em up a little. The first seven songs, a terrific “Out Of The World” all the way to an even better “In Between Days”  were fine and then suddenly come the Sisyphus warning signs and the dire “We don’t play this very often…” abandon hope all ye who enter here doomsday prophecy. It’s easy, it means it is either a fan favorite the band have grown out of, or it is a band favorite nobody else likes. This was the latter. And so began a downward spiral not saved even by a bizarrely rushed “Just Like Heaven”. That’s right, sucker, hurry the only song we want to hear.

There were four encores, which, really doesn’t make em encores at all, does it? It is really the Sisyphus concept come to life, starting with painful prog excursions, to less painful prog excursions, to hard rockers, to pop moves like “Let’s Go To Bed” and closer “Boys Don’t Cry”. But as 32 songs retros go, where was “Mint car”? “Killing An Arab”? “Jumping Someone Else’s Train”? Why ten minutes of the painful “Bloodflowers”? Doesn’t he love us? Those last three songs before the encore should go down in Cure infamy, “Trust”, “39” and “Bloodflowers” are agonizingly horrible. According to the New York Times his band has an astounding 97 songs rehearsed, and 25 of these ones should have been something else.

And yet… the band sounded great, Robert was in fine voice, and while the audience weren’t all over him, they weren’t asleep either. The sound was so good, it was like razor cutting guitars plus shaded keyboards. And while the drums were beatkeepers, there wasn’t anything approaching a groove, it was steady as opposed to sleepy.

I haven’t been a Cure fan in decades, and this was not the show for the non-fan. he should have cut it to two hours and thrown out all, or most of, the fat. But it was a true concert achievement, a real study of what Smith does, if I don’t like what he did I shouldn’t have gone. As for Robert? The boulder just rolled down to the bottom again.