The Concert And The Tee Shirt To Prove It: Eminem

Iman Lababedi|May 28, 2020
Live, Slideshow, The Concert And The Tee Shirt To Prove It
Eminem 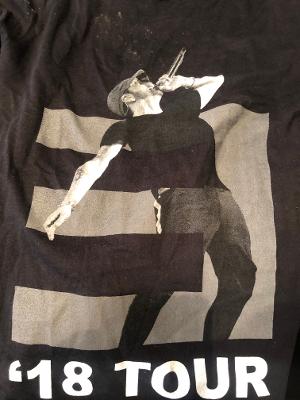 So… how bad was he? I caught him as the headliner of Governors Ball in 2018, maybe the fourth time I’ve seen Eminem in person, and he was stuck flogging a shitty album called Kamikaze, where he failed to turn Jessie Reyez into Rihanna despite two attempts., and failed to do a good job at Governors Ball on 2018 four years after killing it at Yankee Stadium (here).

The problem with the Gov Ball gig was two fold, one) you couldn’t see anything even from VIP and two) obsessed with the album, he played it all hit and left his hits to medleys.

“The word is that the Em and Ree show at MetLife in 2014 wasn’t up to much, I, myself, thought it was terrific and by the second song, “Square Dance” -that shout of “peeepol,” always gets to me, I was ready for a repeat, he cut out after the first verse. He did the same crap with “Kill You”. And so it went, Eminem was in great voice, rapping simply world class, but his new stuff doesn’t cut it and he only gave us tasters of the hits. That, and the fact that if I really wanted to review it I shoulda stayed home and streamed it, left me as cold as the weather. And, during a weekend without many guests anywhere, he brought out 50 Cents?”

Let’s be honest, Eminem hasn’t been into touring in the 10s, a handful of huge gigs and out. It certainly showed at Gov Ball though… nice tee shirt…