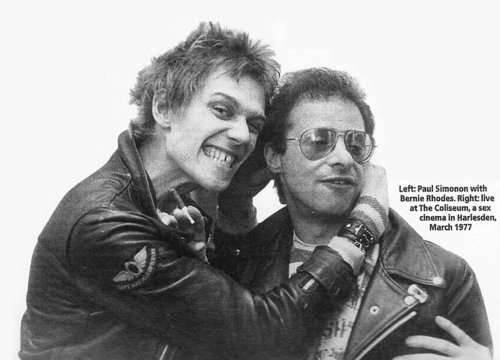 When the Clash were first emerging from Malcolm Mclaren’s “Sex” boutique in Chelsea, Vivienne Westwood’s aide de camp Bernie Rhodes would regale listeners by spinning his favorite song: “Theme From The Monkees” and in a thunderclap of inspiration what the Clash were became clear: not revolution, but bubblegum rock. Bernie was raised in orphanages and on the streets of London, he was what punk claimed to be(while actually a variant on art rock), the revenge of the guttersnipe. Bernie added hooks to teeny bop riots. It’s Malcolm’s fault. Malcolm who forced Bernie’s hand by refusing to allow him to co-manage the Sex Pistols.

It was Bernie who arranged Johnny Rotten’s audition at Sex, it was Bernie who introduced Mick Jones and Paul Simonon to Joe Strummer, it was Bernie  who had the vision of a punk rock so captivatingly great sounding it could ride past the Pistols all the way to the USA.

In 1977, the Clash released their eponymous debut in the UK, in 1979, tailing after Give Em Enough Rope, they released the US version. In 1977 the Clash were second on the line-up for the terrifying Anarchy In The UK Tour, and, in January 1980 (winter is a celebrated dumping ground for no chance album), released London Calling.

The Clash were, in their own way, as manufactured as the Monkees, taking off the zips and leather, they were, in fact, a positioned to take on the Pistols in Punk Rock, less The Couturier Situationists and more dub plus Tommy Boyce and Bobby Hart, – stick like glue, fast, loud pop glam. In 1977, Joe Strummer (nee: John Mellor)  was twenty-five years old (Johnny Rotten was 22), what had this to do with teenagers who’d never get a job? And what do we care?

I don’t care… people fool  themselves in anyway they wish, and, like the Monkees, the Clash  began to believe in themselves, and lead by Joe Strummer, they made a serious attempt to change  not the world, but the relationship between artist and audience. It wasn’t true, but they made a lot of kids going nowhere believe they too could do it as well, they could be the Clash. The band danced on the dividing line between us and them and them and them.

That first album was the future of pop in 1977, it didn’t last but it was sure one shiny moment, and unlike the pub and prog of the early 70s, and just like the Pistols, it was a singles art form first and it took on the UK single by single. In a rush, they went “White Riot,” “Remote Control,” “Complete Control,” “Clash City Rockers,”(White Man) In Hammersmith Palais”… a great string of hits, not the Supremes sure, but pretty damn impressive and then… “Tommy Gun” and just like that, they stopped mattering. By 1979, punk as art as teen revolution was dead and it became something else again, and what it became wasn’t that important and that is where the Clash’s inauthenticity bit them hard. Bernie made em into international pop stars and Strummer and Jones lost the secret ingredient, and while they weren’t bad, they weren’t what people wanted them to be.

Let’s look at the albums:

In 1976. the majority of teenagers in the UK would never have a job, Strummer and Jones captured the socialist paradise not postponed, in a manufactured, media mirrored dreamscape of nihilism…

To remain in 1977, the kick against the Clash -authentic or fakes, political situationists and liars or the voice of the people, whatever they were, they were great. And if Bernie Rhodes job was to get em signed to a major, of course it was. Plus, hell, at least they had a vision of bubblegum Bobby Fuller rock and roll as firebomb and everything they did, headed by their Monkees tribute, “Clash City Rockers,” resonated with their audience. In retrospect, the Pistols “no future in England dreaming” was a deeper, less prosaic version than the Clash’s new religion-television axis. Those songs, that first and second batch, were very important while being entirely built for a reason. Cynicism was the least of the Clash’s problems…

The difference between 1978 and 1977 is that Strummer and Jones lost some of their mojo, sure “Stay Free” is one of Mick’s greatest moments, “Guns On The Roof” (about when they got arrested for shooting pigeons) is a disgrace as a song and as a point of view, “All The Young Punks (New Boots And Contracts)” is the height of hypocrisy, “Tommy Gunn” is second tier 1977, “Safe European Home” is great… and as a single-minded piece of agitprop it doesn’t work. Preferring Give ‘Em Enough Rope to The Clash is like preferring yoghurt to ice-cream. The only band that mattered had failed to maintain it over even two albums.

Meanwhile… you can take the streets out of the rock star but you can’t make Joe Strummer into John Lennon… the Clash, always vastly bigger in the States than the irascible Sex Pistols, in January 1980, they released London Calling and cemented their position as resident good guys by selling the double at the price of a single… The band’s most beloved album was also their trickiest, how do they keep true to their, initially feigned, political radicalism and still be the biggest band in the world?

In 1980, Strummer and band were being bombarded with information, “We have friends and they tell us stuff” is how Paul put it to me (the only band that natters). In 1982, they responded with the clearly received but no less important take on South America via World music Sandinista! One of my favorite albums (not best) by anyone, “The Magnificent Seven” is a signpost they blew up with Combat Rock, and destroyed with Cut The Crap, while Joe couldn’t figure out who to lash out at next. The Clash didn’t explode, they were fired by Joe. He jumped off the deep end and it would take him years to get back on track, though once he did it lead him to the Saint Joe of legend… the Saint Joe after the Clash.

The Clash’s problem was they couldn’t maintain the early genius and they were forced into being stuck between rock stardom and socialist stalwarts, the two were a tough mesh -Pete Seeger managed it, John Lennon less so. But once he left The Clash and steadied himself Joe did it, he became the man he wanted to be.

However, this is about the Clash being overrated.

The band’s position is one of the biggest rock bands of all times, just a little below the Stones and the Who but certain admired more than the Faces, the Sex Pistols, any of those 80s hardcore bands, or 90s Britrockers. Bigger than Nirvana.

But the catalog just doesn’t justify it.

There is an early period and a late period but no real mid-period, the politics while not inaccurate are obvious, they don’t live up to their self-regard (read Lester Bang’s Creem interview), and if the answer is “no one else has ever tried”, so what? And what they are unwilling to do themselves, they have Bernie dirty his hands, so even they didn’t really try. More than a pose, it was also only a pose. .

The Clash have three huge problems as far as an accurate assessment of their career is concerned:

2 – The politics (both personal and social) sputters to a halt.

3 – And they are still and always manufactured in a manner that, say, Radiohead and Pink Floyd were not.

Sure, we love them but we lie about them. The Clash are overrated.