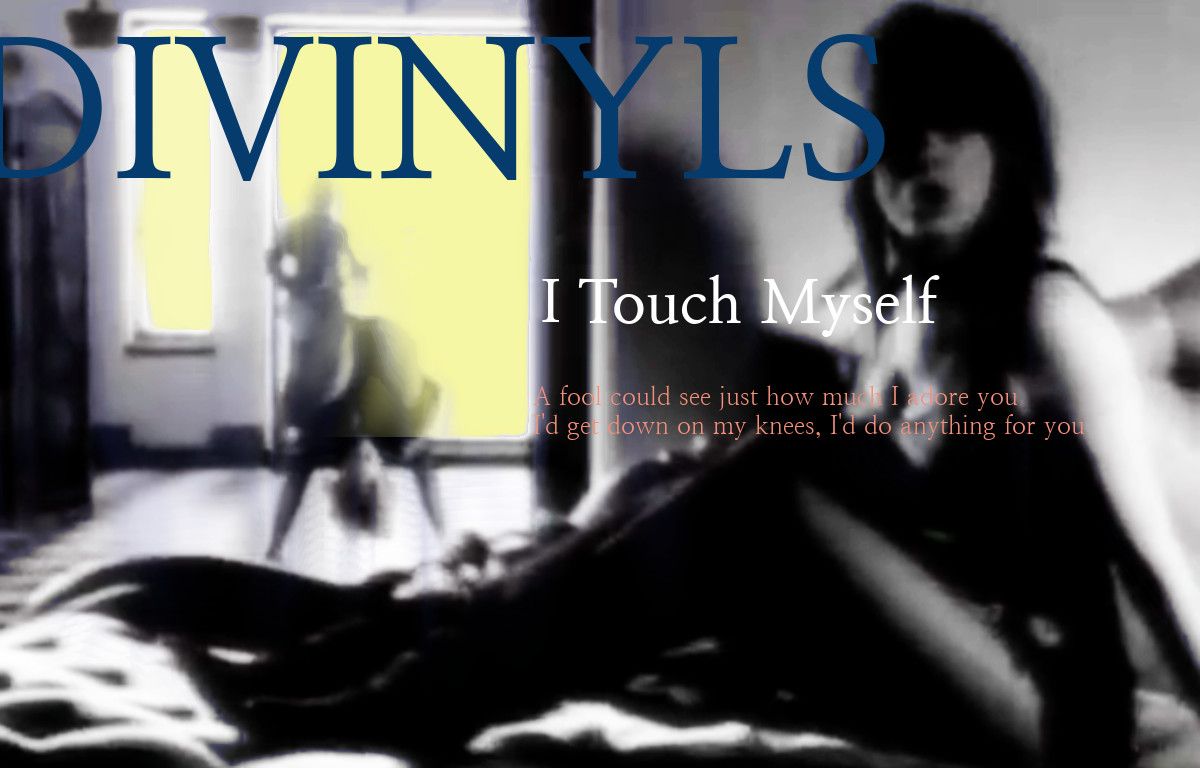 90. “A Long December,” Counting Crows. Songwriters: David Bryson, Adam Duritz, Charlie Gillingham, Matt Malley, Ben Mize, Dan Vickrey; #6 pop; 1996. The somber ballad “A Long December” is about coping with and overcoming loss, recovering from romantic heartbreak and beginning to see the light. Adam Duritz, “It’s a song about looking back on your life and seeing changes happening and for once me, looking forward and thinking, ‘Ya know, things are gonna change for the better’ – ‘maybe this year will be better than the last.’” Stephen Thomas Erlewine, “When (Counting Crows) scale back their ambitions to simple folk rock, like the single ‘A Long December,’ they are at their most articulate.” One of the most melancholy songs in pop music history.

89. “I Touch Myself,” Divinyls. Songwriters: Christina Amphlett, Tom Kelly, Mark McEntee, Billy Steinberg; #4 pop; 1990. There have been plenty of songs about sexual self-gratification, but “I Touch Myself” is the most direct one to have become a major pop hit (I’m sure that many pop fans still don’t know what Cyndi Lauper was really singing about on “She Bop”). Author Van Badham in 2014, “Though we now live in an era where masturbation has been liberated from the desperate teen confessions of a Dolly Doctor sealed-section to socially sanctioned good clean fun, in 1990 ‘I Touch Myself’ was truly shocking. Opening lines ‘I love myself, I want you to love me’ may now be the silent subtitle of infinite relationship seminars, but at the time that Christina Amphlett’s short-breathed yearning ascended the music charts worldwide, a Texas venue literally pulled the plug on their sound system rather than allow her to reach a vocal climax.” Amphlett, who passed away in 2013, brought a punk spirit to mainstream pop music with a combination of winking humor and innate toughness.

88. “Things,” Paul Westerberg. Songwriter: Paul Westerberg; Did Not Chart; 1993. “Things” uses the old songwriter trick of matching a bopping tune with a slice you to the bone lyric. In this case, Westerberg sums up a breakup with, “Things I’d never tell you/Down the line someday/You’ll be a song I sing/A thing I give away.” Westerberg, “’Things’ is one of the songs I had to coax myself into putting on the (1993 ’14 Songs’) album. I didn’t want any of that confessional stuff. It’s sort of a summation of my life. I feel like I’m always leaving something. It could be looked upon as my relationship with people or my relationship with the band. It’s a way of saying, ‘I don’t belong to you. I belong to what I do.’ My marriage is over, so there’s undeniable threads there.”

87. “Angels Don’t Fly,” George Jones. Songwriters: John R Fountain; William J. Webb; Did Not Chart; 1991. George Jones signed with MCA Records in 1991 and producer Kyle Lehning, who was on a hot streak working with Randy Travis, spent nine months recording the “And Along Came Jones” album. Despite the renewed corporate investment, radio wasn’t interested and the first single (“You Couldn’t Get the Picture”) stalled at #32 on the country charts. Two successive singles fared even worse. Still, the real gem is the album cut “Angels Don’t Fly,” where Jones revisits the theme of being unable to cope with his loneliness when his woman leaves – the tag line is “Angels don’t fly, they just walk out the door.” Jone was at his best singing at his tortoise paced, savor every note tempo.

86. “Lonesome Town,” Paul McCartney. Songwriter: Baker Knight; Did Not Chart; 1999. Following the death of Linda McCartney in 1998, Paul McCartney recorded his “Run Devil Run” album, which consisted primarily of songs from the 1950s. McCartney pushes his vocal range to the limit on “Lonesome Town,” a broken-hearted tale popularized by Ricky Nelson in 1958. Rock critic Jim Beviglia, “Paul’s best decision on this classic ballad made famous by Rick Nelson was to sing it in a high register throughout. Whereas Nelson’s version is brilliant for all that it holds back, Macca’s take succeeds in a different way, spilling everything on the table. (Plus the original didn’t have a top-notch David Gilmour guitar solo in its favor.) I’m not one to jump to conclusions and say that he was thinking about Linda while he sang so emotionally here, but it’s certainly tempting to connect those dots. In any case, it’s a wonderful combination of songwriting perfection and interpretive feeling. And all of us who’ve ever been denizens of that figurative location can relate and wallow right along with him.”

85. “The Humpty Dance,” Digital Underground. Songwriters: Earl Humphrey, Greg Jacobs; #11 pop/#7 R&B; 1990. Humpty Hump was a comedic alter ego of Shock G, who was an alter ego of rapper/songwriter/musician Gregory Jacobs. The character combined nerd threads with a large prosthetic nose and birth control glasses while singing in a nasally voice about sex: “I’ll eat up all your crackers and licorice/ Hey yo fat girl, come here, are you ticklish?” “The Humpty Dance” was hooked by a sick, rubbery bassline created by Jacobs, paired with drumbeats sampled from Sly & the Family Stone and Parliament. Rolling Stone, “One of the most potent, re-useable, powerful snares in Nineties music. You’ll stop counting at 200 if you try to take a total of how many songs between 1990 and 2003 just straight-up took this track’s drum ingredient. Like, seriously, this song is the two fish and five loaves of bread of hip-hop. No organization represented George Clinton’s P-Funk rhythm nation better than Shock G and Co.” Do me, baby.

84. “Sleeps with Angels,” Neil Young & Crazy Horse. Songwriter: Neil Young; Did Not Chart; 1994. Neil Young wrote “Sleeps with Angels” after Kurt Cobain quotes his line, “It’s better to burn out than to fade away” in his suicide note. Young, “When he died and left that note, it struck a deep chord inside of me. It fucked with me. I wrote some music for that feeling.” The music is suitably slow, roiling, and dark, as Neil notes that “He sleeps with angels/Too soon.” Rock critic Mark Johnson, “It is a terrifying song of feedback and distorted vocals. Totally harrowing, but essential listening.” David Fricke, “With a daring and sensitivity that go far beyond the sincerest form of flattery, Young has paid an affecting tribute to Cobain – his life, his grief, his accomplishments and everything he left unsaid and undone – by bringing it all, briefly, back to life in music.”

83. “Sick of Myself,” Matthew Sweet. Songwriter: Matthew Sweet; #58 pop; 1995. After working with guitarist Robert Quine on his 1991 Modern Rock hit “Girlfriend,” Matthew Sweet brought Television guitarist Richard Lloyd into the alternative rock era on the meaty power pop rocker “Sick of Myself.” Rock critic Matthew Greenwald, “Opening with a series of righteous Who-like power chords, ‘Sick of Myself’ shows off Matthew Sweet’s strength in writing a muscular rocker. Underneath the distorted guitars and powerful drumming is an effervescent pop melody that would easily be at home in a softer arrangement, yet it works wonders with Sweet’s wall of noise here. Lyrically, the song is a twist on a straight-ahead love song and is filled with a self-effacing vulnerability that is extremely effective. A great start to a fine album, it’s also one of the great pop statements of the mid-’90s.” Sweet on the self-deprecating lyrics, “It got a sort of unusual, slightly twisted sentiment, into something that became a radio song. That was something I was really proud of.”

82. “Sick Day,” Fountains of Wayne. Songwriters: Chris Collingwood, Adam Schlesinger; Did Not Chart; 1996. Fountains of Wayne were experts at character studies, often providing a humorous perspective on mundane life situations. Jon Dolan of Rolling Stone, “’Sick Day’ is a beautifully melancholic ode to a Jersey girl taking the PATH train into Manhattan to fake her way through another day of temp-job purgatory – ‘making the scene with her coffee and cream.’ It’s simply the greatest song ever written about that sweet, slight moment of post-college, pre-career stasis, when nothing seems necessary, everything seems totally attainable yet weirdly beneath you, and even the dullest 9-to-5 distractions come haloed in ‘hey, whatever’ possibility. Every detail is perfect, from the busted copy machine to the wannabe worker bee in the next cube.”

81. “Me and Billy the Kid,” Joe Ely. Songwriter: Joe Ely: Did Not Chart; 1990. After several years of being the next big thing that never materialized and having plowed through The Flatlanders songbook, Joe Ely retreated into his Texas comfort zone during the 1980s. He released this comical tale of his misadventures with and against Henry McCarty (they never got along) on his 1987 Hightone release “Lord of the Highway,” but a better version kicks off his 1990 “Live at Liberty Lunch” album. Ely has said that he was inspired to write the song after visiting a “Billy the Kid” museum in New Mexico that clearly advertised fiction as history. Ely, “All the accounts that I’d read of him, you really couldn’t tell which account was on the level and which wasn’t. So I decided to make up my own story.” “Me and Billy the Kid” has been covered by Pat Green and Marty Stuart and is the only song I know that rhymes “La Cucaracha” with “Chihuahau.”