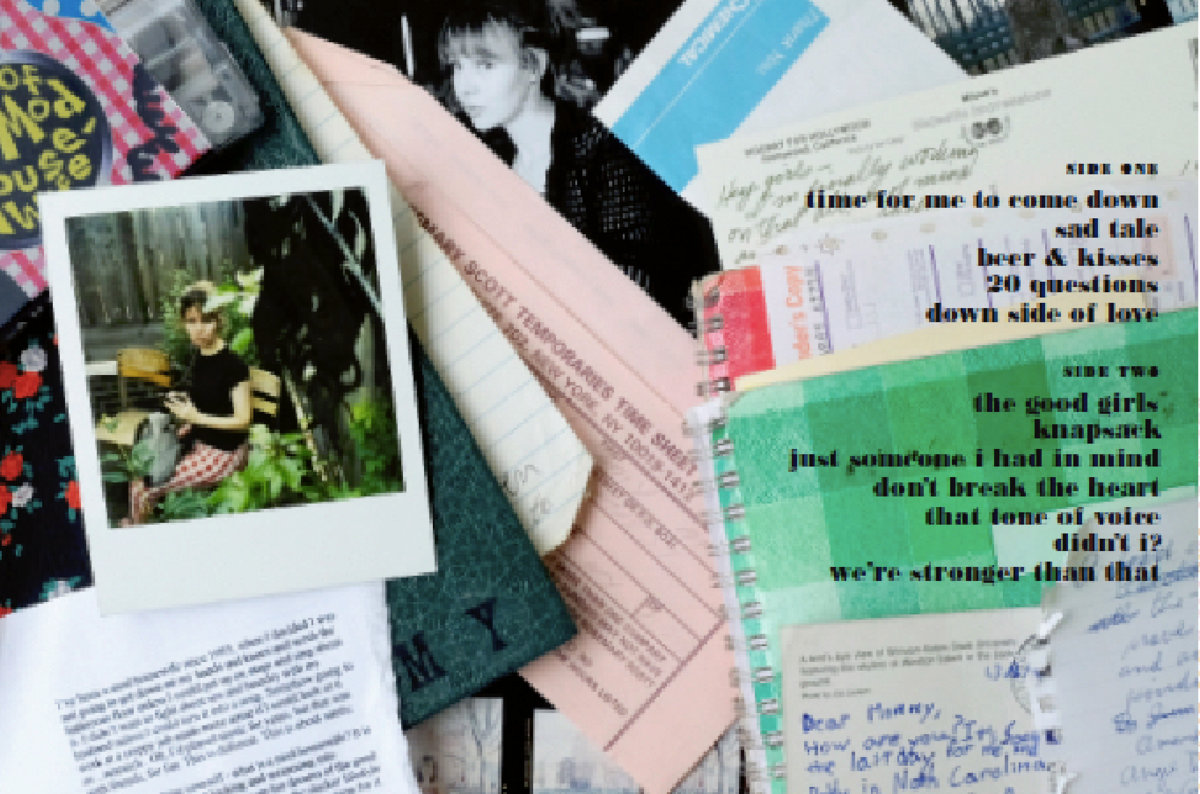 70. “Rid of Me,” PJ Harvey. Songwriter: Polly Jean Harvey; Did Not Chart; 1993. “Rid of Me” is an anguished mixture of anger and bewilderment toward a cheating lover. The narrator plans on using her sexuality, determination, and her betrayer’s potential sympathy to keep him in the fold. Harvey, “When I wrote ‘Rid of Me,’ I shocked myself. I thought, ‘Well, if I’m shocked, other people might be shocked.’ The sound of the words was powerful, and the rhythm felt clean and simple to roll off the tongue. I knew that this was the type of song I was trying to write. I knew I wanted to work with (producer) Steve Albini from listening to Pixies records, and hearing the sounds he was getting, which were unlike any other sounds that I’d heard on vinyl. I really wanted that very bare, very real sound. I knew that it would suit the songs. It’s like touching real objects or feeling the grain of wood. That’s what his sound is like to me. It’s very tangible. You can almost feel the room.”

69. “Cannonball,” Breeders. Songwriter: Kim Deal; #44 pop; 1993. Talk about a left field hit, “Cannonball” is filled with smart hooks, tempo changes, memorable lines, and captures a vibe of happiness in a bottle (or from a bong). It’s the “Walking on Sunshine” of the alt-guitar era. Pop Matters on this bubblegum punk tune that feels like a brilliantly executed high school prank, “’Cannonball’ is loaded with impudence, exuberance and mischievous charm.” Kim Deal reflecting on the song’s commercial potential, “Did we record a song that opened with me saying, ‘Check 1-2,’ and then loads of vocal feedback from my brother’s harmonica mike, and think, ‘This is destined for radio?’ That was the sort of thing that didn’t get you played on the radio then. We thought no one would play it.” Nitsuh Abebe of Pitchfork on the results, “’Cannonball’ sounds a little like (Kim) Deal bursting with a billion great ideas that couldn’t be neglected anymore.”

68. “Don’t Rock the Jukebox,” Alan Jackson. Songwriters: Alan Jackson, Roger Murrah, Keith Stegall; #1 country; 1990. While George Jones couldn’t get airplay in the early 1990s, he was still a hip artist to name check. By osmosis, theft, or coincidence, Alan Jackson picked up the George Jones/Rolling Stones rhyme that the Bellamy Brothers had used on “Kids of the Baby Boom” to describe his sad sack music preference. The title phrase came when either bassist Roger Bob Wills (quite the name, eh?) or Jackson leaned on an unsteady jukebox while playing in a small town honky tonk. Jackson brought the title to Nashville songwriters Roger Murrah and Keith Stegall and left with the number one country song of that year. Smartest lyrical moment – the statement, “I ain’t got nothin’ against rock ‘n’ roll,” welcoming his audience to embrace both genres.

67. “Unseen Power of the Picket Fence,” Pavement. Songwriters: Scott Kannberg, Stephen Malkmus; Did Not Chart; 1993. There were many elements to Pavement’s weird charisma during the 1990s, part of which was bringing a stoner rock sense of humor into the world of lo fi indie guitar rock. “Unseen Power of the Picket Fence” was part of the 1993 AIDS benefit album “No Alternative” and was recorded during the “Crooked Rain, Crooked Rain” sessions. Using what sounds like a grunge rewrite of the riff to Eric Clapton’s “Let it Rain,” “Unseen Power” is either a salute to or a piss take on R.E.M. (“The singer, he had long hair/And the drummer he knew restraint/And the bass man he had all the right moves/And the guitar player was no saint”) that evolves into Sherman’s march through Georgia (“G-G-G-G-Georgia”) during the Civil War. Bizarre and hysterical.

66. “Self Esteem,” The Offspring. Songwriter: Dexter Holland; Did Not Chart; 1994. The Southern Cal punk band The Offspring, fronted by future molecular biologist PhD Dexter Holland, often brought a comedic edge to their aggressive guitar music. “Self Esteem” dumps typical macho male rock posturing into a garbage bin as the narrator can’t break free from an emotionally abusive girlfriend, making her dessert instead of making her go away. Dexter Holland, “The thing where late at night she knocks on my door was real, and practicing all the things you would say was a funny thing that had happened before.” Chuck Eddy, “After its “Iron Man”-“Pictures of Matchstick Men”- “Beavis and Butthead” opening chant, ‘Self Esteem’ is said to sound a lot like Nirvana. If it was a Nirvana song it’d be the second-best one I ever heard; the Offspring have a better sense of humor than Nirvana, and their words make more sense. Holland. who likes Nirvana fine, nonetheless agrees with me about Kurt Cobain’s lyrics: ‘Everybody kept calling him the voice of his generation. but really, I could never figure out what his songs were about.’”

65. “Fade Into You,” Mazzy Star. Songwriters: Hope Sandoval; David Roback; #44 pop; 1993. The sensual, yet woozy, darkness of “Fade Into You” created one of the defining sounds of the 1990s, a kind of blissed out heroin rock. Rock critic Philip Sherburne, “’Fade Into You’ was an unlikely hit – a slow, barroom waltz with a pedal-steel solo. Everything about the song, from Hope Sandoval’s smoky country voice to the slide guitar and honky-tonk piano, gave it a lush, reassuring weight.” Journalist James Weir, “The alternative piece of dream pop became a teenage soundtrack, with its repetitive words of heartache and longing on top of lingering slide guitar and piano. But the band’s guitarist and producer David Roback said they never planned on writing a song that would help define a generation.” Roback, “It was never intended to be a nostalgic song. Unless you were meant to think about nostalgia for the present because it really was about the present.”

64. “Sparky’s Dream,” Teenage Fanclub. Songwriter: Gerard Love; Did Not Chart; 1995. The Scottish band Teenage Fanclub wowed music nerds during the 1990s with their mixture of 1960’s harmonies with 1970’s power pop. Their 1995 minor U.K. hit “Sparky’s Dream” is pure honey, exquisite melodic rock with lyrics about the type of schoolboy love that fuels emotions and fantasies. James Cosby of Pop Matters, “Teenage Fanclub is a power pop group, and ‘Sparky’s Dream’ simply embodies everything great about the genre. That is, the song is a culmination of drums, guitars and harmonies, into what is about as close to pure musical joy as possible, fully sustained for 3:18. ‘That summer feeling…,’ indeed.”

63. “Brimful of Asha,” Cornershop. Songwriter: Tjinder Singh; Did Not Chart; 1997. The U.K. indie pop band Cornershop formed in England in 1991 and had their biggest success with “Brimful of Asha,” a song about film culture in India. (A remixed version by Fatboy Slim was a #1 U.K. pop hit in 1998, but I prefer the original). The lyrics are about people finding hope during difficult times via movies and music (“Everybody needs a bosom for a pillow, mine’s on the 45”). Rock critic Sam Walton, “(A) serene, tumbling groove of a song which remains both one of the crispest and one of the most original exultations of music’s therapeutic capability. In common, ironically, with a lot of Britpop, the song is unabashedly nostalgic, name-checking bygone heroes and record labels, but the act of (Tjinder) Singh taking a piece of his particular heritage and then reshaping it to become part of the general pop lexicon feels so generous that any sentimentalism is quickly forgiven. When the imagined ‘77,000-piece orchestra set’ surfaces at the song’s end, it must be a stony heart that doesn’t flutter a little.”

62. “Knapsack,” Amy Rigby. Songwriter: Amy Rigby; Did Not Chart; 1996. Amy Rigby wants to pour her heart out to a bookstore clerk that she has an obsessive crush on in “Knapsack,” yet can’t find the courage to talk to him. At least, she got to see him touch her book bag. Rigby, from her wonderful biography, “Girl to City,” “I’d written the song during one of my temp assignments near Wall Street. I played my Guild acoustic and sang, remembering the morning climb up the subway stairs; the daily boredom of my cubicle at Standard & Poor’s and the jolt of pleasure from a second’s encounter with a bag check guy in the Barnes & Noble superstore. I’d felt like Tom Petty when I wrote the song, heroic, picturing office workers all over the city standing up from their ergonomic chairs to shout “I’m alive!” like they were in a bad music video, dancing in white shirts, Ann Taylor sale rack skirts and Payless pumps. I’d played the song live with a band but decided it had to be recorded solo. When I finished I felt like I’d said something that maybe hadn’t been said in a song before.”

61. “French Disko,” Stereolab. Songwriters: Tim Gane, Laetitia Sadier; Did Not Chart; 1993. Stereolab is a U.K. band, frequently classified as “avant-pop,” known for their heavily layered vocals and keyboards. Rob Harvilla of The Ringer website on “French Disko,” “An early-’90s garage-pop call to arms, all grimy joy and stormy pathos, that kicks off with Laetitia Sadier singing ‘Though this world’s essentially an/Absurd place to be living in/Doesn’t call for bubble withdrawal.’ The chorus, the simplest and purest of the band’s three-decade career, is a group chant of ‘La résistance!’” Author Ian Martin, “The group’s unique and instantly recognizable sonic identity was Laetitia Sadier’s vocals, which simultaneously embodied a cool detachment and an unaffected romanticism. Sadier’s vocal foil for much of the ’90s was keyboard player Mary Hansen, and the interplay between the two singers helped to define the group up until Hanson’s death in a road accident in 2002. Their combination of deadpan delivery and breezy ‘ba-ba-ba’s reflected a broader dynamic within the band’s music between pop’s desire to give you everything all at once and an avant-garde wariness of making things too easy.”