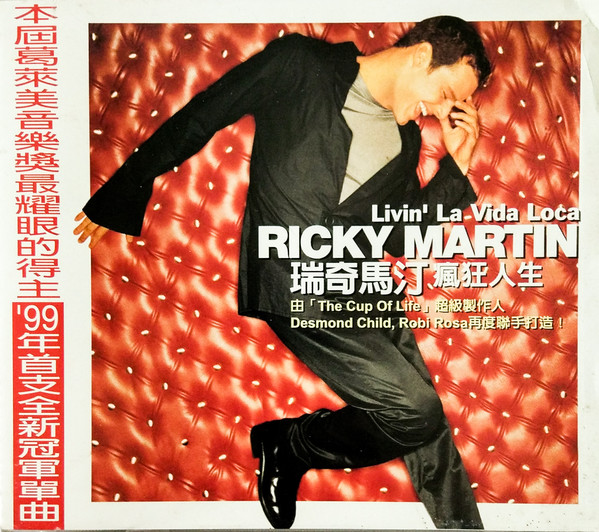 440. “Livin’ La Vida Loca,” Ricky Martin. Songwriters: Draco Rosa, Desmond Child; #1 pop; 1999. “Livin’ La Vida Loca” is a peak of bombastic ridiculousness in pop music, but still way too fun to dismiss. Songwriter Desmond Child, “Frank Sinatra’s music was coming out of the airwaves, and we were all of a sudden into this Rat Pack idea, and also the Latin Elvis concept that we had for (Ricky Martin). So we put that into the songs, as well – there was a swing aspect to it. So the verses were more like that, and then the choruses were all out rock anthems, with horns. Because horns had fallen out of favor, we brought horns back. The song worked well with Ricky’s mischievous side.” Martin reflected in 2017 that the song “broke boundaries and brought people together.” Martin became the late 1990’s equivalent to George Michael of the 1980s – a temporarily closeted gay singer who was a sex symbol for his female fans.

439. “Things You’ll Keep,” The Apartments. Songwriter: Peter “Pops” Walsh; Did Not Chart; 1995. Songwriter Peter Walsh formed the Apartments in 1978, left that band for a stint with The Go-Betweens, and has been working with various musicians using the Apartments name since 1984. “Things You’ll Keep” is a chronicle of romantic regrets, hooked by a trumpet from the Bacharach and David playbook. From the Sacred Cowpats blog, “The Apartments’ third album showed that very little had changed in the band’s world and any passing trends, such as grunge, shoegaze, Britpop etc., had not rubbed off on them one bit. Opening with a forlorn trumpet, ‘Things You’ll Keep’ hits that moderately miserable note firm in the solar plexus, all down-strummed guitars and Peter Milton Wash singing about thinking ‘there was a way out, so you took it’ in a generally self-pitying way.” Sadly beautiful as Paul Westerberg would say. In the modern world irony department, if you google “Things You’ll Keep, Peter Walsh,” you will likely discover a Los Angeles based “clutter organizer.”

438. “Get Down, River,” The Bottle Rockets. Songwriter: Brian Henneman; Did Not Chart; 1998. Bottle Rockets frontman Brian Henneman was raised in Festus, Missouri, a small town south of St. Louis on the Mississippi River. Henneman played in local bands named Blue Moon and Chicken Truck, the latter name an ode to John Anderson, before becoming a roadie for Uncle Tupelo and getting his own record deal. “Get Down, River” from the 1998 “Leftovers” album is a flood aftermath folk style song, with Henneman noting, “It looks like the Gulf of Mexico, down by the Texaco.” Kelly Dearmore of the Dallas Observer, “Just like the Boss singing about Jersey, ‘Get Down, River’ is a hometown song that only a group closely tied to that land could believably offer. When Henneman sings, ‘Once again, you’ve messed up this whole town,’ it’s a visible, exhausted anger aimed directly at the Mississippi River that has flooded and ruined so many lives of families the group has known over the years.”

437. “Ocean,” Sebadoh. Songwriter: Lou Barlow; Did Not Chart; 1996. The breakup song “Ocean” begs to be labelled as “bouncy,” although Lou Barlow went higher up the food chain with “inspired.” Rock critic extraordinaire Mark Deming on this minor Modern Rock chart hit, “Built around a scrappy but charging guitar figure that split the difference between pop jangle and rock crunch, ‘Ocean’ is yet another tale of a failed relationship from Barlow, but with a crucial difference – in ‘Ocean,’ Barlow is the dumper rather than the dumpee and he sounds more than a bit smug and snide about it, tossing off laugh lines like ‘I hesitate to say that you’re a liar/ ‘Cause I never tell the truth myself’ and kiss-offs like ‘I’m leaving you to you, or someone else.’ While Barlow’s tone is a bit bitter, there’s an almost smug undercurrent that makes it sound as if he’s having a little more fun than is charitable giving his girlfriend the old heave-ho, and the melody boasts more than enough buoyancy to make Barlow’s tribulations sound almost jaunty.”

436. “Motorcycle Emptiness,” Manic Street Preachers. Songwriters: James Dean Bradfield, Nicky Wire, Sean Moore, Richey Edwards; Did Not Chart; 1992. The Manic Street Preachers formed in Blackwood, Wales in 1986 and released their debut album, the politely titled “Generation Terrorists,” in 1992. Their five 1990’s studio albums all went gold or platinum in the U.K., but they’ve never touched any U.S. pop chart. “Motorcycle Emptiness,” a U.K. Top Twenty hit, has a blasting guitar riff on top of a steady Brit pop sound that masks the hopelessness of the lyrics (“Organize your safe tribal war/Hurt, maim, kill and enslave the ghetto”). Guitarist James Dean Bradfield, “(Producer) Steve Brown said it needed a solo, and he just left me in the studio and gave me an hour. He came back and went: ‘You’re a guitar god now!’ It sounds corny, but he made this white-trash Taff feel good. He told me I had to find my Slash moment. That’s good production, as far as I’m concerned.”

435. “Dub Be Good to Me,” Beats International. Songwriters: Norman Cook; James Harris III; Terry Lewis; #76 pop; 1990. After leaving the Housemartins and before rechristening himself as Fatboy Slim, Norman Cook scored a #1 U.K. hit with “Dub Be Good to Me,” a combination of the 1983 U.S. dance hit “Just Be Good to Me” by the S.O.S. Band and the bassline from “The Guns of Brixton” by The Clash. Blogger Tom Ewing, “The latent cheekiness of the track – its lifts so flagrant, its components so random – gives it a warmth, a sense of reassurance that despite singer Lindy Layton’s desperation everything in Beats International’s world is going to be alright. So ‘Dub Be Good’ ends up rather less polished or poised than some of its obvious models – Soul II Soul, for instance. There’s room for comfort in pop as well as intensity, and what’s also on offer here is the delight of seeing diverse elements alchemised into a confident, magnificent modern hit.” Norman Cook, “It was (vocalist Layton) Lindy’s idea to do a cover of SOS’s Band’s hit ‘Just Be Good to Me.’ I knew it would go well with other beats because I’d tried it as a DJ. I also wanted to do something slower than the current house music, yet something funky you could get into to.”

434. “No Time to Kill,” Clint Black. Songwriters: Clint Black, Hayden Nicholas; #3 country; 1993. Clint Black’s 1989 debut album was titled “Killin’ Time,” but he flipped his own script with the “No Time to Kill” record in 1993. Like Pink Floyd on “Dark Side of the Moon,” Black is pondering the undefeatable power of the clock on “No Time to Kill,” one of the more philosophical moments in country radio history. Black resolves to lead a life free of worry and hurry, knowing his days are numbered no matter how they are spent. Also, Jerry Douglas, one of the most talented session musicians in the genre’s history, deserves a round of applause for the outro dobro solo that heightens the emotional weight of the lyric.

433. “Crazy,” Seal. Songwriter: Seal; #7 pop; 1990. According to U.K. singer/songwriter Seal, known to his parents by the name Henry Olusegun Adeola Samuel, his international breakthrough hit “Crazy” was inspired by the fall of the Berlin Wall and the Tiananmen Square massacre. Seal, “I felt the cycle had reached its apex. I felt the world changing and I felt profound things happening.” Producer Trevor Horn, “When we made the first Seal album, we spent two months doing ‘Crazy’ – and then about two months on the whole album. ‘Crazy’ wasn’t an easy record to make, because we were aiming high.” From the Daily Guru Blog, “In many ways, the musical arrangement found on ‘Crazy’ stands as the perfect representation of the shift from the music of the 1980’s to the sounds that would dominate the next decade. Much of the orchestration, composed by Seal along with producer Guy Sigsworth, is based in the core of the style of the Seal had been exploring to that point, with the majority of the sounds coming from the world of house music and perhaps even an almost psychedelic tinge. Yet regardless of where the sounds originated, the fact of the matter is that they create a texture and mood that was a far cry from nearly anything else being recorded at the time. The soundscapes are rarely anything short of hypnotic, and yet there is a delicacy and almost gentle lull that completely captivates the listener from beginning to end.”

432. “Don’t Sweat the Technique,” Eric B & Rakim. Songwriters: Eric Barrier, William Michael Griffin Jr.; #14 R&B; 1992. Eric B sounds like he’s rapping on top of a jazz combo on “Don’t Sweat the Technique,” the title track to the influential duo’s last album and a #14 R&B/#1 Rap hit. The rhythm section was smartly constructed, taking the stand-up bass sound from “Queen of the Nile” by the Chicago jazz instrumental ensemble Young Holt Limited and pairing it with beats from Kool & the Gang’s 1969 album track “Give It Up.” Jesse Ducker of Albumism, “Rakim executes his smooth yet sharp flow, excoriating all those who attempt to imitate his style: ‘They wanna know how many rhymes have I ripped and wrecked/But researchers never found all the pieces yet/Scientists try to solve the context/Philosophers are wondering what’s next/Pieces are took to labs to observe them/They couldn’t absorb them, they didn’t deserve them/My ideas are only for the audience’s ears/For my opponents, it might take years.’ The result is one of the better lyrical demonstrations of pure skill of the ’90s.”

431. “Everybody Everbody,” Black Box. Songwriters: Daniele Davoli, Mirko Limoni, Valerio Semplici; #8 pop/#2 R&B; 1990. Martha Wash has had a long career as a dance music vocalist, although often uncredited for her work and having to file lawsuits for compensation. Her career began as part of San Francisco’s Two Tons of Fun, backing the disco singer Sylvester and that act evolved into The Weather Girls of “It’s Raining Men” fame. She was ubiquitous on radio from 1989 to 1991 as part of the acts C+C Music Factory, who used a young model in their videos instead of Marsha Wash, as well as for the female dance act Seduction, and singing on “Everybody Everybody,” a funky international dance hit with a keyboard hook reinforced by a horn section for the Italian act Black Box. David Raposa of Pitchfork, “While Wash’s contributions to ‘Everybody Everybody’ are essential, it’s the borrowed bit Black Box presumably didn’t get sued for- the sample of Cameo lead singer Larry Blackmon’s unmistakable “’owwww’- that separates this track from the hundreds of pop-house bandwagoneers that followed.”