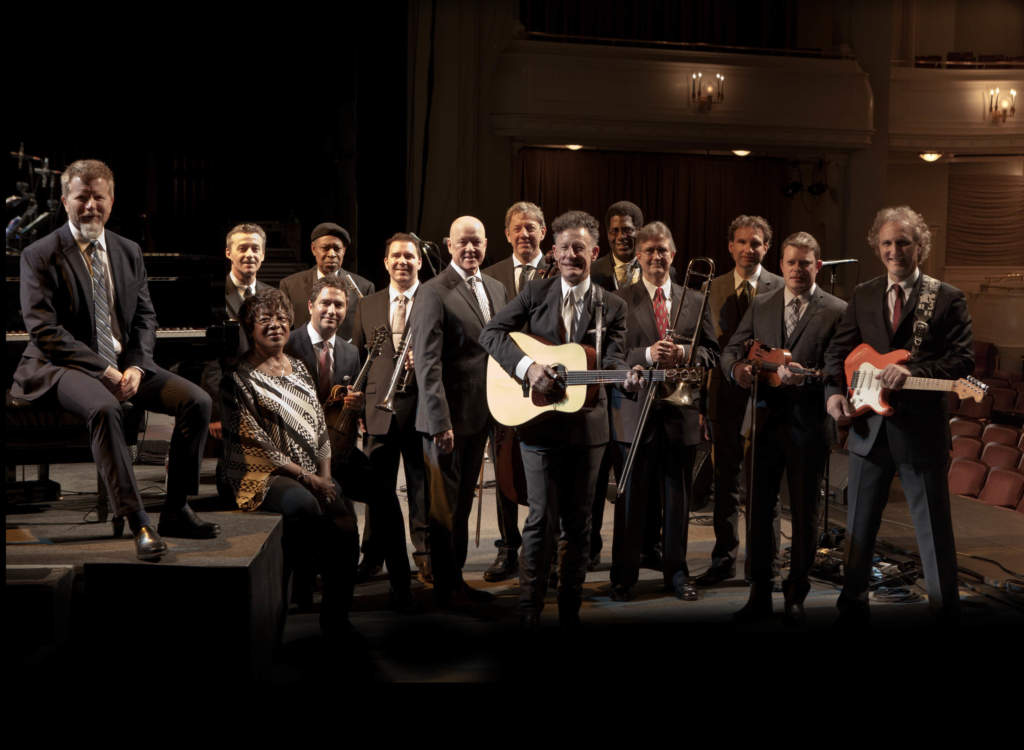 430. “Real Real Gone,” Van Morrison. Songwriter: Van Morrison; Did Not Chart; 1990. “Real Real Gone” was a return to the upbeat R&B that Van Morrison recorded in the early 1970s, such as “Domino” and “Wild Night.” Van namechecks Wilson Pickett, Solomon Burke, James Brown, and Gene Chandler in the outro. Rock critic Thom Jurek, getting all metaphysical, “With its raucous horns, B-3, and crackling hi-hat and snare work, ‘Real Real Gone’ comes from the shouting R&B singer we’ve known since ‘Moondance.’ It’s addressed to a nameless other, with a call-and-response horn section answering his every line like it was the gospel truth. The slippery bridge-like lines at the ends of the verses and his invocation of truths from the gods of soul suggest he’s almost found the truth in these moments from his past, a past that haunts him and whose secrets pour from his mouth when he sings, though they elude him.”

429. “Hillbilly Guitar Boogie,” Sleepy LaBeef. Songwriter: Eddy Clearwater; Did Not Chart; 1996. Smackover, Arkansas native Sleepy LaBeef always seemed to live in his own cosmic, alternative rockabilly dimension. His recording career spanned over five decades, but he never had a Top 40 hit on any chart; he might be best known for the lengthy profile written about him by Peter Guralnick in his book “Lost Highways: Journeys and Arrivals of American Musicians.” Coincidentally, Peter Guralnick’s son Jake Guralnick produced Sleepy’s 1996 album “I’ll Never Lay My Guitar Down,” which includes a cover of Chicago blues guitarist Eddy Clearwater’s “Hillbilly Guitar Boogie.” The song is a first rate Chuck Berry rip and pianist Dave Keyes knew how to channel the crucial Johnnie Johnson sound.

428. “Chasin’ That Neon Rainbow,” Alan Jackson. Songwriters: Alan Jackson, Jim McBride; #2 country; 1990. Georgia native Alan Jackson worked odd jobs for over a decade while performing in clubs. After receiving encouragement from Glen Campbell, he moved to Nashville at the age of twenty-seven and was signed with a major label in 1989. With his neo-traditional sound and first class songwriting skills, Jackson became one of the biggest acts of the 1990s. The country Top Five hit “Chasin’ That Neon Rainbow” was autobiographical, a number co-written with Nashville pro Jim McBride (the two also penned Jackson’s 1993 #1 country hit “Chattahoochie”). Jackson, “We were talking about my life in Georgia and the experience of playing the honky tonk circuit. I remembered a radio that my daddy won when I was a young child and how my mama used to sing to my sisters and me. I also remembered how my mama hated for me to play in the bars. All those things set the story in motion, and within a few sessions, my life chasing that neon rainbow was set to music.”

427. “93 ‘Til Infinity,” Souls of Mischief. Songwriters: Adam Carter, Tajai Massey, Damani Thompson; #72 pop/#65 R&B; 1993. The Souls of Mischief are an Oakland based hip hop group, who are part of the Hieroglyphics Crew founded by Del the Funky Homosapien. “93 ‘Til Infinity” samples Panamanian jazz drummer Billy Cobham, with the overall vibe being more street smart than hardcore gangsta. Rolling Stone, “The Oakland collective’s lone hit was a transporting blast of youthful talent. Over amped-up sax and marimba, A-Plus, Tajai, Opio and Phesto traded flicking, word-spilling vignettes with uncanny exuberance.” Phesto (nee Damani Thompson), “Now you have younger generations who were born in ’93. They’re like, ’93 ’til infinity.’ It means so many different things to so many different people.”

426. “Conversation with the Devil,” Ray Wylie Hubbard. Songwriter: Ray Wylie Hubbard; Did Not Chart; 1999. Ray Wylie Hubbard lived off his reputation in Texas for years after Jerry Jeff Walker covered “Up Against the Wall, Redneck Mother” in 1973. He spent most of the next few decades getting blitzed and the quality of his recorded music and live gigs reflected that reality. A low point was getting a regular booking at a “lingerie club” near Dallas’s Love Field airport. Luckily, Hubbard turned his life around, after finding sobriety and a good woman. On “Conversation with the Devil,” Hubbard chats with Satan, complimenting him on his fiddle solo on “The Devil Went Down to Georgia,” and learns that the fiery lake is filled with preachers, politicians, right wing conservatives, and country program directors. After waking from his bad dream, Hubbard spurns red meat.

425. “Little Fluffy Clouds,” The Orb. Songwriters: Martin Glover, Alex Paterson, Steve Reich; Did Not Chart; 1990. The Orb is a long running ambient house music venture with the only permanent member being English musician Alex Paterson. Their 1990 record “Little Fluffy Clouds” takes the musings of an extremely stoned sounding Rickie Lee Jones (“the sunsets were purple and red and yellow and on fire, and the clouds would catch the colors everywhere; that’s uh, neat ’cause I used to look at them all the time, when I was little”) and combines those thoughts with serene samples from Steve Reich’s “Electric Counterpoint.” Tom Ewing of Pitchfork, “It’s a snapshot of a moment when UK rave culture and the great outdoors went together naturally. That’s why it’s travelled and resonated when the rest of ‘ambient house’ is forgotten: subgenres come and subgenres go, but summer is forever.”

424. “So What’cha Want,” Beastie Boys. Songwriters: Michael Diamond, Adam Horovitz, Adam Yauch; #93 pop; 1992. Aarik Danielson of Transverso Media, “’So What’cha Want’ exists within the pantheon of signature Beasties songs, alongside the likes of ‘Brass Monkey,’ ‘Sabotage,’ ‘Sure Shot,’ and ‘Intergalactic.’ It just might be their high-water mark. Money Mark’s organ is filthy; drums echo in a sort of self-contained call-and-response. And the band finds a flawless mix of braggadocio and goofiness that is embodied in, for my money, the best Beasties lyric of all time, courtesy of Mike D: ‘Y’all suckers write me checks and then they bounce/So I reach into my pocket for the fresh amount/See I’m the long, leaner Victor the Cleaner/I’m the illest motherfucker from here to Gardena.” Jeff Weiss of L.A. Weekly, “But until 1992’s ‘Check Your Head’ (album), no one had artfully weaved hardcore punk, turntablist scratching, ’70s funk, ’80s rap, Biz Markie and Ted Nugent into a definitive statement — one that would have pointed toward the future of rap if it wasn’t so impossible to replicate.”

423. “U2,” Negativland. Songwriters: Bono, Adam Clayton, The Edge, Larry Mullen, Jr.; Did Not Chart; 1991. Negativland was a group of merry pranksters from the Bay Area who created sonic collages from samples, interviews, and general provocation of others. In the late 1980s, they created a false press release, asserting a teenager had murdered his family after listening to their record “Christianity is Stupid.” This fabrication, constructed to get the band out of a potentially money losing tour, was picked up by several news outlets as factual. They got themselves into long term legal trouble in 1991 with “U2,” a record that makes fun of the title named band while inserting tapes of Casey Kasem having a meltdown while taping a Top 40 segment. Negativland’s Make Hosler in 1995 on Kasem and their legal woes that made the song commercially unavailable, “I spoke to someone who was a DJ in Los Angeles for many years and who actually worked in the same building as Kasem, and he said the outtakes that we used on our single were more like an average day; they were not that out of the ordinary. The engineers in this building were really terrified to have to go work with Kasem, because that’s how he treated them. Now I don’t if he still does that. In fact, I would have a feeling, after all that’s happened with our record, that he’s probably a lot nicer to all those engineers. (laughs) So my understanding is that by flip-flopping his position on our record and basically suppressing it after saying it was a free speech issue, Casey Kasem’s not just covering up a bad day; he’s covering up a whole dark side of his personality.”

422. “The Obvious Child,” Paul Simon. Songwriter: Paul Simon; #90 pop; 1990. Cameron Scheetz of the A.V. Club on this celebration of percussion, “Following the success of the ‘Graceland’ album, which was influenced by the sounds of South Africa, Paul Simon did some traveling through South America and was particularly tickled by the bombastic, repetitive drumming of Olodum, an Afro-Brazilian cultural group. For his 1990 album ‘The Rhythm of The Saints,’ Simon recorded Olodum performing live and later structured some of his tracks around the group’s rhythms. Album opener ‘The Obvious Child’ is the perfect confluence of the wild, frenetic drumming and Simon’s folksy melodies. The drumbeat drills right from the beginning and never lets up, only softening every so often to let Simon’s poetic lyrics soar.”

421. “That’s Right (You’re Not from Texas) (Live),” Lyle Lovett. Songwriters: Lyle Lovett, Willis Alan Ramsey, Alison Rogers; Did Not Chart; 1999. It’s not a cheap ticket to see Lyle Lovett, probably because he’s feeding seventeen musicians and vocalists who comprise “His Large Band.” Lovett released his “Live from Texas” album in 1999, including “That’s Right (You’re Not from Texas)” a song written by Lovett, Willis Alan Ramsey (best known for writing “Muskrat Love”), and Ramsey’s wife Alison Rogers. The number is a showcase for Lovett’s Western swing meets singer/songwriter with Baptist choir raise the roof testifying sound. Despite all the hype, 98% of Texas is either barren or covered with strip malls and fast food joints. That other 2% is worth the exploration.