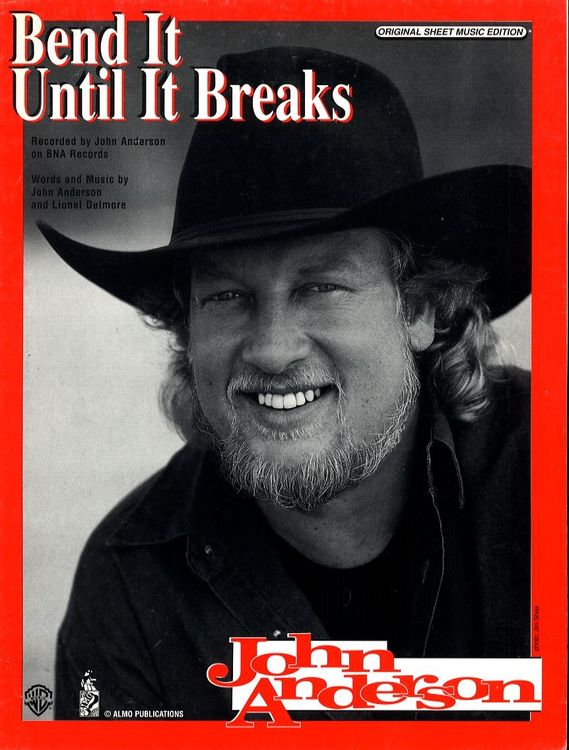 420. “All Men Are Liars,” Nick Lowe. Songwriter: Nick Lowe; Did Not Chart; 1990. Nick Lowe has always been better off relying on wit over sincerity and he had his best song of the 1990s with the bloke skewering “All Men Are Liars,” which includes a takedown of pop singer Rick Astley (rhymes with “ghastly”). Nick Lowe biographer Will Burch, “Clocking in at around three-and-a-half minutes, ‘All Men Are Liars’ is a bold and flagrant statement, laced with much amusing, internal rhyme, resolving with the conclusive pay-off, ‘And that’s the truth.’ The knack of being able to write such stuff is a rare gift born out of considerable confidence, an acute sense of humor and much lateral thought. All men ARE liars; the theory may not be scientifically proven, but one suspects it is true. And packed in a three-minute song it makes for one hell of a premise.”

419. “Bend It Until it Breaks,” John Anderson. Songwriters: John Anderson, Lionel Delmore; #3 country; 1994. Songwriter Lionel Delmore had deep roots in country music history, his father Alton and his uncle Rabon comprised the Delmore Brothers, the famous 1930s and 1940s country recording act. Delmore co-wrote John Anderson’s first Top 40 hit, 1978’s “The Girl at the End of the Bar,” his biggest hit, “Swingin’,” and his last Top Ten single, “Bend It Until It Breaks.” Anderson replicates the fiddle sound of “Seminole Wind” on this somber tale of a long suffering cuckold. Anderson, “Lionel Delmore was one of the most important people to me ever in my career as far as advising me and staying on me about writing songs. We both decided to quit our jobs the same day and start writing songs together.” Lionel died of lung cancer in 2002, the year after the Delmore Brothers were inducted into the Country Music Hall of Fame.

418. “Brain Stew,” Green Day. Songwriters: Billie Joe Armstrong, Mike Dirnt, Tré Cool; Did Not Chart; 1996. “Brain Stew” is a heavy handed yet effective reminder that guitar based rock ‘n’ roll was built on simple riffs for decades. Billboard magazine, “On ‘Brain Stew,’ Green Day doubled down on the minimalism of ‘Longview’ and wrote a song that opened like a beginner’s guide to playing electric guitar. But the trio hammers it home in bludgeoning fashion, with one last ‘On my own, here we go’ from Billie Joe leading into a thunderous final minute.” For those about to rock, I salute you.

417. “Meet James Ensor,” They Might Be Giants. Songwriters: John Flansburgh, John Linnell; Did Not Chart; 1994. They Might Be Giants not only want their fans to appreciate James Ensor, a Belgian expressionist painter, but also invite them to “dig him up and shake his hand.” John Flansburgh on the sincerity of a song that sounds like a spoof, “In my art history class, while in college, we were bored and all of a sudden his works came up and we were surprised at how exciting it was. He was an expressionist, like other 20th century expressionist painters, who was ahead of his time and was very eccentric. The line ‘Dig him up and shake his hand’ is actually very specific – a parallel idea to a lot of his paintings which involve resurrections, skeletons and puppets being animated. He became a phenomenon right before the turn of the century. With the song, I’m trying to encapsulate the issues of his life – an eccentric guy who became celebrated and was soon left behind as his ideas were taken into the culture and other people became expressionists.”

416. “Bigger Than the Beatles,” Joe Diffie. Songwriters: Jeb Stuart Anderson, Steve Dukes; #1 country; 1995. The tribute album “Common Thread: The Songs of the Eagles” was a vanity project released in 1993. Don Henley and Eagles manager Irving Azoff collaborated with some of Nashville’s hottest acts to record completely unnecessary Eagles cover tunes and while the record didn’t include any major hits, it still sold over three million copies, a number that shocked the Nashville establishment. It also provided a roadmap that the country radio audience of the 1990s had been tuned into pop and rock music during the 1970s. The Joe Diffie #1 single “Bigger Than the Beatles” reinforces that connection by namechecking Elvis, The Rolling Stones, The Beatles, and the Eagles. It’s strategic cynicism that hits its mark. This was Diffie’s fifth and final #1 country hit and he scored seventeen Top Ten hits between 1990 and 2001. He became a nostalgia touchstone as the subject of Jason Aldean’s 2013 country rap hit “1994” and passed away too young in 2020.

415. “The Sins of Memphisto,” John Prine. Songwriter: John Prine; Did Not Chart; 1991. Asked by producer Howie Epstein to provide additional material for his album “The Missing Years,” Prine delivered one of his absurd yet wise look at aging with “The Sins of Memphisto”: “Sally used to play with her hula hoops/Now she tells her problems to therapy groups/Grampa’s on the front lawn staring at a rake/Wondering if his marriage was a terrible mistake/I’m sitting on the front steps drinking orange crush/Wondering if it’s possible if I could still blush.” Prine’s lyrics work like photo images to create a story that is equal parts comedy and tragedy.

414. “No Depression,” Uncle Tupelo. Songwriter: A.P. Carter; Did Not Chart; 1990. “No Depression” was first recorded in 1936 by The Carter Family and is a comparison of the economic plight of Americans in the 1930s to the spiritual promised land (“I’m going where there’s no depression/To the lovely land that’s free from care/I’ll leave this world of toil and trouble/My home’s in Heaven, I’m going there”). A.P. Carter is generally listed as the songwriter, although some sources attribute the composition to gospel book publisher James David Vaughan. Uncle Tupelo’s version is simple and traditional, with the only instrumentation being bass and guitar. Alex Young of Consequence of Sound on how “No Depression” can be interpreted in different eras, “Although it’s not a revolutionary reading of the song, the inclusion of ‘No Depression’ works on two levels: firstly, it legitimizes Uncle Tupelo’s love of great country music. ‘No Depression’ also gives the album a wry humorous twist: although the Carter Family’s original song is a promise of hope for those just struggling to live through the Great Depression of the 1930’s, in the mouths of two young Midwestern punks, ‘I’m going where there’s no depression’ is a quick-witted jab at the Prozac-munching world of pop psychology disguised as a complaint against Hoover-era economics.”

413. “Ben McColloch,” Steve Earle. Songwriter: Steve Earle; Did Not Chart; 1995. Ben McColloch was a Texas military officer dating back to the 1830s who was killed during the Civil War. Steve Earle sings from the perspective of a reluctant foot soldier on this bitter outing, noting, “I killed a boy the other night who’d never even shaved/I don’t even know what I’m fightin’ for, I ain’t never owned a slave.” Blogger Jon-Erik Gilot, “We feel the confusion and disillusionment that no doubt pervaded the thoughts of men on both sides of the conflict, ultimately leading to the narrator’s desertion the day before the battle at Pea Ridge, where McCulloch was killed by an Illinois soldier. The song offers a Civil War soldier’s full range of emotions in a way which doesn’t always convey in the history books.” Earle penned “Ben McColloch” when he was 19 or 20, circa 1975, a rather remarkable achievement for a budding songwriter.

412. “Ain’t That Lonely Yet,” Dwight Yoakam. Songwriters: Kostas, James House; #2 country; 1993. The first single from Dwight Yoakam’s 1993 multi-platinum “This Time” album, “Ain’t That Lonely Yet” sounds positively Spectorian in its production values as compared to Yoakam’s previous neo-traditional approach. Co-written by Kostas and James House, who scored his own Top Ten hit in 1995 with “This Is Me Missing You,” Yoakam compares a woman to a spider while deciding that his loneliness is better than a reconciliation. House, “We had already been working on another song idea for a couple of hours but it had gotten stale so we decided to take a break. We started talking and Kostas asked me if I was going to get back together with my estranged girlfriend and I said, ‘I ain’t that lonely yet,’ and we looked at each other and said, ‘let’s write that.’”

411. “Torn,” Natalie Imbruglio. Songwriters: Scott Cutler, Anne Preven, Phil Thornalley; #42 pop; 1997. Australia native Natalie Imbruglio has had success as a pop star, model, and actress, to include selling over seven million copies of her 1997 debut album “Left of the Middle.” “Torn,” a song about falling in love with an illusion of a man and dealing with the disappointment when reality hits, was penned by the Los Angeles band Ednaswap and was first recorded by a Danish singer named Lis Sørensen in 1993. Ednaswap recorded a stripped down, angst filled version of “Torn” in 1995, while the international “Imbruglio” cover had a pop arrangement similar to the Lis Sørensen single. Songwriter Thornally on Imbruglio’s version, “The quality to her voice seemed to suit the song because the song is quite anxious, and yet her voice is quite sweet. So, I think that made it an attractive union of emotions.” “Torn” was a much bigger hit than a #42 charting Billboard peak would suggest. The record company didn’t officially release a single version, hoping that audiences would be forced into buying the album. At that time, Billboard had a separate list for “Hot 100 Airplay” and “Torn” was a #1 hit on that chart.